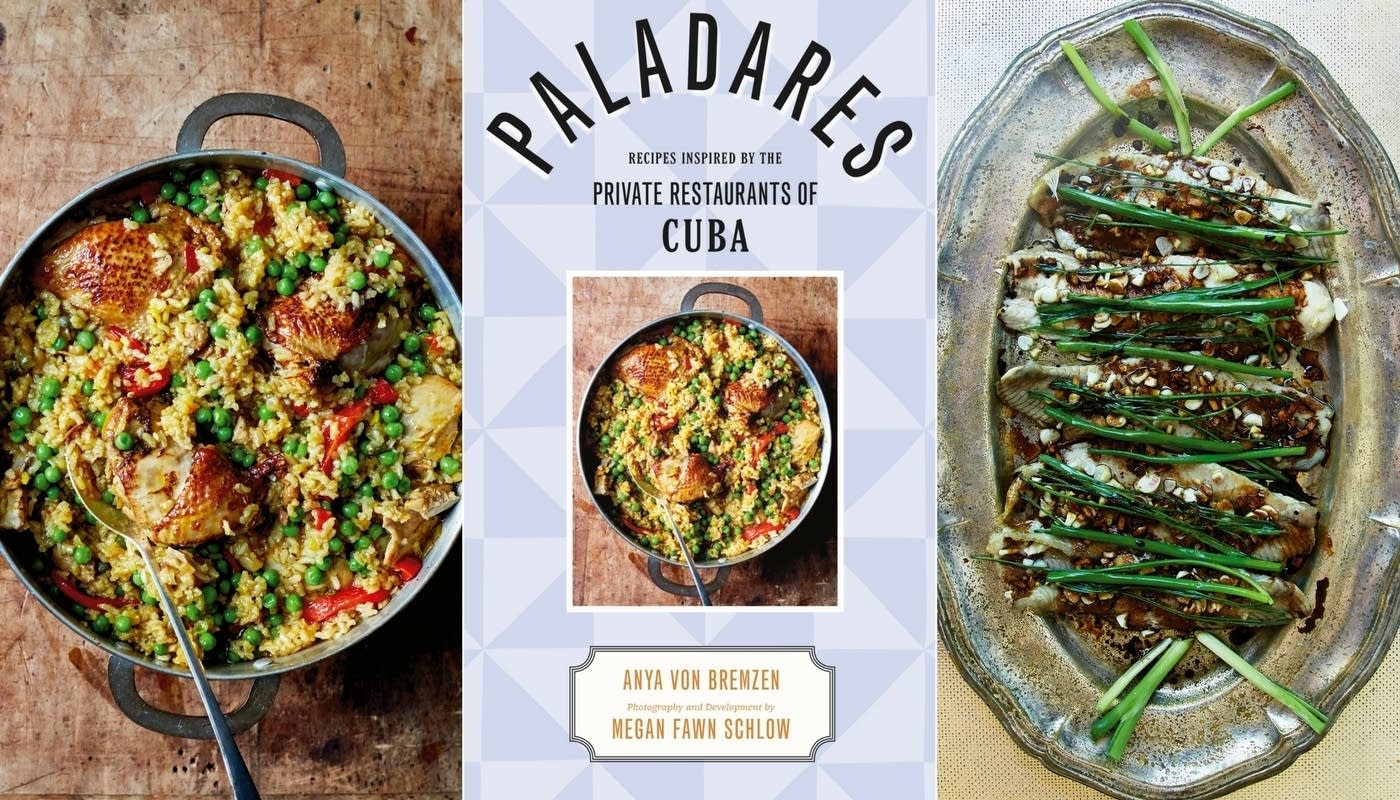 Melissa Clark: Anya, what is a paladar, and did I say that right?

MC: Paladar, and what made you want to write a book on Cuban restaurants and Cuban cuisine?

AVB: Well, paladar is kind of a speakeasy. Plural is paladares. And there is a really interesting backstory. They are essentially our private restaurants in Cuba in a county where everything is essentially state-run, so that's already really interesting. The word comes from a Brazilian telenovela that Cubans were watching like crazy in the 1990s, and that was during the período especial -- there's another Spanish word for you. The special period when the Soviet Union abandoned them, and it led to a total economic collapse. During a time where they were literally having sugar water for dinner, they were watching this sexy Brazilian telenovela about a girl who starts selling sandwiches at Copacabana Beach. It's a Cinderella kind of rags to riches story. It became hugely popular and all the Cubans were salivating over this girl and her success, and here was an island where there was no food and no private enterprise. And then Castro, because the situation was so grim, allowed some measure of private enterprise and that also extended to private restaurants -- the first paladres. They called them paladares after the Brazilian telenovela, and those first enterprises according to law were to run out of people's homes, so they were already like speakeasies. No more than 12 seats and two family members had to be employed.

AVB: Basically, there was no food, so everyone improvised whatever they could get.

MC: Now you are Russian, you are living in New York. What is the connection with you and Cuba other than the Soviet connection? Is there something else?

AVB: You know, it was actually one of those cosmic, kismet situations. I really, really wanted to go to Cuba, hearing that it was changing, and I wanted to catch the last socialist moment to see how that society was. Growing up in Russia, my second language was Spanish. I went to a Spanish speaking school. My mother sent me there and my first crush was on a Cuban boy.  Castro came to our school, and it was like a small little Soviet school for Spanish speakers. Every other week Fidel would come -- and Brezhnev -- a bushy eyed Brezhnev, and a bushy bearded Fidel, you know, they're all locked in this eternal socialist embrace, and he would come for another handout from the USSR.

MC: What was that like, to be there and to see the shortages again and to really be immersed in this culture that was similar to how you grew up, or was it?

AVB: It kind made me believe in time machines. It was an utterly, utterly, surreal experience. The first shock -- literally, I started screaming it was so shocking -- was landing. We landed in a small town because they just inaugurated direct flights in Santa Clara and I saw all those American cars gliding by from the ‘50s. I literally shrieked because it was like landing in Jurassic Park. You've seen one car in a museum and another car, but they're so huge.

AVB: And they have sculpted things on them. I realized that the Ford car is not the American Chevy from the 1960s, the Soviet Larder. Suddenly I felt like I was back in a socialist moment of 1989 when Russia was going through Perestroika and it was already open to the West. There were some things trickling in from the West. There was this double economy where you could operate in dollars. It was the Soviet Union back in a very specific moment, and what was incredible was not just that there was so much Soviet aid economically to Cuba, but that the whole material culture was exported from the USSR. And they still use it, the Soviet refrigerators that I grew up with, the Soviet cars, the Soviet washing machines. Imagine me sitting down on this exotic island, sitting down with a bunch of Cubans my age -- and we're all nostalgic for exactly the same foodstuffs. All the socialists said, “Oh, I remember the Bulgarian stuffed peppers,” and “Oh, remember the Hungarian pickles with a picture of a globe on the cover?” and “Oh, remember the Soviet condensed milk?” It was  the most bizarre thing, and kind of very rewarding because suddenly you see that you are kind of socialist brothers.

MC: The shortages are obviously a big issue. How do the restaurants run when they don't know if they're going to be able to get salt or butter or onions?

AVB: That is the million dollar question. What I decided to do with this book was to sit down with owners of fourteen or fifteen paladares and not get in the way. I let them tell the story. The stories in the book are told in first person, in their voice, as told to me. And the biggest question is: How do you run a restaurant when the word "perdido” is going to be lost? Suddenly, butter is perdido, salt is perdido. One restaurant told me, "You know what my biggest salvation is? The chalkboard." And for me the chalkboard is not a trendy bistro accessory. It's actually something that when the service starts, but two of the dishes have an ingredient missing, I just substitute it. And a Spanish woman who has a paladar said, "Well, you know the fashionable Spanish from Spain and America come to my restaurant and they talk about Cucina de Mercado,” or market cuisine. She said they don't realize that we don't have anything but the market cuisine and market is completely quixotic. So, it's supposedly mango season but the mangoes are not there, and you scramble to go to a hard currency store and get canned peaches instead of the mango puree that you wanted to put in and you substitute it. The other difficulties is that there is no wholesale market and there is no legal export. Basically there's a suitcase trade. If you need something like malted salt, vanilla, spices, everyone brings it in the suitcases and they're not supposed to. They wouldn't even talk to me on the record about it. And then people improvise.  It's literally like you don't know what's going to be on the menu and then all these people suddenly come knocking on your door with great fish.

AVB: You improvise around that.

MC: What are they serving at these paladares? What kind of food is this new Cuban cuisine?

AVB: Again, it's something improvised. For instance, there's one guy who runs two places, they're super hipster, they could be in Brooklyn. He's never been abroad except for Cancun, which kind of blew his mind. But the menu looks completely trendy and up-to-date. I said, "How do you know things?" He said, "Well, my secret is that I have a connection at the Havana airport and he smuggles Spanish food magazines to me.” Or for instance, someone starts serving tataki. Flash seared tuna or beef, you know it's a Japanese preparation. And suddenly everyone is serving tataki. How do they know what tataki is? And they say, "Well, there was some Japanese guy that came in and he showed us what the tataki was.” So there are a lot of USB drives with cookbooks. That's how information travels. Believe it or not avant garde chefs like Ferran Adria is a total guru. Everything has become mythologized and surrounded by legends. You can actually see an evolving cuisine in front of your eyes. Of course they serve classics as well, like beans, rice, and that kind of stuff. But since paladares are expensive for locals, they serve that kind of stuff to foreigners. Locals want beef, they want lobster, they want stuff that you can't get and that is forbidden actually.

MC: Now who goes to these paladares? Is it only tourists or are there locals that can afford it?

AVB: There are a lot of expats and a lot of the paladares are owned by expats and their stories are always the same. They say, "I fell in love with Cuba, I fell in love with a girl or a guy, I stayed and opened a paladar because there were no good places to eat." But there are enough Cubans who travel and bring business associates. A lot of people from Miami, a lot of their relatives that come. There are some older popular ones, even the state-owned ones. There's this famous roast chicken restaurant. And there are these huge reunited families and their relatives from Florida that come and take out their Cuban families there. But some of them are completely full, you can't get in. You actually need a reservation.

MC: And you can make a reservation, just calling them up?

AVB: Yes, or if you can get internet, you can do that.

MC: Anya, thank you so much!

AVB: It's been a gas, thank you so much.

Melissa Clark is a food writer, author, and host of our new podcast Weeknight Kitchen with Melissa Clark. She is a food columnist for The New York Times, and has written more than 30 cookbooks including Dinner in an Instant, Cook This Now, and In the Kitchen with a Good Appetite.
Mint and Pea Frittata with Sumac
Ginger & Lemongrass Salmon with Greens in a Parcel
Eggplant Parmesan
Fettuccine with Mackerel, Sun Gold Tomatoes, and Parmesan