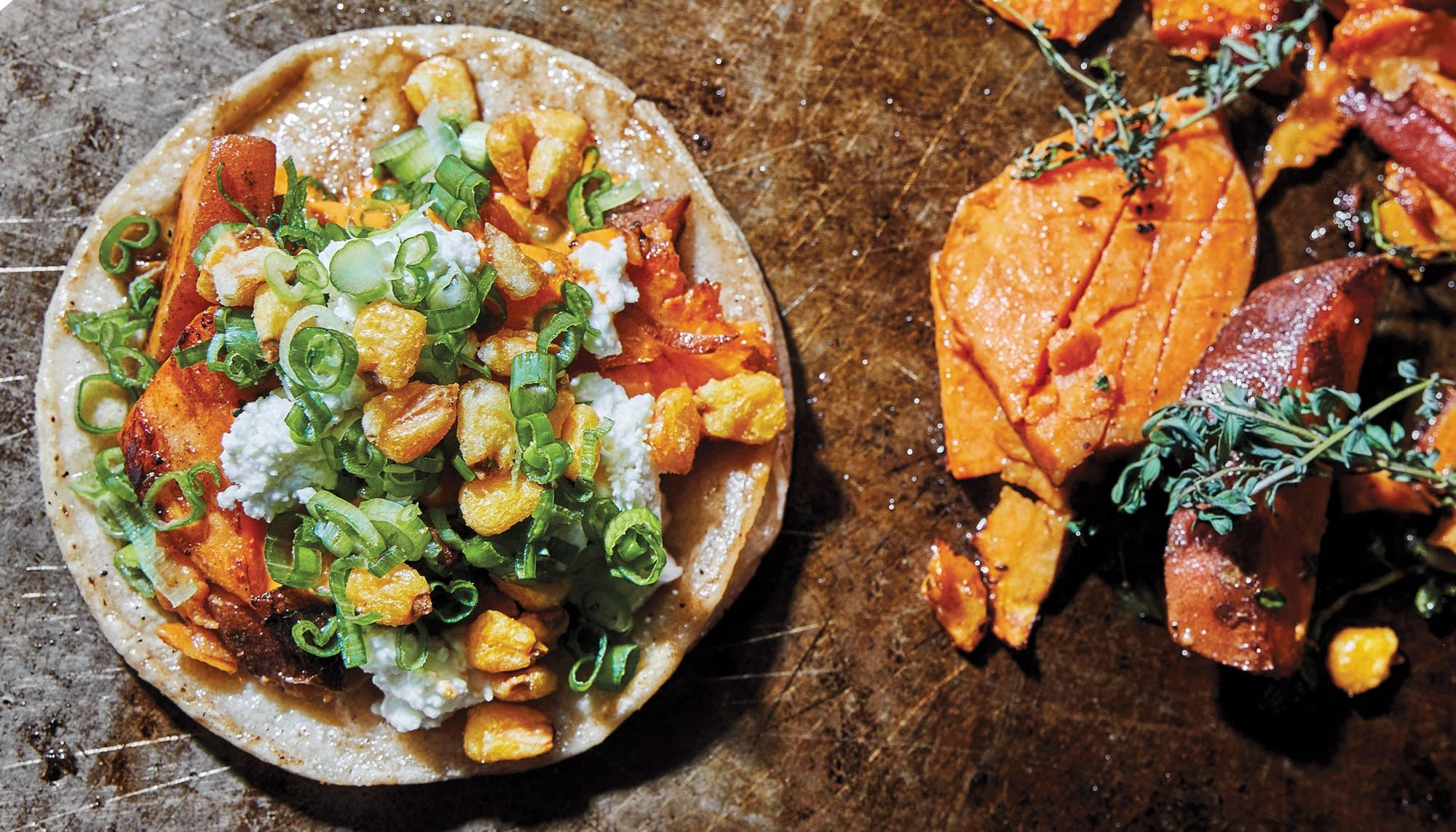 After my mom passed away, my aunt used to make us tons of tacos de papa dorados—basically mashed potatoes inside a tortilla either folded or rolled up like a flauta and fried—and leave them in big bags in the fridge. My friends and I would grab a few, microwave them, smother them in tart, fresh, bright-green tomatillo salsa, and wolf them down while watching episodes of Richard Bey. It’s a casero-style (homemade) snack, sort of like a Hot Pocket. You wouldn’t really see these on a menu anywhere. So when I first got the cart, I figured why not make this taco with a few modifications.

The idea here is comfort—a little sweet from the potatoes, a little tart from the French feta, some crunch from the fried corn, and some heat from the salsa. The salsa isn’t a Mexican thing, it’s a Spanish thing, like a romesco with added spice from the habanero and chiles de árbol. At first we were doing this with Oaxacan melted cheese and braised leeks, but we don’t have the time and space to braise leeks so we add the fresh scallions instead. I like a lot of onion on my tacos. These days you can probably get something like this at other places, but back when we started out, you would never see sweet potato on a taco. Other things cycle in and out seasonally but this is on the menu year-round because it is our best-selling taco.

In a large saucepan or 6-quart stockpot, combine the sweet potatoes and enough cold water to cover. Add salt until it’s as salty as the sea. Set over high heat and bring to a boil, then turn the heat to a gentle simmer. Simmer the potatoes until they’re just cooked—you can stick a knife into one and it comes out clean—about 12 minutes. Drain and set the potatoes aside. When they’re cool enough to handle, slice them into 3/4-inch coins or bite-size pieces and set aside.

To make the almond salsa: While the potatoes are simmering, warm a cast-iron skillet over medium-low heat. When the pan is hot, add the lard. Once the lard is melted, add the chiles de árbol. When the chiles are browned all over and smelling toasty, add the garlic and almonds and cook for 30 seconds. Don’t burn the garlic! Burnt garlic is the worst. When the garlic is slightly golden brown, add the tomatillos, roasted peppers, water, and 1 teaspoon salt to the pan. Cover and cook until the tomatillos are mushy, about 8 minutes—they should split easily and break apart when you push them with a spoon.

Remove the skillet from the heat and, using a slotted spoon, transfer the solid ingredients to a blender and reserve the cooking liquid in the pan. Add the olive oil, red wine vinegar, and habanero to the blender. Cover the blender well and watch out you don’t touch the hot chile seeds during this part. Blend until the salsa is nice and smooth, and then season with salt. You want a little acidity, plus the sweetness from the roasted peppers and heat from the habanero and chiles de árbol. Check the salsa and add some of the leftover cooking liquid to reach your desired consistency. It should be almost as thick as a milk shake.

Put your largest cast-iron skillet over medium-high heat and warm the butter until it’s melted and bubbling but not burning. Add a layer of the potatoes to the pan—you want both sides of each potato slice to get a little browned, but not tough or crispy. Add some of the thyme and cook the potatoes until golden brown, about 15 minutes. Flip them and brown the other side. Set the browned potatoes aside on a plate and cover with foil to keep them warm. Repeat until all the sweet potatoes are browned, using more butter as needed.

On top of each tortilla, add, in this order, three or four slices of potato, 1 tablespoon salsa, 1 tablespoon feta, 1/2 tablespoon corn nuts, and a sprinkle of scallions. Serve immediately.

Reprinted with permission from Guerrilla Tacos: Recipes from the Streets of L.A. by Wesley Avila and Richard Parks III. Published by Ten Speed Press, an imprint of Penguin Random House LLC.