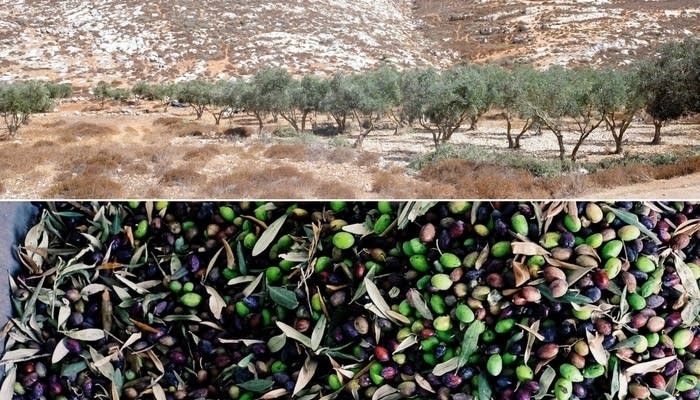 Mid-October to early November is olive harvest season in the West Bank. The olive harvest isn’t just for farmers, it's when people take a break from school and work to spend time with family and friends among olive groves. It’s traditionally a time of serenity, but has become a major point of friction between Israeli settlers and Palestinians. The 2016 harvest marked the tenth year some Palestinians have relied on the Israeli military and volunteer peacekeepers for protection during the olive harvest season. Field reporter Shaina Shealy takes us through a day during the olive harvest near the West Bank city of Nablus.

It's olive harvest season in the West Bank. Farmers climb ladders to reach high branches. They beat the branches with sticks, comb them with plastic hand rakes, and pull on them with bare hands. Olives fall onto canvas tarps like raindrops. Here, the family of Abdel Hafiz Ali harvests around seven sacks of olives every day to make about 22 gallons of olive oil. They say they make nearly half their yearly income from selling olive oil, but that the harvest means more than just income. “You can find trees that are 1,000 years old,” says Ali, looking out over olive grove. “It's a holy thing. Even if you manage a bank, you take time off to harvest olives.” Ali takes me to an old stone house where he slept with his family during the olive harvest when he was a kid. He points behind us to tin shacks that make up an Israeli settlement. So close, they are basically on the olive grove.

In this grove, there are more than a dozen volunteers helping the Ali family pick their olives. They're from the United States, United Kingdom, South Africa. One of them, Yael Vargon, is from Israel. She's studying to be a rabbi. She says she was here picking olives a week earlier when an Israeli settler came running at workers, swinging a baseball bat. Vargon says she stood between the Palestinian family and the settler, and she tried to reason with him. One Jew to another. “I explained to him, ‘Sir, these people are working in their land. What do you want from them? Why are you hassling them? It's their land and their right to be working here. It's forbidden for us as Jews to steal from them, their lands, their fruits, their trees.’ He did come down a little bit. He stopped yelling, and then the police came and took him.”

She says she's here as a peacekeeper to protect Palestinians, and also to break down barriers. “The other thing that happens is that you just get to know the people, because Israelis never meet Palestinians. Maybe when they're soldiers, or if they hire workers to build their houses. Just to meet other people eye-to-eye and have this basic human connection. That's something very important that is happening.”

I leave the farm and get into the car with Zakaria Sadah. His job is to drive around the West Bank videotaping any evidence of settler interference in the Palestinian olive harvest. We drive grove to grove across open swaths of land peppered with olive trees. Settlements top the hilltops. Zakaria points to a hill where Israeli forces watch over Palestinian olive pickers. “You can see the police car there,” he says looking up, then to the grove, “and you can see the farmers work. The army and the police will take from both sides -- at the same time -- to protect the settlers from the Palestinians, and the Palestinians from the settlers.” Israeli military wouldn't say if Palestinians attack settlers during the olive harvest, but they say the troops patrol during the harvest to protect all West Bank residents.

We drive south to a grove with 800 trees. There we find Nabeeh Aldeeb, the chairman of the Palestinian Olive Oil Counsel. Years ago, he says, settlers cut down almost all his trees. “When I come I see all the trees on the ground,” says Aldeeb. “In Arabic, the man doesn’t cry because it’s a very bad thing to cry, because you are not a man if you cry. On that day, I sit down in the street -- and I cry.” Aldeeb is telling me about his olive grove when two Israel soldiers drive toward us. I get nervous. But the soldiers are there to give Aldeeb ice-cold bottles of water on a hot day. No one is in trouble.

At the end of the day, Aldeeb will bring his olives to the nearby mill. “Our olive oil here is very good because we take our fruits to the mills every two days,” Aldeeb says. “In my land, every year I have premium. I don't know how to describe it. The color is green, not yellow. I hope I see you when I go to the mill, and you will taste it.”

Finally, after a long day raking trees under the hot sun in the gaze of soldiers, I make it to the olive oil mill. It's late afternoon. A man helps his grandkids dump sacks of olives into a wash bin. The olives are cleaned, crushed, and pressed into oil so green it looks toxic. I empty my water bottle and hold it under the oil spout, collecting a liter of bright green liquid gold. I spill some onto a tear of warm taboon bread. The olive oil is spicy, grassy, and makes my throat tingle. There's nothing else like it.

Shaina Shealy is a freelance radio journalist based in Jerusalem. Shaina also supplied all of the photos included in this article. The print article and audio story above includes Arabic-to-English translation help from Adam Rasgon and interpreter voiceover by Neil Harris.

Add to your knowledge of olive oil with these related stories from The Splendid Table: