Family affair: for Vivian Howard sweet potatoes are a point of pride

by Shauna Sever
Listen: Family affair: for Vivian Howard sweet potatoes are a point of pride
08:56 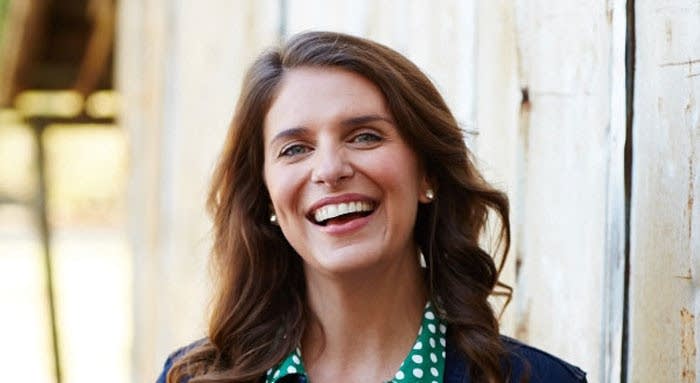 Shauna Sever: First, let's just say that your cookbook Deep Run Roots has a presence. It is an impressive 564 pages. It weighs about four pounds. You look like a movie star on the cover. It's incredible and even more intriguing when you realize that this isn't another cookbook about the entire American South. It's actually a laser focus on this area of eastern North Carolina. So, how many square miles are we talking about?

Vivian Howard: The Coastal Plain is about 100 square miles, which is not big. But when you think about lots of our most vibrant culinary regions in the world like Tuscany or Provence, we're also not talking about a large swath of land when we talk about these places. Eastern North Carolina is a very rural place. It continues to be a rural place.

When so much of our country is changing, eastern North Carolina has not changed that much. As a kid I had very little exposure to other ingredients, the ingredients that don't show up in the book. So, that's really what our diet in eastern North Carolina revolves around: these fruits like blueberries, watermelon, and apples; and vegetables like collards, turnips, sweet potatoes, and sweet corn. That's really what I grew up eating. That's what the people of my region eat, and that's what I've always had to design my menu at my restaurant around. I don't know how else to cook or write about food, except in that context.

SS: You mentioned sweet potatoes. Let's talk about that. It's a very humble ingredient, but there are certainly lots of different kinds. Yams versus sweet potatoes can be a little confusing when you're at the market. So, what kind of sweet potatoes are we talking about?

SS: I was amazed how many sweet potatoes in America come from eastern North Carolina.

VH: Yes, I think it's something like two-thirds of all the sweet potatoes grown in the U.S. are grown within this 100-mile radius. For that reason, sweet potatoes are really a cornerstone of our cuisine.

SS: Certainly a defining ingredient. And going that route of getting specific ingredients in cookbooks can often lead to a lot of food writing clichés comparing food to people, a sort of overly romantic sort of way of writing. You actively avoid that, except in the case of sweet potatoes. Tell us about your Grandma Hill and her candied sweet potatoes.

VH: I so badly did not want my book to be about all the lovely people in my past and comparing them to food – comparing my dad to a turnip or whatever. My grandma is Grandmother Hill and she did everything in moderation. She was not warm and fuzzy. She didn't make really sweet desserts. Her candied yams perfectly represented her pragmatic way of living. When we think of candied yams, generally, we think of torched marshmallows and lots of brown sugar and butter oozing from every crevice. But hers were just roasted sweet potatoes sliced and baked with a little bit of cinnamon and nutmeg, just a little bit of brown sugar and a little butter. As a kid, I remember always wanting more of those things, and, coincidentally, I always wanted more from my grandma. I wanted her to bounce me on her knee, tell me I was beautiful, and love me really tenderly. That was just not her way. So to me she is the sweet potato.

SS: Nothing marshmallow-y about her.

SS: I loved this story about the sweet potato pan being in the home kitchens of the women that you grew up with.

VH: My Grandma Hill, my Grandma Iris, and my mom. We always had a sweet potato pan and sweet potatoes were something that we cooked every day or every other day. My mom just covered that pan in a paper bag and put three or four sweet potatoes on it and roasted them in the oven in their jacket. When they were done, they just stayed in the oven. She'd turn the oven off, but they sat there until we used them. They were just a mainstay, kind of a convenience food.

SS: A real grab-and-go, everyday food, kind of like we grab a protein bar now. You could take a sweet potato.

VH: Right. It was the first Kind bar, I guess. Every day after lunch my grandfather left with a sweet potato in his pocket and it was his afternoon snack.

SS: I love that. So, say we have a batch roasting of the sweet potatoes. What are three ways we could use them for dinner tonight?

VH: I love to make soup a lot. When I have these roasted sweet potatoes, I'll just peel the jacket off and cut it into chunks, then throw them in the soup. It thickens it up instead of adding a roux or cream. And it adds a pleasant background sweetness. With my kids, I am a vegetable hider. I never thought I'd be that person, but I am. I make things like turkey burgers or meatloaf, and I'll fold some of that sweet potato into it. It makes it moist and it also adds a nice, pleasant flavor. Then, I love to split that roasted sweet potato in half and I'll dot a little bit of red miso and a little bit of butter, little sprinkle of some sunflower seeds on there with some flaky sea salt. Heat that gently in the oven and that's a meal in itself. And it's nice because you can customize it for every member of your family. My husband, Ben, loves to sauté turnip greens, because they've got a little bit of bitterness, and a little bit of sausage. He’ll put that on top of a roasted sweet potato. They're just incredibly versatile and if you already have them roasted, they're incredibly convenient.

SS: Wow, those are some great ideas. Let's talk about a special occasion dinner: Thanksgiving. I imagine the sweet potatoes on your Thanksgiving table are pretty impressive. What are you going to be doing with your sweet potatoes this year?

VH: Every year, we make my Grandma Hill's candied yams, just because it's like having her at Thanksgiving. But I also make a tostone. I'll slice them, boil them just till they're barely tender, smash them, pan-fry them, and they get really nice and crunchy around the edges. Then I'll make a syrup with Chinese five-spice and bacon, and drizzle that over the top of the crispy sweet potatoes. That’s been a huge crowd-pleaser in years past, so I'll probably make that this year. It's also great for breakfast. If you're having a Thanksgiving breakfast, it's very satisfying.