Other People's Food and the Greensboro Four

by Melissa Clark
Listen: Other People's Food and the Greensboro Four
09:13 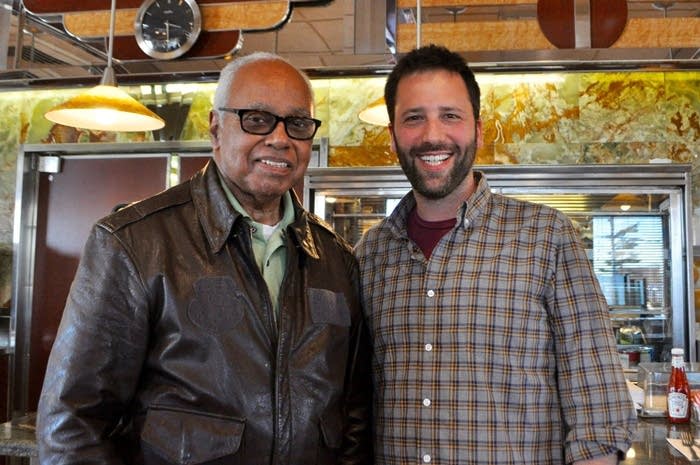 The Sporkful's Dan Pashman has started Other People's Food, a podcast that uses the universality of food to find common ground amid racial and cultural differences. On a recent episode, he spoke with the Greensboro Four's Joseph McNeil, who successfully broke the color barrier at a North Carolina Woolworth's in 1960. Dan shares this conversation with Splendid Table contributor Melissa Clark.

Melissa Clark:  You've been working on a podcast called Other People's Food, where you talk about the relationship between race and food. I'd love you to tell us a little bit about that.

Dan Pashman:  Other People's Food is a series we embarked on on the Sporkful podcast, and it was inspired by a lot of recent events and some of the recent violence. Race and culture certainly have been big issues as of late, but it seems like whenever anyone tries to have a conversation about it, it quickly devolves into shouting and one side against another side. We thought that if we begin the conversation with food, something so universal, maybe we could get it to a different place, where it wasn't all shouting.

MC: Recently you spoke to Joseph McNeil. Tell us who he is and why he's important.

DP:  Joseph McNeil is a great civil rights leader. He's one of the original members of the Greensboro Four, who were a group of four African-American college students who, back in 1960 in Greensboro, North Carolina, staged a sit-in at a segregated Woolworth's lunch counter. Their protest sparked a bunch of other protests at restaurants and lunch counters across the south and across the U.S. that helped integrate a lot of restaurants in America. He had a huge impact, and I was very fortunate to get to sit down with him. We went out to lunch at a diner on Long Island. We started off with him telling me a little bit about some of the events in his life that led up to his protest.

Joseph McNeil:  It came to a head in a Richmond bus station. I ordered a hamburger and was told that I had to go to the rear of the bus station. That ticked me off. I realized how deep this thing was and that it was going to stay like this unless we changed it. So I went back to the dormitory that evening, confronted my friends and said, "Listen, we've talked and talked and talked. When are we going to act?"

DP:  It's such a simple thing, sitting down to eat. You and I both just walked into this diner and we sat down together to eat.

JM:  Sixty years ago, if we tried this maneuver, we'd be confronted.

DP:  Which isn't that long ago.

JM:  In the scheme of things, in lifespans, you're right on.

DP:  It's so hard for me to wrap my brain around the idea that what you and I are doing right now would have been a cause for controversy.

JM:  Segregation was pervasive. It was everywhere. Even in a McDonald's, you were required to go to the rear of a McDonald's and place your order. We all know the absurdity of colored water, colored access to the beach, no access to hotels if you're traveling and you're tired.

DP:  You walk into the Woolworth's on that day, February 1, 1960, and you go and sit down on this stool at the counter where no African-American, as far as we know, had ever sat, and you take that seat. What was going through your head in that moment when you first sat down?

JM:  Lots of uncertainty. How was the crowd of people who gathered around us going to react? How was the store manager going to react? We faced the possibility of arrest, and we were aware of people who defied segregation. We were aware of what happened to Emmett Till. All these things were operating in the background, because it could have happened to us.

DP:  I know there was one moment, several hours into the first day sitting there, when a cop came in and he started brandishing his club.

JM:  Threatening. Menacing. Other patrons started to gather around saying, "You see those four colored boys over there?" And the word started to spread that four colored boys were sitting down at a Woolworth's store, saying they're not going to leave until they're served. There was an elderly white woman who was watching this scene from the time we sat down, and she got up and started walking towards us. Frank McCain [Ed. note: one of the other Greensboro Four] said, "McNeil, here comes trouble."

MC:  What happened next?

DP:  The protesters did gain more friends, black and white, but they also gained a lot of enemies. Very quickly, people descended on this lunch counter within a couple of days. A lot of white townspeople who opposed the protesters were getting there earlier to take all the stools at the lunch counter, so the African-American students and the other protesters could not sit there. They could not wage their protest.

This went on for days, with a mixture of protesters and counter-protesters jockeying for the stools. If you see photos of the time, it was jam-packed in there. People who couldn't get stools were standing shoulder-to-shoulder, and it was just so tense, almost as if these people were all waiting for someone to throw a punch.

One of the stories that came out of all of this that I found especially moving was, there was a group of white women at an all-girls college down the road who were inspired by the protesters. They came down to the lunch counter, and when they walked up to the counter, several of the white men who were sitting on stools who were opposed to the African-American protesters gave up their seats. They assumed, "Well, they must be on our side and we're going to be very gentlemanly and give up our seats." So the women sit down in the seats, the waitress comes over and says, "Can I take your order?" The women say, "We're not ordering yet, we think there were some African-American customers who were here before us."

MC:  Wow, that was brave back then.

DP:  Very brave. At the end of the day, they were afraid they might have gotten in too deep, because this place is packed shoulder-to-shoulder. They started to wonder, "How are we going to get out of here safely?" They knew that they had made some enemies in that room with that action. All of the sudden, at closing time, a group of the African-American protesters surrounded them, locked arms, and safely escorted them out of the restaurant to the street, where they had a cab waiting for them. They put them in the cab and sent them back to their all-girls school campus.

MC:  That's an amazing story. How long did it take Woolworth's to finally integrate their lunch counters?

DP:  That initial protest was in February. The lunch counter was integrated in July. It took months of on-and-off protests and, frankly, a lot of bad publicity, for the lunch counter to finally be integrated, but it led to a wave of integrations at restaurants and lunch counters across the country.

Melissa Clark is a food writer, author, and host of our new podcast Weeknight Kitchen with Melissa Clark. She is a food columnist for The New York Times, and has written more than 30 cookbooks including Dinner in an Instant, Cook This Now, and In the Kitchen with a Good Appetite.
Anzac Caramel  Chocolate Slices
Supe Me Domate
Lisa Donovan's Pie Dough
Kunafah bil-Jebn (Lebanese Sweet Cheese "Pie")