Here's a substitute for lye when making pretzels at home

by David Leite
Listen: Here's a substitute for lye when making pretzels at home
05:24 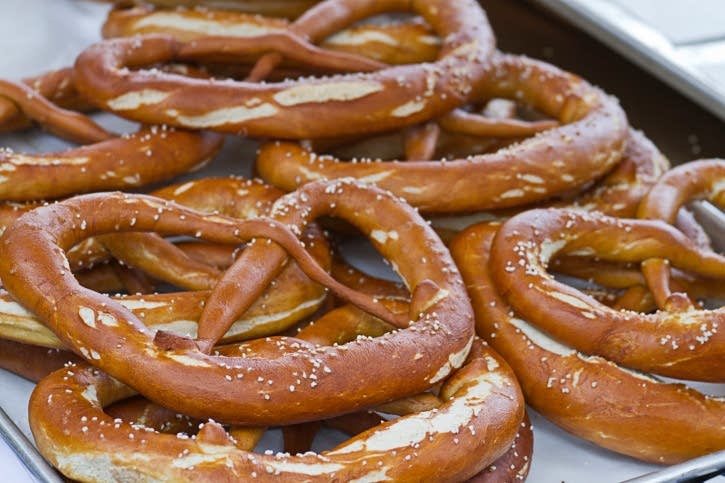 Andrea Slonecker, author of Pretzel Making at Home, says when it comes to the invention of the pretzel, "we don't know really what's true." She shares the pretzel's origin story and how to make the iconic snack at home.

The invention of the pretzel

David Leite: Pretzels are so ubiquitous here in America, but of course they have a very rich and foreign history. How did it all begin? How did it get here to America?

Andrea Slonecker: It's believed that they were invented in the year 610 by monks along the Mediterranean, somewhere where Italy and France now meet. It's believed that they were first invented as little rewards for children for learning their prayers. A monk tore off a piece of dough, shaped it into this twist that was meant to represent a child's arms crossed over his chest in prayer (which is how people would have prayed back then), and gave it to the children if they learned the scripture.

There is another plausible theory, though -- there's a lot of folklore and a lot of legends. We don't know really what's true, but another theory is that pretzels were sustenance for monks during the Lenten fast. The three holes in the pretzel were meant to represent the holy trinity.

Pretzels came to America in the 19th century with the Dutch immigrants who settled in Pennsylvania. Pennsylvanians eat 12 times as many pretzels as the rest of the country. I did go there to research the book of course for that very reason. They have a lot of pretzel bakeries in Pennsylvania. The Italian immigrants in Philadelphia adopted this curious bread that they had never seen. They started baking them in Philadelphia and selling them on street corners.

Hard pretzels were invented in America in the Pennsylvania Dutch country when a young apprentice baker forgot a batch of pretzels in the oven overnight. The ovens went cold, but the pretzels remained in there and hardened overnight. The baker decided to try selling them the next day. Thus, America’s favorite snack food was invented.

DL: How did this interest in home pretzel making start?

AS: About 5 years ago, I began seeing pretzels on menus at various restaurants around the country. They were in artisan bakeries being used as the sandwich bread. I really was curious about why I started seeing it everywhere. I started researching pretzels. That led me to start tinkering in my kitchen with baking them myself.

What really makes it a pretzel I think is the fact that it's dipped in an alkaline solution before baking. That's what gives it that really amazing crust, that characteristic flavor, that leathery texture and that dark color that we expect with a pretzel.

DL: Traditionally in Germany they use lye, which is an alkaline solution that can be caustic. But you found a very ingenious way of substituting that.

AS: I was really lucky at the time that I started researching pretzels. The amazing food scientist Harold McGee had just come out with an article in The New York Times about how to basically create a substance that is similar to lye in your home kitchen, but not quite as caustic and much more readily available. That is by taking baking soda, spreading it out on a baking pan and putting it into the oven at about 250-300 degrees Fahrenheit for about an hour. That changes the chemical properties in the baking soda to make it behave more similarly to lye. [Ed. note: More on Slonecker's technique here.]

DL: After the baking soda comes out of the oven and it cools, what do you do with it to make the pretzels?

AS: You begin with the dough. You shape it into that iconic shape, then you dip it in an alkaline solution (the baked baking soda and water). It's a small percentage of baking soda to water. You dip the pretzels into the solution, put them on a baking sheet, pop them in the oven and then you have freshly made pretzels.

In Germany they come in knots, sticks, rolls, twists and all sorts of different shapes that are used for making sandwiches or just for eating with butter at breakfast. Even in America I've seen croissants dipped in a lye solution and baked or pretzel pigs in a blanket. You can come up with all sorts of different pretzelized creations.

David Leite is the publisher of the website Leite's Culinaria, which has won two James Beard awards. He is the author Notes on a Banana: A Memoir of Food, Love, and Manic Depression, as well as The New Portuguese Table: Exciting Flavors from Europe's Western Coast, which won the 2010 IACP First Book/Julia Child Award. Leite also won a 2008 James Beard award for Newspaper Feature Writing Without Recipes, a 2006 Bert Green Award for Food Journalism, and Association of Food Journalists awards in 2006 and 2007.