You cook with capers, but do you know what they really are?

by Sally Swift
Listen: You cook with capers, but do you know what they really are?
06:32 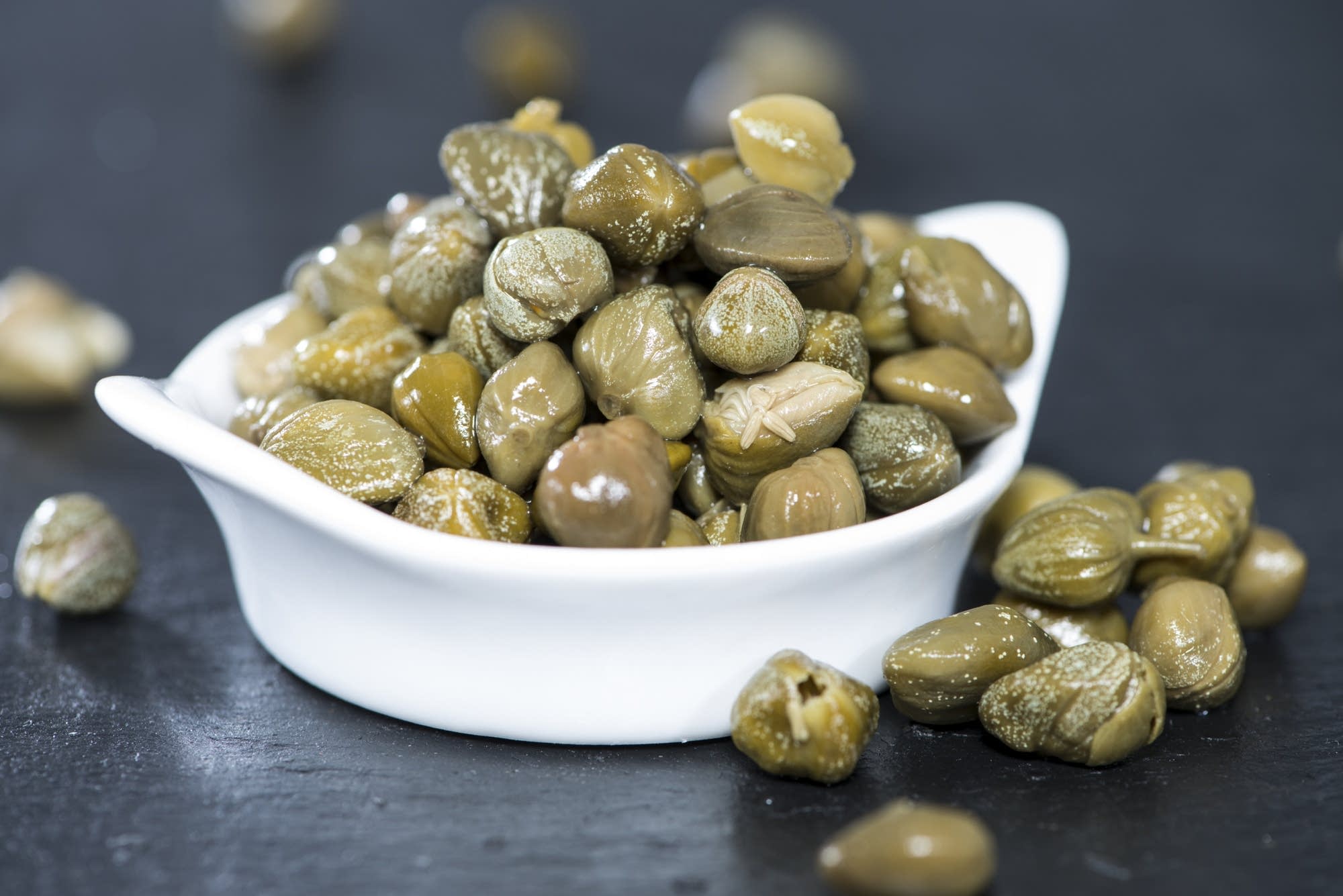 There are a handful of ingredients that can really add life to a dish: lemon, vinegar, anchovies, olives -- and capers. David Rosengarten visited Pantelleria, Italy, or what he calls "caper heaven." He explains the difference between caper buds and berries and debunks a caper food myth that just won't go away.

Sally Swift: What are capers?

David Rosengarten: There’s a plant called capparis spinosa. When the plant creates a bud -- this starts every year in the spring -- this bud is going to be a flower. However, if you pick the bud before it becomes a flower, that’s a caper. In fact, properly we should call it a caper bud; the whole plant is a caper plant and it has various parts, but what we all call a caper is a caper bud.

SS: What about those bigger things that we see called caper berries?

DR: If you leave the bud on the plant, then a couple of weeks later it opens up and has a flower -- a beautiful purple and white flower. If you let the flower fall off, it's replaced a little bit later in the season by a fruit. That fruit is called the caper berry.

It looks like an olive; it's oblong. It's much bigger than a caper bud, and it has a similar taste and it's treated a similar way. It is not quite as intense-tasting as the caper bud, but it has a very similar flavor and it’s really quite delicious.

In Greece, they also like to use the leaves of the caper plant.

SS: Where are the best capers grown?

DR: There are capers grown all over the Mediterranean. Some are grown in Asia and in Australia. Most people in the world of capers will tell you the very best capers come from a small island called Pantelleria that is off the coast of Sicily, Italy. It's really part of Sicily, but geographically it's between Sicily and Africa. It's actually a little closer to Tunisia than it is to the main part of Sicily. But that's it. That's caper heaven.

Happily, they're widely available. If you go to a gourmet grocery store, you'll find capers from Pantelleria.

SS: Are they farmed there or are they wild?

DR: You can cultivate the plant. I saw a caper farm where everything had been planted, but I also saw the caper bush growing wild all over the island.

SS: Now the big question: Here we can find capers cured in those little bottles with vinegar and also salted. What's the difference?

DR: If you tasted an olive without any curing, it's horrible; it's bitter. It's the same for the caper: There needs to be some kind of cure before you can really enjoy it, and that involves salt.

DR: Definitely the dry way. In Pantelleria, all the good places make them dried just with the salt. It's trickier and more expensive. I went into some storage rooms where they had big bushels of capers sitting there with the salt. They have to go in there every day and mix them up because they have to make sure the salt is evenly distributed.

But if you put them in a big barrel with liquid, you don't have to worry about that. It's easier and faster, but I think they end up a little more washed out.

I think the intensity of the salt-cured capers is much better.

SS: What about sizes? Should we be going for the smaller ones or the bigger ones?

DR: On the Internet, almost everybody says, "Get the smaller ones. They are better." But that is one of those food myths that just won't go away. The only reason that you hear it is because that's what everybody has always said, and nobody has really taken the trouble to really research it.

When I was in Pantelleria I kept asking, "What size do I want?" Everybody I spoke to -- from producers and chefs to local food writers -- all said the big ones are much more flavorful.

They usually come in three sizes: small, medium and large. The downside with the larger ones is these are closer to springing open and becoming flowers. They are not quite as tight in texture, they're not quite as firm, they have a flower inside them waiting to break out. However, they have developed to the most gorgeous flavor.

SS: I love the idea of a flower being ready to burst out of those bigger ones. It's very romantic.

How do they use capers on that island?

DR: Ubiquitously. They are in almost every dish you are served. Their caponata definitely has a lot of capers in it, they are in sauces and sprinkled in salads.

They do make something quite special there. On the the west coast of the main island of Sicily, there is a place called Trapani. In Trapani they make a local form of pesto. They call it pesto, but it doesn't look like our pesto. Our pesto is very basily and green, but theirs is quite red because they make it with tomatoes. They also pound almonds into it and they add, of course, capers to it.