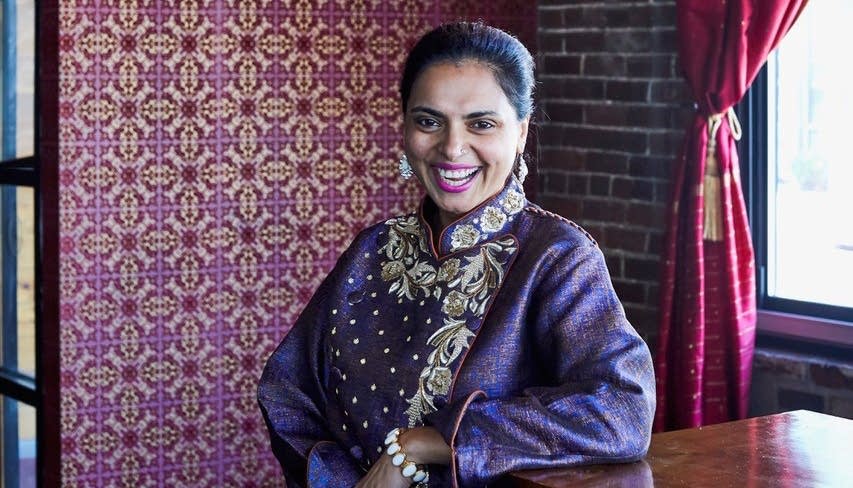 For years, the Indian-born chef Maneet Chauhan ran the kitchen of an absolutely delicious restaurant in New York called Vermilion. It eventually closed, I missed her food, and for years I watched her as a judge on the show Chopped, and I figured she might have left restaurants for a life in media. And then I learned that she’d actually moved to Nashville, and built a whole collection of restaurants there, marrying flavors from India and inspiration from the South and around the world. And I’d heard that she does an amazing Thanksgiving menu at her restaurant, Chauhan Ale and Masala House. We caught up in the studio, and I started by asking her how she got into cooking in the first place.

Maneet Chauhan is the chef-owner of Chauhan Ale and Masala House, Tansuo, and Mockingbird in Nashville. She shared her recipe for Naanzanella, a bread salad made with fried naan, and Lamb Keema Papdi Nachos from the book, A Place at the Table.

Francis Lam: How did you get into cooking?

Maneet Chauhan: Simple. I loved eating – as simple as that. I grew up in this really small town in India called Ranchi, and there were people from all over India in the community that we lived. In India each and every state has a very unique cuisine of its own, so I would finish dinner at home, and then go to my neighbors’ houses and tell them that my parents hadn’t fed me, so can I please eat with you. That was pretty much how my eternal love affair with food started. I would just be that obnoxious kid, sit in the kitchens with these aunties cooking, and asking them why are you heating the oil? Why are you adding mustard seeds?

FL: It’s one thing to love eating, but did you know that you wanted to be a chef? Did you see a career path to being a chef?

MC: It was really interesting because my older sister, when she went to college, I would take food for her. Soon I realized that I was the most popular kid on campus, and I didn’t even go to school there. I think that was my aha moment, because I realized that, hey, this is something I love doing, and people love me for it, so why don’t I think of this as a career? And that was a challenge, because in India at that time the acceptable careers were to be a doctor or an engineer, and if you’re really thinking outside the box, maybe an accountant. But here I want to be a chef. At that time it wasn’t even acceptable for men to be chefs. It wasn’t considered an acceptable career. But my parents were very supportive. The only thing they ever told me was do whatever you want. Just make sure that you’re the best at it, and that’s the mantra that I have kept very close to my heart.

FL: And then, to pursue that career, you eventually came to the United States. You went to culinary school.

MC: Yes. I did my undergrad in India in hotel administration, which was amazing, and it helps me a lot right now being a restauranteur. Then in my final year I asked my chef instructor which would be the best culinary school to go to. And without even batting an eyelid, he said the Culinary Institute of America. And that was it. I set my eyes on it and applied.

FL: That’s my alma mater too.

FL: Do you remember your first Thanksgiving here? What was that like?

MC: I so vividly remember. I usually have a very bad memory, but there are some memories which you associate with a very sensory experience. I still remember the first Thanksgiving. There were a few of us who didn’t go home because commuting to India would’ve been a long way off. So, it was just very fascinating for me because that was the first holiday as such that I celebrated in America. We went to this faculty member’s house. There were around ten of       us students and then their entire family. It was cacophony and I absolutely loved it and adored it, because to me, to date, that’s what I associate Thanksgiving with: it’s togetherness, it’s family, it’s a lot of food, and it’s just – I understand what tryptophan means.

FL: And kindness. I have to ask you, because they brought all these stranded culinary students over, did they make you cook?

MC: No, not at all. It was a table of bounty, and to me it was such generosity that it was overwhelming. I think about it and I get very emotional. It was one of those moments in life when you realize that people are essentially really good people.

FL: Why did you decide to open the restaurant on Thanksgiving? I ask because, as every food magazine editor knows, everyone says they want something cool and unusual for Thanksgiving, and then everyone gets really upset if it’s not exactly the way that their momma made it. So, at your restaurant, Chauhan Ale & Masala House, where you do Indian-inspired, Indian-ish food, does an Indian-ish Thanksgiving fly with your customers?

MC: Oh, boy, does it fly. It’s like the busiest day. That’s the most number of covers that we do the entire year. And I think one of the reasons why we started that was because Nashville has a lot of professionals, it has a lot of colleges. And even though Thanksgiving and cooking go hand in hand, there are some people who just want to spend time with their family and don’t want to get into cooking. Then there are some people who don’t have the opportunity to go and meet up with family. The reason why we started it the first years was that even if it’s just a handful of people who come, that’s fine. At least let’s make their Thanksgiving memorable. And then we didn’t realize how out of control it would get.

FL: How does it feel to work on Thanksgiving?

FL: It’s just whether you clocked it or not. Either way, you’re doing something.

FL: What are some things on the menu for your Thanksgiving menu that you really love?

MC: Thanksgiving, to me, is always about bounty. It’s about excess. It’s about, I’m a full right now – great. Now I’m going to start eating dinner. That is pretty much what we’ve tried to embody in our Thanksgiving feast. In Nashville there is a concept which is called ‘meat and three’, so you go to these restaurants, there is a meat of the day, and then you choose three sides. Our initial plan was that we’ll do Chauhan’s Ode to Nashville Thanksgiving Meat and Three. And then when we started making the feast, we were like oh it needs this, oh it needs this, and it ended up being Thanksgiving meat and nine.

Everybody gets this big platter, which has turkey tikka masala. We take these pieces of turkey and we brine, marinated it in Indian spices, and cook it in a tandoor. But there’s also a vegetarian version, which is the paneer version of the same thing. And then the sides include vegetable pulao biryani stuffing, and then there is a green bean coconut puri, which is a coconut in a green bean sauté. Then we do a corn chana dal, which is corn and a lentil soup. There’s a cranberry five-spice chutney. We do a chestnut nan, papadum pickles, sweet potato raita. Then a pumpkin spice bread pudding, which is topped with some marshmallows, which have been s’mored.

MC: You’re making a trip to Nashville for Thanksgiving, aren’t you. I’m selling it, aren’t I?

MC: This was fun. Happy Thanksgiving.

More about A Place at the Table: The book is produced in collaboration with the Vilcek Foundation, which is dedicated to raising awareness of immigrant contributions in America and fostering appreciation of the arts and sciences. The publication of the book follows the Vilcek Foundation's prestigious 2019 chef awards this spring, which only happen every 5 years. The winner of the Vilcek Prize in Culinary Arts this year was just announced and it was Marcus Samuelsson.

Francis Lam is the host of The Splendid Table. He is the former Eat columnist for The New York Times Magazine and is Editor-at-Large at Clarkson Potter. He graduated first in his class at the Culinary Institute of America and has written for numerous publications. Lam lives with his family in New York City.
Raw Corn & Avocado Salad
Cucumber Tahini Gazpacho with Crispy Spiced Chickpeas
Summer Squash Escabéche with Mushrooms, Arugula, and Steak
Salmon Cakes with Chimichurri