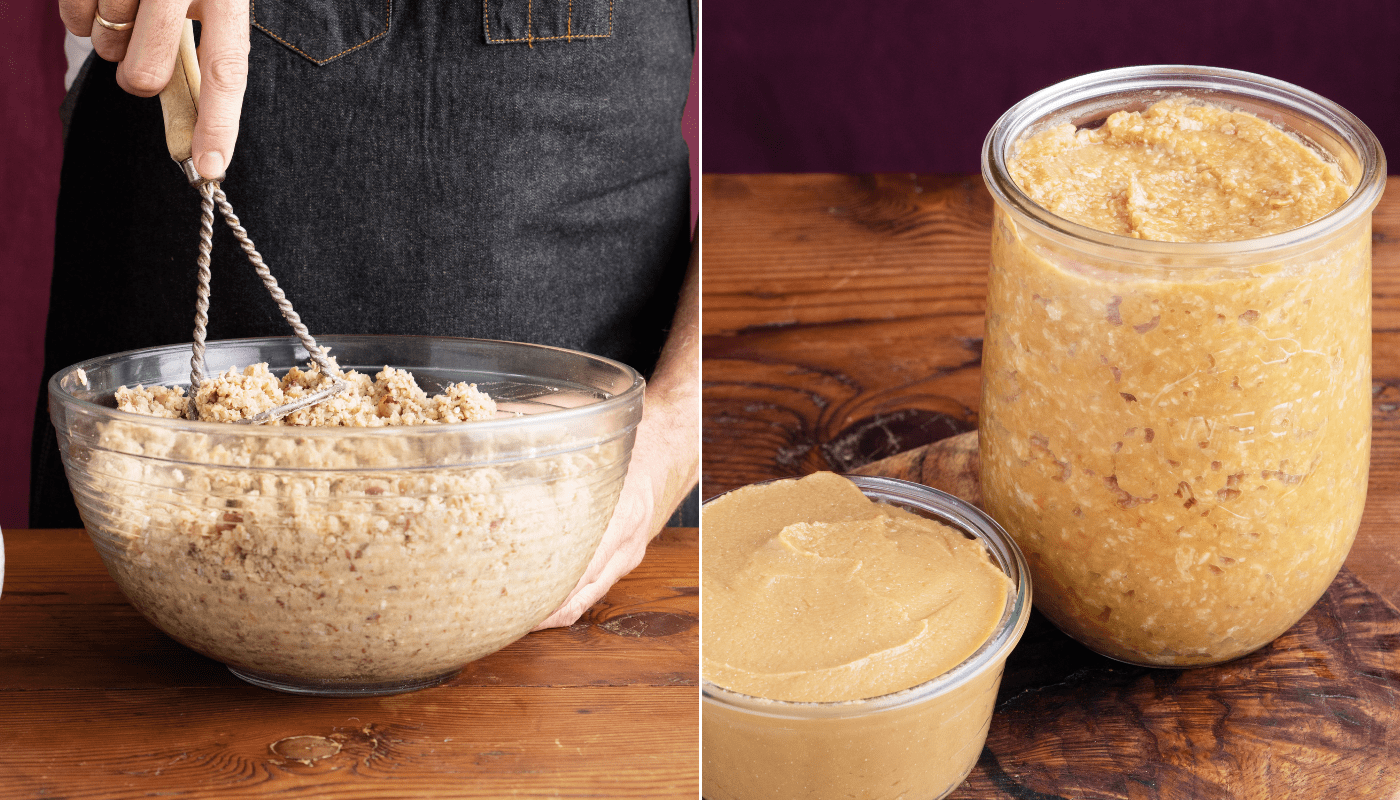 Here at The Splendid Table we enjoy taking a deeper look at the ingredients that change the way we cook. One ingredient that has been fascinating to us recently is miso, the fermented bean paste that packs a major umami punch. A lot of us think of miso as an ingredient that makes a soup base, but it’s so much more interesting and complex than that. Did you know you could pickle with it?! Kristen Shockey teaches the art of fermentation and, along with her husband, Christopher, has co-authored a number of books on the subject including Miso, Tempeh, Natto and Other Tasty Ferments. Kirsten talked with our Managing Producer Sally Swift about the huge flavor impact miso can have on a variety of dishes; she also shared these insightful step-by-step instructions for making miso at home.

Sally Swift:  Let’s talk miso. Tell us what it is and how it’s made.

Kirsten Shockey: Miso is ancient. It is a fermented bean paste, and it comes via China 2,500 years ago. I call it a top-shelf ferment because it’s fermented with aspergillus oryzae, which is koji, as the first step. You’re growing a fungus on usually a grain – every once in a while also on the beans, but traditionally on rice or barley. That fungus starts to lay down enzymes, and those enzymes are the super power. You can think of them as little scissors just snipping away at the larger molecules. They’re making your fats into fatty acids, they’re making your protein in to amino acids, and they’re taking the starch that the microbes couldn’t get at naturally and making it into simple sugar, which then is available for lactobacillus and yeast to start moving in and fermenting and transforming.

SS: And the magic happens.

KS: What we know of as miso particularly today is Japan’s variation on this process.

SS: I was surprised to hear that it’s related to hoisin sauce.

KS: Way back, hoisin was one of the first foods produced using fermented soybeans. Hoisin was originally fermented and it often had things like eggplant or pumpkins or different vegetables in it as well. So, it was probably a very different product than what we see in the supermarket now.

SS: We can buy miso in the store. But we can also make it, and it’s fairly simple to make.

KS: Correct. It’s super simple. In fact, you can just buy the koji premade and cook up a pot of beans – they can be soybeans, your favorite heirloom bean or just simple pinto beans. You mix it with salt and that koji, then you smoosh it down into a jar and let the magic happen. It happens without you. The microbes are on it.

SS: That is pretty simple. It’s a dump-and-mix essentially.

KS: Pretty much. Then wait – which is the hard part.

SS: I would love for you to give us a little bit of a primer. Miso comes in all different colors. There’s red, there’s yellow, there’s white. You’ve read that the white is the gateway miso. Is that the place we should be starting?

KS: White is sweet, and Americans seem to love sweet, so it is a good gateway for that. Let’s talk about the spectrum of colors. Like you said, there’s white, and then there’s the really dark misos on the other end – it’s like a hatcho miso and it’s a mahogany color.

How those are made is, the white miso is more of this koji rice, less soybean, less salt, and less time. So, it’s still sweeter. All those sugars haven’t been fermented away. On the other end of the spectrum you have less koji, more salt and more time. These misos get darker with time; it’s actually the Maillard reaction, so the same thing that happens when you’re browning onions is also browning that miso through time.

SS: What a great analogy. That makes sense. I definitely buy my miso, I don’t make it, and it stays in the back of my refrigerator or a really long time. Is there too much time? Is it possible to have your miso go bad?

KS: Not at all. You’re just adding to your aging process. I talked to an American miso maker, South River Miso in Massachusetts. He’s been making miso for over 30 years, and he said he has a miso museum; he’s got one bit left of a 30-year-old white miso. You read everywhere, don’t save white miso; white miso is supposed to be young. Well it is, but it doesn’t go bad. He said it’s actually like a bullion cube now.

SS: When you are looking at your spectrum of miso from the lighter to the darker, what should you be thinking about when you make that choice as to which one you go for? Obviously, the white is sweeter, but then the yellow and this kind of a red color one – do they do that with adzuki beans? What are we thinking about when we’re looking at the color spectrum? How do we choose?

KS: On the red, you asked if they’re adzuki beans. No, they’re still soybeans and rice, and it’s a different member, if you will, of that aspergillus oryzae or koji family. So, it changes that color and gives that sort of classic flavor.

But to answer your other question, what I look at when I’m trying to think of how I want to use something, is what am I looking for in the dish. Like a yellow miso or chickpea miso, and even a red miso, those are kind of middle of the road. They’re going to give you really nice flavors, but they’re not going to be crazy strong. I use those for marinating things. You can marinate veggies in them and kind of pickle your veggies.

SS: Wait a minute. What do you mean you can pickle in miso? I’ve never heard this.

KS: Remember I talked about enzymes? That’s the beauty of miso, especially if you’re getting the unpasteurized miso, you’re getting the power of those enzymes. They’re still in there waiting to do something. You can take veggies or tofu and wrap them in miso. With vegetables, I put my slices of veggies down in a little container and then cover it up slightly. In three or four hours you’re going to have this salty, rich flavored cucumber or daikon, and you suddenly have this wonderful thing to add to your cheese board or whatever.

SS: You’re kidding me. Wait a minute. Can I just ask one more question?

SS: Do you then scrape off that miso?

SS: So, you’ve layered this vegetable in between – I think of Play Dough almost when I think of miso – and you pull the vegetable out that’s now pickled, and then do you get to reuse that miso?

KS: Right. You’re going to take your fingers and scrape most of it back into that little container. You can either serve the veggie with the chunks on there or just rinse it off completely. And then, yes, you can use that three or four times. As those flavors are infusing your vegetables, what happens is that it gets a little weaker as the salt is being moved into the veggies. When we’re done with a miso pickling run, we will use that either for soup or I’ll use it to marinate meat or something that I’m not going to scrape it off and reuse it again – and then put that on the barbecue. And again, you’re harvesting those enzymes, and they’re breaking down and adding flavor and texture to your food.

SS: What else would you do with this midrange miso? Miso soup is obviously the place that most people start, but we want to go beyond the broth, right?

KS: I think of it as a secret sauce. It can add this little pow to anything that you would normally make. Let’s say you like refried beans and you like making burritos; you can throw a little miso in there. You can throw a chickpea miso in a hummus dip and you get of chickpea squared. I use white miso for salad dressings a lot; I’ll use a chickpea miso for that. I have put the really dark miso into dolce de leche to get this real nice, salty umamai.

SS: What? You would take the dark miso and mix it with the sweet. I guess that’s like cocoa, right, with those chocolate notes to it?

KS: You get a little of that. It reminds me of a salted caramel, something rich and smooth.

KS: If you really aren’t the type of person that wants to make all these things at home, you can buy the dolce de leche and you can buy the miso and then just put them together.

SS: I love that. I think that’s a great idea.