Whenever it’s served, a scalloped potato gratin is usually the best thing on the table. With tender potatoes suffused with cream and herbs, and a burnished lid of melted, buttery cheese, there are few things more delicious. That’s why I think you should make potato gratin the centerpiece of your meal, rather than as a side dish to a juicy steak or a roast chicken. Or, if you really want both meat and potatoes, why not mix things up and make the steak the side dish to the gratin?

2. Melt the 2 tablespoons butter in a 12-inch oven-safe skillet over medium heat. Add the leeks, 1/4 teaspoon each salt and pepper, and the sage leaves. Cook, stirring, until the leeks are tender and golden, 7 to 10 minutes. Remove the leeks from the skillet and set them aside.

3. Using a mandoline or a sharp knife, slice the potatoes into 1/8-inch-thick rounds. In a large bowl, toss the potatoes with the remaining 3/4 teaspoon salt and 1/2 teaspoon pepper.

4. Add the crème fraîche, milk, garlic, and bay leaves to the skillet, scraping up the browned bits of leeks. Simmer gently for 5 minutes; then remove the skillet from the heat and discard the bay leaves.

5. In a large heatproof bowl, lightly beat together the eggs and nutmeg. Slowly pour the hot crème fraîche mixture into the eggs, whisking constantly while pouring, and set the mixture aside.

7. Cover the skillet with aluminum foil and transfer it to the oven. Bake for 40 minutes; then uncover it and bake until the cheese is bubbling and golden, another 20 to 25 minutes. Let the gratin cool slightly before serving. 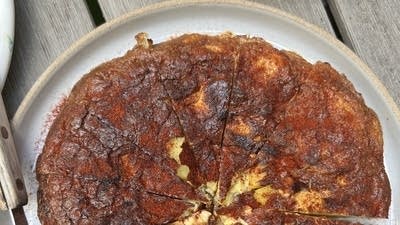