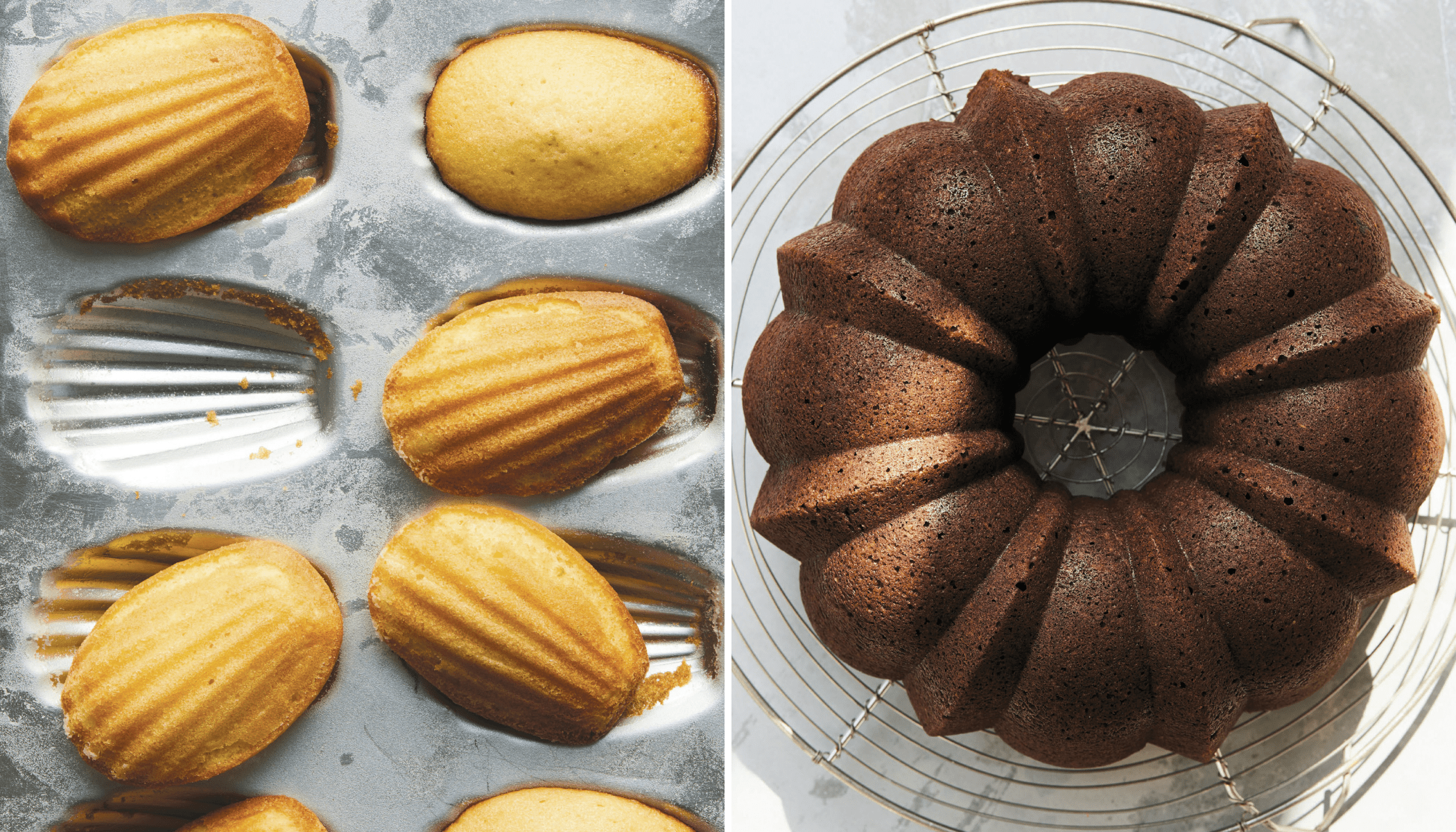 Ahh, cake! That sweet four-lettered word that conjures images of comfort and celebration. But for non-bakers, the thought of making a cake usually ends up with a trip to the bakery or supermarket to pick up a store-bought version. That’s where Odette Williams comes in. She has written a book called Simple Cake. Its premise is that cake making doesn’t have to be a laborious, complicated and overly fussy thing – in fact, it can be quite simple. Contributor Melissa Clark recently met up with Odette Williams talk cake. Odette kindly shared her recipes for Versatile Coconut Cake and Madeleines.

Melissa Clark: What is it about baking a cake that is so special, say compared to cookies; why is the cake the thing you want to make for a celebration?

Odette Williams: I think because cakes were associated with birthdays, they took on this celebratory feel to them, compared to a cookie, which is a little more “everyday.” It's interesting and I think that’s what I honed in on for this book. Here’s the celebratory food that you can have every day. They’re more modest in recipe than the tottering towers that you see – and I can totally appreciate. The kind of cakes I want to eat are the more everyday snackable cakes that you can crank out within an hour, you probably have all the ingredients in your pantry, and you don’t need to be an expert baker to pull them off.

MC: I get that. Making it accessible. That’s one of the things I love, you don’t need an occasion for cake. I feel strongly about it, and I actually wrote an article about snacking cakes and the idea that you can have a cake anytime – you don’t have to eat the whole thing – but having a slice of cake shouldn’t be just on your birthday.

OW: It's important to give yourself permission, even if you’re not a baker, to say, you know I’m going to make this lovely lemon yogurt cake. It’s going to sit there and it will be gobbled up within the first 24 hours. What I also tried to do with the cakes that I’ve curated is to make sure that they were simple and easy to do, and that you don’t have a lot of cake leftovers. The kind of cake I love is the kind that comes out of the oven, you cut it while it’s still warm – you just can’t wait! – and it doesn’t even need the icing because the cake base is so great it can stand on its own. I say in the book that all the cakes can be simply dusted with confectioners’ sugar; you don’t necessarily need the buttercream or the other toppings that take time – even though they are in the book as well if you want them. The cake recipes are yummy enough on their own that you can cut it warm, sprinkle some confectioners’ sugar on it, have a cup of tea, and call it a day. I’m happy now just thinking about it.

MC: I know. I wish we had some cake right here! [laughing]

MC: One of the things that I love about the book is that there are so few cake recipes in it. You curated it. You say in the introduction there are no chiffons, no angle food cakes, these are all cakes that are easily made and they are not the kind of cake that stresses you out. How did you go about choosing which ones would have recipes in the book?

OW: That was tough because I wanted to give the baker at home an arsenal of back-pocket cakes. I thought that anything that required technique, anything that could possibly go wrong at home, I wanted to cross them out right away. When I first moved to New York, my husband and I lived in a one-room apartment in Hell’s Kitchen, and I’d just had our daughter. We barely had any counter space, and I didn’t have any fancy equipment at all. And so, whenever I had a cake craving, I started making cakes that could be done with two bowls and a whisk and nothing more than that - and a humdinger oven. I really had an appreciation for the bakers that are limited with what they have on tap. That’s why my chocolate cake, my lemon cake, the cinnamon cake, the madeleines, they can all be easily put together and don’t need any technique. Although I do have a few hard-and-fast rules.

MC: You have some great tips for bakers, which were great. One of my favorite tips is to check the expiration date on your baking powder. I went and did that and found out that mine expired in 2017. [laughing] Thank you for that. I threw it out. What are some other tips for bakers?

OW: I’ve got a few rules. You’ve got to grease and line your pans. I know it takes five more minutes at the top, but that’s your insurance policy and that’s what going to give you a glorious cake at the end. It’s not going to break at the end and you won't be swearing your head off. The other place where a cake can get unstuck is that people tend to overpack their measuring cup with flour. For years, I baked cakes successfully without a scale, and I know there are a lot of people who do not have them. If you do have a scale, that is the guarantee to getting the cake right. But if you don’t, I describe the technique that I do which is I get my measuring cup, spoon the flour into it, don’t compact it, don’t compress it, and sweep off the excess. That way you get about 130 grams of flour in a cup every single time. To me, that’s the sweet spot for the cakes in Simple Cake. If you do overpack your flour you will get a dry cake.

MC: Right. You’ll get a tough cake. And there’s no going back from that.

OW: No. There is not. And the other part that I think is important is to set your timer.

MC: It’s true. You called the book a choose-your-own-adventure book when it comes to putting the cakes together. What do you mean by that?

OW: What I thought was, if someone has 10 cake recipes, and they’re easy enough that over the years you might even remember them off the top of your head because they’re not requiring special ingredients, they’re pretty simple in the instruction. And then I was like, often when I do my baking what do I have in my house? That dictates what cake I end up baking. Then I though, well, if you understand that I have these flavors and these topping options, then I have infinite possibilities here. That gives you more wiggle room as you get more comfortable with baking so you can then experiment. You can think, I’ll try the chocolate madeleines and maybe I’ll dip them in Toblerone ganache – that sounds good.

Often when you bake a cake it gets into your muscle memory. It’s this sense of like, me and the lemon cake, what are we going to do today? Maybe we’ll thicken the batter or add just a bit more liquid or I’m going to throw some of the thyme from the backyard into my syrup. That’s where I have got a lot of pleasure from baking. Because the cakes aren’t elaborate, I can then bring a bit of creativity to them.

MC: In the frostings and the fillings.

MC: When you think about putting cakes together for that someone special - maybe they have a broken heart or they’re down in the dumps or it’s their birthday - how do think about putting together a cake, the filling and the frosting. What’s your thought process with the flavor and textural combinations?

OW: If it’s someone specific and I know that they like something like my lemon cake, I’ll give them what they want. If I've got my coconut cake and I think, well, raspberries go well with coconut, maybe I’ve got a pound of raspberries; I’ll put them either in the batter or I’ll serve them on the side. Then I’ll think, I have coconut, maybe I want a bit of crunch on top. So, I’ll think about toasting some coconut flakes, and then some dollops of whipped cream. I’m just trying to get all my senses and all the textures bang on the money.

At the same time, I also think that right now there’s a tendency in food in general to throw in too many flavors. Sometimes I think we’re just trying to squeeze too many things in there at once. I really love when there is a hero flavor. Let’s say for the coconut cake, coconut is the hero flavor, so I’m going to let that shine. Whatever I add in there I just want it to be the backup singer. Cardamom goes really well with coconut, so I’ll add some but I won’t let it be overwhelming, I’m going to have it be subtle and let the coconut shine.