Who broke the lunch break? Bee Wilson considers the disappearance of lunchtime

by Shauna Sever
Listen: Who broke the lunch break? Bee Wilson considers the disappearance of lunchtime
08:43 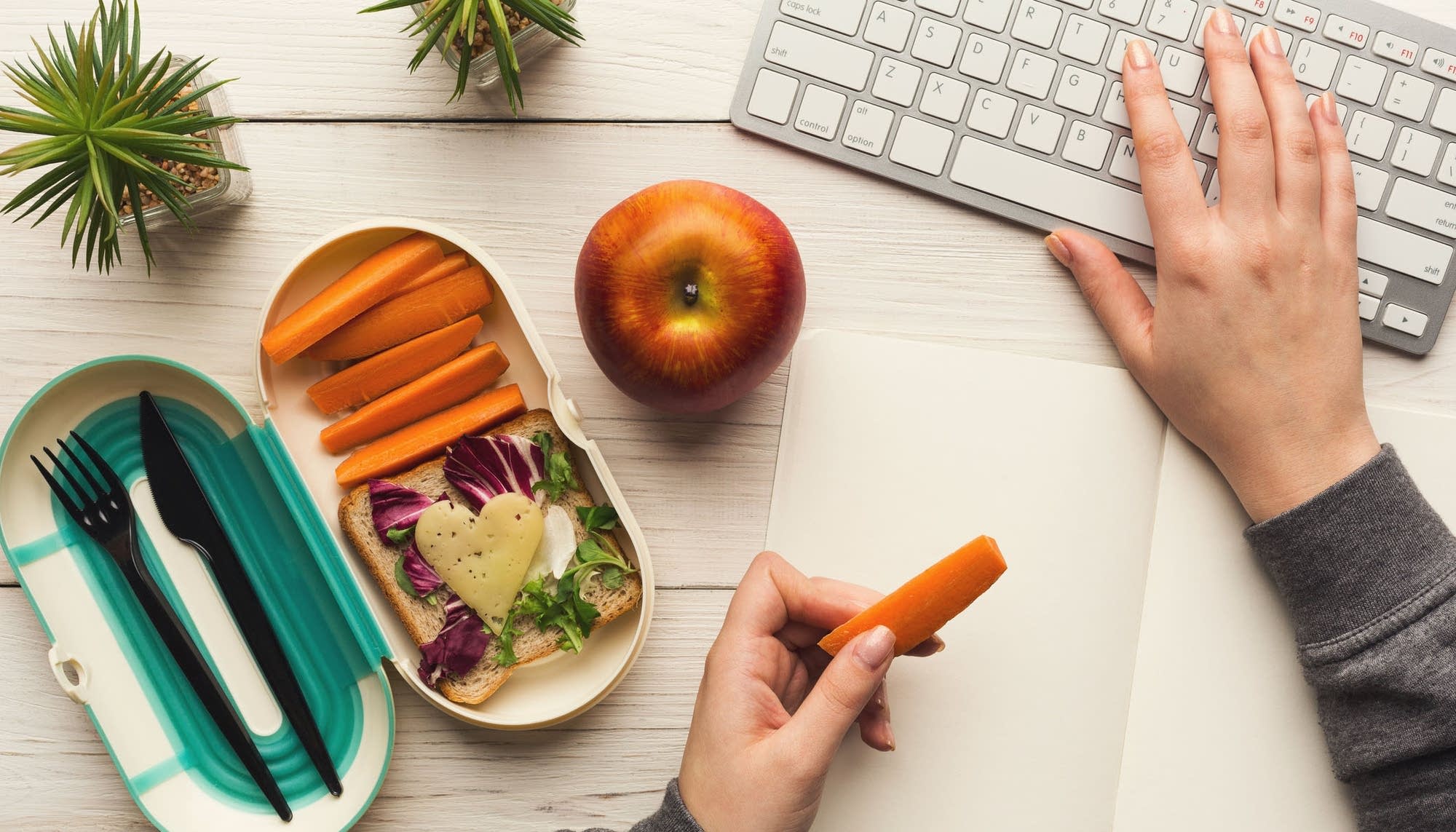 Here's a thing we seem to all have in common - lunchtime is disappearing. From to once-sacred lunch and siesta cultures to #saddesklunch, lunchtime, as a time to recharge and live a life worth living in this beautiful world in community with friends and family, looks like it's on its way out. Bee Wilson is a food historian and the author of the forthcoming book, The Way We Eat Now. Shauna Sever talked with her about the decline in lunchtime as both a break for nourishment and a mental reset in the middle of the day. Need ideas for your packed lunch? See our recipe collections for sandwiches, salads, and soups.

Shauna Sever: I have to ask you, what happened to lunch? Where did it go? When do you think it became a luxury to take a pause in the day specifically to eat? At what point in time do you think lunch took a backseat?

Bee Wilson: I think it's been happening for a while but I really think the change has happened largely in the western world since the 1960s. I interviewed someone who was a nurse in British hospitals in the 1960s, and she was saying that the lunch break used to be like a pause in music, it was there break up the rhythms, to refresh you, to revive you for what came next. And lunch breaks used to be not just something you were entitled to but you were kind of expected to stop and sit down and have lunch all at the same time as your coworkers.

Whereas now, even if people have a lunch break, there's a sort of sense that you ought to be using it for something more important supposedly than eating. Whether that’s doing a super fast workout at the gym or catching up with your online shopping or checking yet more emails. And I find it really sad because lunchtime wasn't just about food and ingesting nutrients, it was about the rhythms and rituals of the day, and we lose a huge amount when we lose that moment of sitting down, potentially making eye contact or at the very least looking at your food before you eat it.

SS: Something I hadn't consider before reading your book is that fact that having a traditional lunch hour – noon to one o'clock is fairly traditional, I think – gives a communal rhythm to the day. So, even if we're eating lunch alone we know that others around us are doing the same thing somewhere. Somehow there's comfort in that. What do you think the impact is of losing the sense of communal eating?

BW: I think it's huge, and I think you put your finger on it. I think it makes us feel alone and slightly chaotic. There's this word, commensality; it used to mean eating at the same table. There's an anthropologist named Claude Fischler who said that commensality is what provides the basic human script of eating in a free society. There’s this idea that we're sort of synchronizing our eating.

As you say, people have always eaten alone; there have always been times when people ate hurried meals or ad hoc meals; or they just took a bit of bread and meat, put it in their sandwich and went off to the fields to work. But what there hasn't been is this sense that eating could happen at any time of the day and there’s this thin ribbon of time when you might choose to have your lunch at 10 a.m. and I choose to have it at 3 p.m.

I came across some graphs that we're studying the use of time that people had in Europe from the 1990s up to the early 2000s, and what these graphs show is there are still societies – or there still were then – such as Spain and France where you can see these distinct bulges of time around midday and then again in the evening when everyone, give or take, is eating. Whereas in the Anglo-Saxon world – in the UK and presumably in the United States as well – eating is just this thin ribbon of time and there's no set pattern and there's no sense of duty about when to eat it. Which in a sense could feel liberating, but I think it also feels quite scary.

SS: I loved those graphs; I thought that they were really impactful and it shows just how much it’s shifted in the past 10 years or so, where some of those places that use to hold lunch sacred aren't doing so anymore. Is that about the right time frame?

BW: Yes. I would say in about the past 10 years. Even in Spain, Italy, and France, there now this sense that we ought to be hurrying from one task to the next – and it's sad. It's not just that we're losing out on this nice period of rest when workers can sit down and regroup, it’s actually impacting our health. There were various things I came across that suggested this.

There was a really important piece of research done in the late 1960s in the Bay Area of San Francisco where a team of researchers looked at Japanese American men and their risk of coronary heart disease. What they found was that as these men had moved from Japan to the U.S. their risk of heart disease went up in every case, but some of the groups of men were at much lower risk of heart disease than others. They found it wasn't actually what these men were eating that made the difference but how they were eating it. The ones that had lower risk of heart disease were the ones that were culturally the most Japanese. In other words, they were still eating in a communal way, they were still making time for food, they still spent time with their families when they were eating. And we think that’s a matter of no importance. Our culture talks about food as if it's just a matter of carbs and fat and vitamins. We completely forget the how of eating, which may turn out to be the most important part.

SS: How can we bring it back? Will the traditional lunch hour ever return?

BW: I really hope so! I fear – and it’s really sad – that like so many things in our food culture that we may be forced into making change by the fact that so many people's health is suffering for a lack of a lunch hour. You can see it with nurses who are at a much higher risk of obesity than the general population. Sometimes people make this judgmental comment of, “They’re healthcare workers. How can they not set a good example?” But actually, the reason that nurses are at higher risk of obesity is because they have no time in the day to stop and they may have only access to unhealthy vending machines on-site. We desperately need employers to see that allowing your employees time to stop, sit, and maybe to reflect – even if you're only eating a sandwich or whatever it might be – that time is part of the component that nourishes us.

SS: And we see it coming back on social media as sort of the cool thing to do with the #notsaddesklunch, where it’s become almost celebrated. If you can take the time to do this for yourself it's become one more thing for us to aspire to, I suppose. What are some practical ways to ensure that we're making lunch a priority for ourselves and that were doing it in a healthy way?

BW: I feel quite encouraged by that trend; there's that whole vogue for meal prepping, isn’t there? Sometimes, as with everything on social media, it goes slightly obsessive-compulsive, and you have these people making absolutely perfect rectangular glass dishes of amazing food that they're bringing for the next five days. But on the upside I feel there is this vogue of people saying, “No, I'm not just going to settle for some sad drooping sandwich that cost too much and doesn't give me much pleasure. I'm actually going to cook something delicious the night before and then I'm going to open my box of food,” and it's almost like a gift to yourself when you have a delicious lunch that you packed from home. Even if you have only got 20 minutes for your lunch as opposed to the full hour that people might have enjoyed in the past, at least you can sit and enjoy that. I think that’s been a really good trend, the rise of the pack lunch.

BW: And other than that, we need to change our priorities. We need to get back to thinking that eating lunch during your lunch hour is not a waste of time; it’s what the lunch hour was designed for. Sometimes food needs to shift back up our list of priorities. Sometimes the emails can wait.

Bee Wilson’s forthcoming book is The Way We Eat Now; it will be released May 7, 2019. Shauna Sever’s latest book is Real Sweet. We have some lunchtime inspiration for you with a recipe for Hungarian Casino Egg Salad from the book Artisan Jewish Deli at Home by Nick Zukin and Michael Zusman.

Shauna Sever is the author of the cookbooks, Marshmallow Madness!, Pure Vanilla and Real Sweet. Her latest book is Midwest Made. She is also the voice behind the baking blog Piece of Cake. She's appeared on The Today Show, Food Network, Home and Family, Serious Eats, Chow and Ulive.com. Her writing and recipes have been featured in O, The Oprah Magazine, Food and Wine, Bon Appetit, Fine Cooking, Family Circle and USA Weekend.
Tinned Scallops and Kelp Pesto
Sheet Pan Chow Mein
Peanut Stew with Spinach and Miso
Mussels with Chorizo and Beer