Bagels past and present with chef Dianna Daoheung

by Francis Lam
Listen: Bagels past and present with chef Dianna Daoheung
10:09 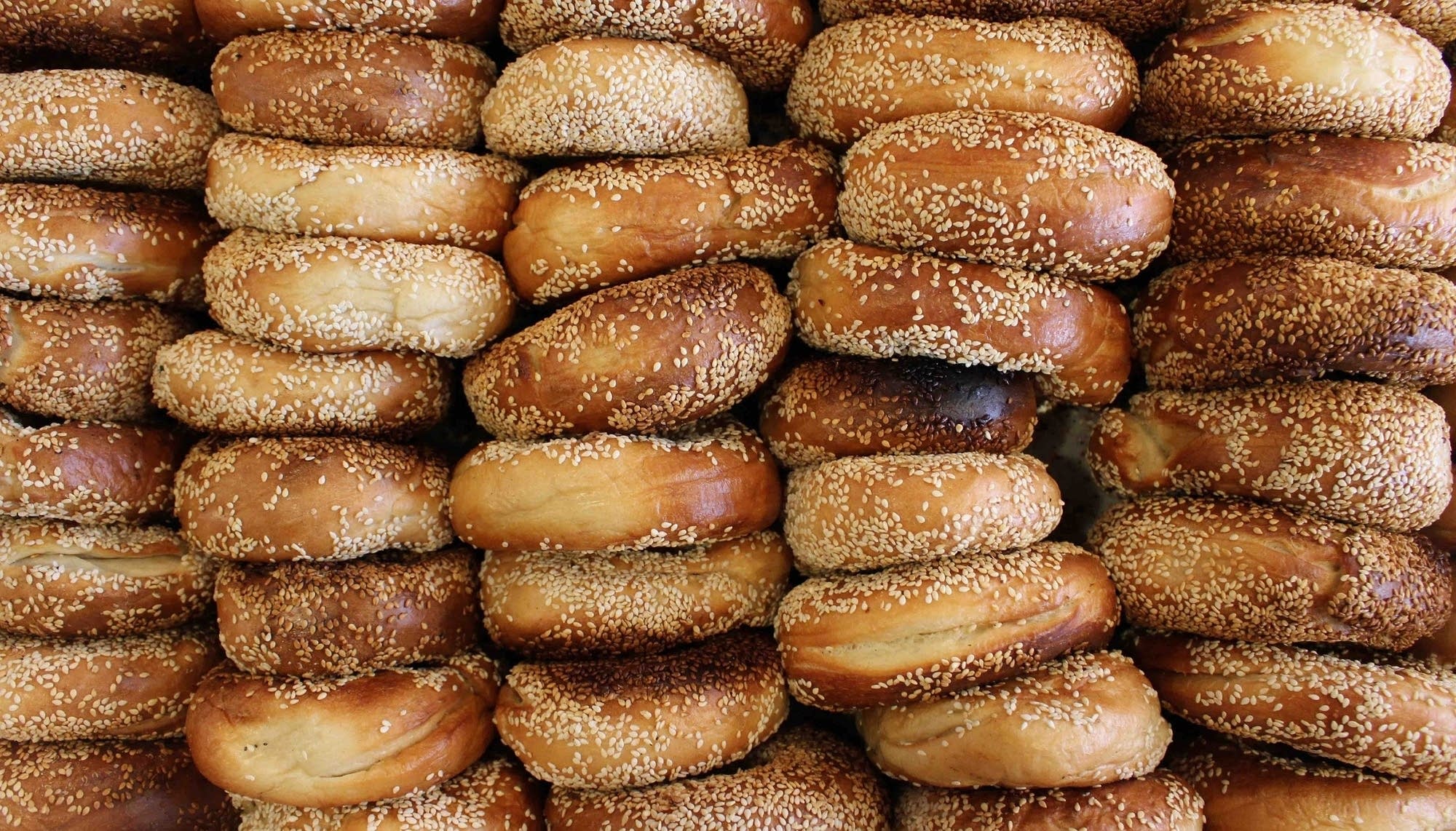 New York City is known worldwide for its bagels, but they are not the be-all, end-all. There are many traditions and styles within the world bagels. Dianna Daoheung is the executive chef and head baker at Black Seed Bagels in New York, and a two-time James Beard award nominee for Outstanding Baker. She stopped by the studio to talk with Francis Lam about the history of bagels and their stylistic differences. They also taste bagels including her own from Black Seed, which are a hybrid of the New York and Montreal styles. If their conversation gets you craving a bagel you can make at home, try this recipe for Montreal Bagels from Marcy Goldman.

Francis Lam: Hey, Dianna. How are you?

FL: I'm doing more awesome, because now that you’ve walked in, the scent of these beautiful bagels, their seeds and their garlic is wafting through. I want to start with the question of the New York bagel. I grew up in New Jersey, so every bagel I ever had was a New York bagel. But, it is an actual, particular style. Stylistically, what is a New York bagel?

DD: It's interesting because they've definitely evolved. I'll just talk about what New York bagels are today. A New York bagel is huge, bloated, and barely has a hole in it; it looks just like a belly button in a roll, essentially. Very lackluster in flavor, especially for a bread where you want that awesome fermented, yeasty, almost beer-like flavor. A lot of bagels that are now called New York bagels barely have a taste of fermentation in them. It's so far from what they originally started off as in Poland.

FL: What was the model that it's since evolved from?

DD: There are many different stories of how it originally started, but the stories I've heard were that they were a biscuit, or more of a pretzel-like texture, super dense, and a lot smaller. They were also known as bagel biscuits, so probably a quarter of the size of what a typical New York bagel is. Again, they had a much bigger hole. They used to be on wooden dowels – and I think a lot of bagel shops still do this – so the hole has to be big enough to go into a wooden dowel. Again, a lot more dense, less fluffy, not just a roll with a hole in it. It used to be very close to the pretzel world.

FL: And you brought some. I guess we don't have to name where they're from, but this is from a legit bagel bakery. Let's taste it and let's talk about what these things are in their good form today.

DD: These are literally a block away from where we're at now, which is really close to Grand Central, so the Mecca of New York, right? [laughs]

Automatically, the first thing I taste is that lack of real bread flavor. Obviously, it still tastes like bread, because you can taste the flour and salt in it, but it's super fluffy. The size is the first thing you notice, and particularly the hole size. This right here is not a hole. I don't even know what that is. A crack?

FL: There might be some light coming through that hole. The bagel is almost six inches wide and probably two and a half inches tall. I have to say, eating it, it is tasty. There's a little crispness in the crust. There's a sweetness, it’s chewy, but there’s not a flavor that really lingers.

DD: I know these guys boil their bagels, but a lot of new school bagels don't even do the boiling process anymore. There are dough conditioners now that will give you a similar quality of getting that shine and changing the texture. I don't even know what this is because I don't think a bagel is a bagel unless it's boiled; I think boiling is the most important process of bagel baking itself.

FL: What does boiling do?

DD: Boiling does a lot of things. That shine that you get in bagels, that's part of boiling. But, also the texture; boiling kind of strips away a lot of the proteins to give you that more chewy texture that you expect.

DD: If you were to take a regular bagel and not do anything to it – not boil it, not put dough conditioners into it – it would come out like a roll.

FL: How did the bagel get from this intense artisanally made product that had these qualities you're talking about – the big hole, always boiled, the chewiness, the density, the fermented flavor – to the sort of puffy things we see today?

DD: Like anything, there are so many stories behind it. First, the union. A lot of people aren't aware that there was a bagel union that started early on, I want to say in the 1930s, and then developed even greater numbers in the 1960s. And there's also the story of [Harry] Lender himself. Mister Lender was this great business genius. And I think both sides were probably figuring out how they could get more money. Basically with bread, as any bread bakers knows, if you want to double something, you just let it proof a little bit longer. The longer you let something proof the softer it becomes, because it creates more air pockets, more air cells. That's why they're a lot softer now than back in the day. Again, it takes the same amount of labor and ingredients, just a little bit longer time.

FL: And that innovation, so to speak, was attributed to Lender?

DD: Supposedly. That's what I've heard through the grapevine.

FL: There’s also a story about the bagel union going on strike, right?

DD: There were a couple of times they went on strike. Back in the day, making bagels meant gnarly working conditions. The conditions were sweaty because there's a huge vat of boiling water on top of the oven; most bakeries were in the Lower East Side in basements with low ceilings. Bakers were being paid horribly, and were essentially sleeping on the flour bags, having to wake up early, working long hours. So, then the union formed, and like any union they were trying to get better wages and working conditions.

FL: So, when the bagel craftspeople and bakers went on strike, the owners just started mechanizing?

Once they went on strike, the bakery owners couldn’t just stop business. They weren’t making that much money where they could just stop for a couple days. That's when they started hiring other immigrants. Obviously you can't tell on the radio, but I'm not from a Jewish heritage, I'm Thai-Laotian. I think it's interesting that the people that striked created a whole new interest with other immigrants that weren't Jewish and weren't from Eastern Europe to start making something that was not a part of the their culture. I think that's kind of how the bagel became New York. Just like New York has all these amazing cultures in it, bagel baking became a symbol for that in a way.

FL: It actually is a much more diverse story. It's not one single story.

FL: Now you are a bagel baker. When you were developing your style of bagel, what inspired you? What did you want to get at?

DD: Again, not coming from a Jewish background - and also growing up in Florida, where they're really not known for their bagels - I definitely did a lot of research. I went to San Francisco where there’s an awesome shop called Beauty’s Bagel Shop. One of the owners, Noah Bernamoff, is actually from Montreal; the other owner, Matt, is from Long Island. They're both from Jewish backgrounds, so they were tied into what kind of bagel we were going to make. They were like, “Why do we have to do a Montreal-style, or why do we have to do a New York-style? Let's come up with our own style taking from the best of both worlds.”

For those that haven't had a Montreal bagel, they're really interesting in texture. They're definitely closer to an old school bagel. They're a lot more dense and they're all wood-fired. The things that we wanted to take from the Montreal bagel was that sweetness from the honey water. The wood oven is absolutely a key factor to what Black Seed does. But, the one thing that we didn't necessarily always like was how dense the Montreal bagel is. Montreal bagels are very dense. I don't want to say it's hard to make it into a sandwich, but it definitely has a tooth to it. We wanted to create a hybrid between those.

FL: And you have some here. Can we taste some?

DD: Yeah. Absolutely, please. This is probably my fifth bagel of the day, seriously. [laughs]

FL: Wow! There's definitely a lot more heft to it.

DD: Right away you get that difference in density. And also, we do an almost 24-hour proof, where you get more of that fermentation flavor.

FL: Yeah, it's not beer-y or yeasty, but there's definitely a lot more depth to the flavor in the dough, for sure. It's funny, because it's denser, it's not as crisp and chewy as the other more New York style bagel we tasted, but there's a lot more body to it. This feels like a crazy thing to say about a bread, but it almost feels luxurious on the tongue.

DD: That is probably the nicest things I’ve ever heard someone say about my bagel.

FL: As you’re eating it, it’s like hanging out with you. You’re not just chewing your way through it.

Dianna Doaheung is the chef baker and a partner at Black Seed Bagels in New York, and a two-time James Beard award nominee for Outstanding Baker.