Missing ingredient: understanding the effect of time on food and flavor 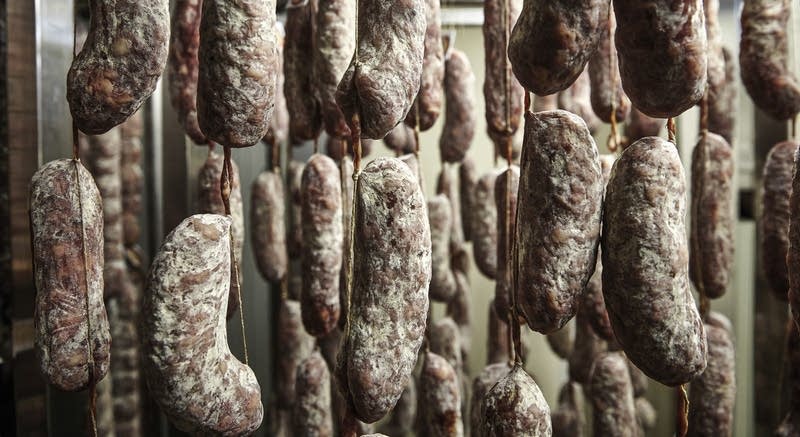 Photo: Charcuterie products are usually regarded as delicacies,
with their high prices reflecting the skill and time taken to produce them.

Cooking is a game of ingredients and instructions. While the element of time is considered essential in all methods of cooking, journalist and food writer Jenny Linford sees time as more than just a reference to how long you do something. She believes time itself is a key ingredient. In her new book, The Missing Ingredient, Linford outlines dozens of essays about the curious role time plays in food and flavor. Organized in sections that are themed from seconds to years, she looks at how time affects the quality and the level of enjoyment of everything we eat. Digital producer Chip Walton talked with Linford from her home in London. You can also read Linford’s full essay “Taking Stock” excerpted from the HOURS section of The Missing Ingredient.

Chip Walton: Talk about the idea behind The Missing Ingredient. How did you first begin visualizing the book?

Jenny Linford: I was literally lying in bed thinking early one morning. Over the years, I’ve run a variety of food events, food tours and talks. I started wondering if I could do an event where I take people on a journey through the history of British food, like a trip through time focused on food, maybe starting with medieval times and moving up through the Victorian era. Suddenly, I had this thought that time is food, because time is such an important ingredient. I was very excited by this amazing idea, and I thought to myself that it could be a book.

The more I thought about it, the more I realized it is quite a slippery subject. I couldn’t just make a book that says, “To boil an egg it will take you this amount of time” or “It takes this long to cook a steak.” We have cookbooks for that already, so it would make for a rather dull book. And this idea of time as an ingredient is a much more interesting idea. I had to consider how to write on such a complex and overlapping subject.

I had a second epiphany a few months later when I thought about structuring the book from seconds to years and including different essays on all aspects of food and time, because all of these things need to be considered in their own right. You can write about proper cooking times – such as that of custards or omelet – but you can also write about the time it takes to raise livestock and about the hanging of meat to develop flavor. But there’s also topics like resting meat after it’s cooked that are very complex subjects that need to be separated out. The individual essays are presented as prisms, but the book itself is a kaleidoscopic view of time.

CW: In the book we hear from an interesting cast of characters about their thoughts on food: chefs, cooks, pastry makers, brewers, food scientists, anthropologists. How did you approach your conversations these different personalities about the same topic?

JL: I love that food comes with cultural heft. It’s about identity, landscape, history and agriculture. I wanted to put all of those voices in the book. I think it’s partly from my childhood, living abroad, having a mother from Singapore and living there, and then living in Italy. I have this sense of food carrying a sense of place with it. Food people are fascinating; one of the joys of being a journalist is meeting and talking to people that are so interested in what they do. There are so many great characters.

I didn’t say to these people, “I’m writing a book about food and time” because I didn’t want them to just focus on the time angle. What would make this book interesting would be to have a context within which time was working. Instead of knowing that pasta takes two minutes to cook, I wanted to learn more about the long history of pasta and how it’s transformed. So I would tell them, “I’m writing a book about what makes good food.” As we talked, the topic of time would always naturally come up because it is an ingredient and a tool. Sometime people are putting time back into a process that has been industrialized and streamlined in order to make it better and more authentic. Some people would talk about how quickly cooking something delicate gets you one result, but slow-roasting a tough piece of meat gets you a completely other, equally surprising, result.

CW: You are make the point that time is an important ingredient in food and cooking. What are some different ways you’ve found other people think of time?

JL: We live in an era where it’s never been easier to cook, given refrigeration and freezing, and the tools that we have like gas stoves. But it struck me how often people are begrudged by cooking; they see the time spent cooking and enjoying food as time wasted – which I find sad. We live in a digital age where we’re used to things happening at the touch of a button. There are also a lot of shortcuts in processed and pre-prepared foods, but those shortcuts come at the cost of quality and healthfulness.

There are also services that deliver restaurant food to your home, which is also very interesting. Eating at a restaurant is about more than just the food. If you’re having it delivered, you’re still paying restaurant prices, but you’re missing out on the ambience, the service and the atmosphere. Modern life is built for convenience and is also very fragmented. We’re moving away from the dedicated time to eat and enjoy food. It’s an ancient, human idea to sit around the table, share food, and talk. It’s time spent together, not attached to our screens or in our separate spaces and rooms. A shared mealtime is a place that allows for conversation and helps keep people engaged in each other’s lives.

CW: Some people see time as roadblock. Instead of looking at time as a space to work within, they see it as something to work against. You hear it all the time, people say they are racing against the clock or that time is against them. It’s a rather negative outlook, right?

JL: One thing that comes up a lot is this idea of people having the time to cook and people saying they don’t have time to cook. When I was growing up, mum and dad both worked and they still cooked. Back then – before microwaves and Ready Meals – in order to eat you had to cook for yourself. Given that eating is a fundamental act to stay alive, you don’t really need a lot of time to cook. There is a lot of evidence that cooking for yourself from scratch, not eating processed meals, is one of the healthiest ways to be eating. And you control it. If you made a fish pie, you know that all it has is fish, white sauce, potatoes – nothing’s being added without your knowing, nothing is being speeded up. But there are also ways to cook quickly that don’t compromise flavor and quality. Look at stir-frying. You have very high heat with all your ingredients prepped and it comes together in a flash.

CW: You mention talking with people who are intentionally putting time back into food production – versus actively streamlining them – for the sake of quality.

JL: Over the past 25 years, there has been a rise in food producers – whether you call them artisan or craft food producer – who are using traditional methods to make things like bread, cheese, and chocolate. Often what they’ve done, aside from making food with more care and attention, is they’ve invested a lot of time. And you can taste the difference.

That’s one of things I was trying to express in the book. Some people look at those foods and say they are too expensive. But as we know, time is money. So, if you put time and care into your work, let’s say artisan cheese which requires a lot of looking after – adjusting temperature, brushing, turning, washing it with brine solution. All of that is time and energy, and it’s reflected in the price. An inferior product that was quicker and easier to produce will of course be cheaper.

It also takes time to learn to do something the right way. Sometimes it requires decades to perfect a craft. Skill comes from repetition – doing it over and over again – and learning from it. I think that time practicing and perfecting is as valuable as the actual food created.