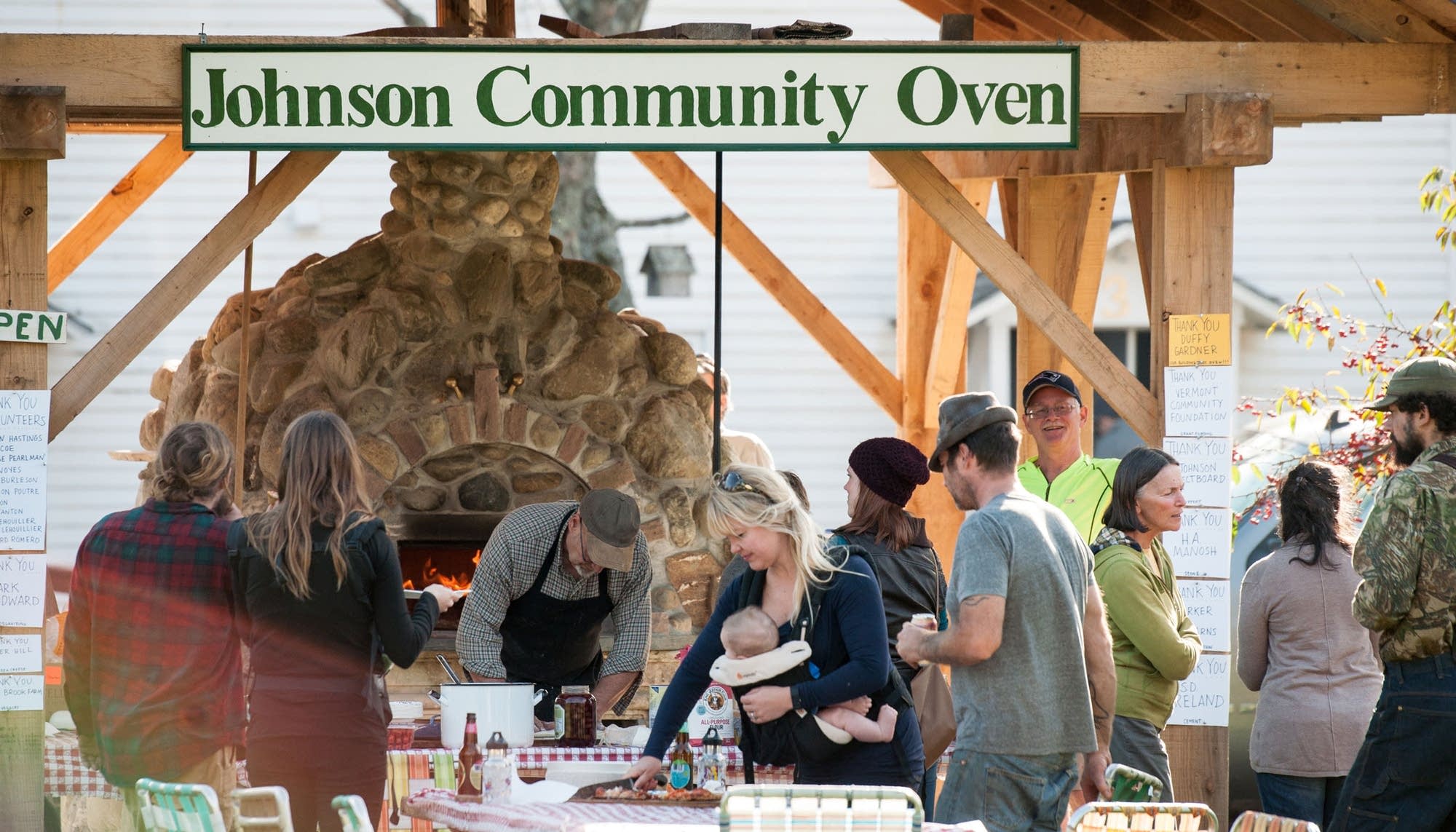 It’s funny to think that many of the things we take for granted are relatively new concepts, like having your own oven in your own kitchen. In some societies, even today, whole villages might share a single oven that someone fires up, and everyone brings their bread to bake or their stews to braise. The idea of community ovens has also taken hold in towns across America. Artist and school librarian Jennifer Burton wanted to see what having a communal oven might do for her town of Johnson, Vermont. So, last year she helped build one in a public square. Our contributor Melissa Clark talked with Burton about her inspiration to build the oven and how it's being used by people in the town.

Melissa Clark: Tell us about the oven that you built.

Jennifer Burton: My friend Mark Woodward and I built a wood-fired oven. It's open to the community, it's there for anybody within the broader community to use, not just our town of Johnson. People sign up through the town to use it. They have to submit a use application, they receive training on how to use the oven, and then they're free to use it for their event.

MC: I've never heard of a community oven like this. Where did you get the idea?

JB: In 2014, Mark and I heard a Vermont Public Radio story about a community oven in Norwich. We both really liked that idea, and we talked about it for a long time before this happened. I have family in Portland, Oregon who have a wood-fired oven in their backyard. They open it up to their neighborhood and community; they have neighborhood bakes where people will bring their own breads and other things to bake in their oven. Those are the two things that got this going for me.

MC: Johnson, Vermont is a town with a lot of transient people because of the Vermont Studio Center and students coming in. How do they feature into this?

JB: One of the reasons that we decided to build the oven was to address that, to bring this diverse group of people together, to give them a gathering place where they might intermingle, and where they might create a sense of community, even if they're only there for a short time.

MC: And they can get to know each other over food.

JB: Yes. Which was one of the big impetuses for doing this. We’re using food to bring people together and rekindle that old-fashioned way of coming together around food with an oven and baking communally.

MC: What kind of events do you have there?

JB: It was built in October and we had it closed for the winter. I was concerned about it cracking due to the heat differentiation between the subzero temperatures and the high heat of the oven. So, it didn't get used over the winter. But, this spring neighbors of the oven used it for their birthday party for their young child. The Vermont Studio Center used it for one event, the school used it for a health fair, and I think the library has also used it.

MC: What was the most challenging part of putting together this project?

JB: The most challenging part came from people in the town, primarily with concerns about where to locate the oven. The local historical society was very intent that we not get them to move from their corner of a certain park – and we didn't. Other people wanted us to have it in a different park on the outskirts of town; it’s a park that honestly when they said the name of it I didn't even know was there, which was one of the reasons I didn't want to have it there. We wanted to have it in the center of town, in a place where people would see it when walking by and know it was there as a resource.

MC: How should people use it? What are some of the great things to make in a wood-fired oven that you wouldn't necessarily make in your regular oven at home?

JB: Richard Miscovich has a great book called From the Wood-Fire Oven. One of my favorite things from that book is the recipe for ember-roasted onions where you put them in and you almost let them burn on the outside. The inside gets baked so nicely; they're delicious when they come out. They're great for putting on breads and other things. But, we’ve also experimented with pretzels, pizza, and cookies. The tricky thing is making sure that the temperature is right and moving things around into the proper locations so they bake well.

MC: Do you think that when people get together over food and cook together, it's a different way of them relating to each other? Do you think act of cooking plays into it?

JB: The act of cooking brings people together, yes. But there was a study that Shankar Vedantam shared about when people share the same kinds of foods, they're more likely to agree on things and to come to consensus faster than when they're eating different kinds of foods. That was something to consider in this process of. I think when you're eating the same things and cooking together it creates a sense of coming together and agreeing on things more than when you're not.

Melissa Clark is a food writer, author, and host of our new podcast Weeknight Kitchen with Melissa Clark. She is a food columnist for The New York Times, and has written more than 30 cookbooks including Dinner in an Instant, Cook This Now, and In the Kitchen with a Good Appetite.
Baked Buckwheat Pancake with Berry Compote
Raw Sweet Potato Salad with Peanut, Fish Sauce, and Lime
Seafood Gumbo
Miyeokguk (Korean Seaweed Soup)