Vegetables require more than technique, you need a good plan 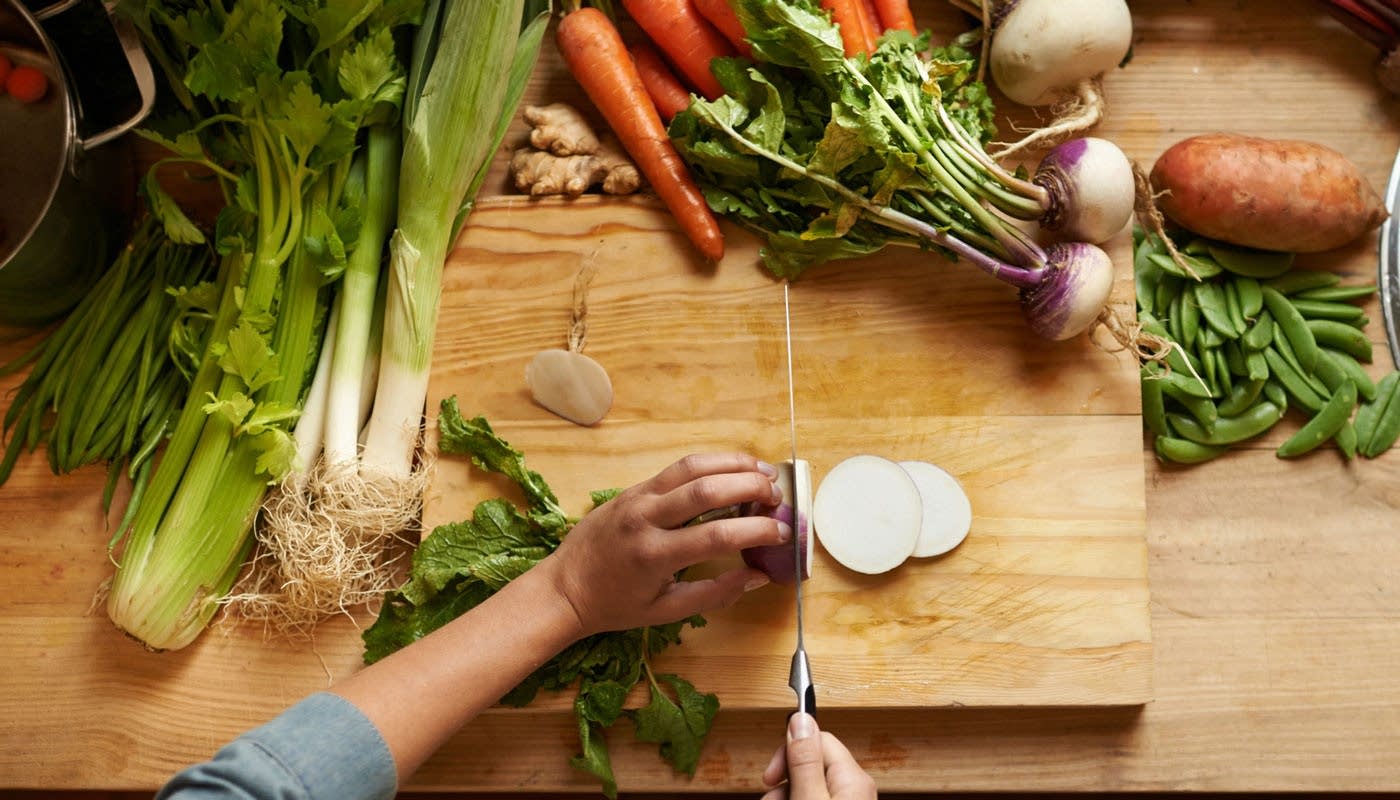 Diana Henry is one of Britain's most admired cooks. She's written 10 books and her new one, How to Eat a Peach, is as much about planning a meal as it is about how to cook it. Our contributor Melissa Clark, of The New York Times, talked with her about how she takes her ideas for composing meals and applies them to vegetables without the big beef roast to go with them. Try her recipe for Roast Tomatoes, Fennel and Chickpeas with Preserved Lemon and Honey.

Melissa Clark: Your new book is all about menu planning. Tell us how you plan a menu around vegetables – because I know this is one of your favorite things to do.

Diana Henry: You have to think about vegetables in the same way that you might think about meat or fish. It's very easy to make roast vegetables; it’s the most obvious thing these days, and I love them. But, you need to think about things that you might poach or griddle as well as roast. It's a matter of thinking about techniques. And because meat and fish are such centerpieces I tend to think of dishes that I can serve on a platter. I hate this use this phrase, but it makes it a “statement dish” if you do that. Honestly, when I think about meals, I rarely think about making a vegetarian meal or that I'll do walnuts with meat or fish; they tend to just come into my head

MC: Tell me about the “statement dish.” What do you mean and how do you put it together?

For example, in the book that I've just written there is a platter of roasted fennel with tomatoes and chickpeas. You do them all separately so that they stay apart. You don't have this hot pan of vegetables that have softened down to nothing; they still have structure. That's got a dressing that has preserved lemons, a bit of honey, vinegar, and olive oil. On the side I'll put couscous or a flatbread and probably serve something like Greek yogurt with grated garlic in it or feta. So, I'm thinking of it and building it up. The main dish does have to take a little bit more thought than just a hunk of meat. But I don't think it's difficult once you think about accessorizing vegetables just the same way we do about accessorizing bits of meat and fish.

The other thing about doing vegetables dishes, especially at this time of year, is that they are better prepared in advance. I was talking to Yotam Ottolenghi recently and I asked, “Why did you go so vegetable-centric when you opened your places?” Funny enough, it wasn't to do with the love of vegetables. It was to do with the fact that with the display at the front of his restaurant, you can leave vegetables right there for a couple of hours and they still look right and are perfectly good to serve. It wasn't because he wanted to serve vegetables, it was because you can prepare those in advance and they still look great. I thought that was interesting.

DH: I noticed this the first time I went to France when I was a teenager, which is funny because they are so meat focused. But that's when I noticed them putting vegetables in in a way that we didn't do well at home. First of all, every meal started with radishes, which are great from the spring right through to October – we’d always have those. In the winter, they had grated carrots with a lovely dressing and leek vinaigrette. In the summer, just as a kind of precursor to whatever else there was, there were tomatoes in a salad and there were cucumbers, very finely sliced, with dill and a dressing. Even though they started that way, they always had a green salad after the main course. And in summer, like right now, when I finish talking I'm going home to do asparagus. This time of year, that's always an extra meal or it becomes the central thing once you add crab, crème fraîche and salmon caviar, or you add fried eggs and Parma ham and lots of grated Parmesan. I either make that the main deal or I will sneak it in as an extra course.

I make lists because I'm such a nerd. And because it's asparagus time, I'll make a list of all the things that I can easily do that are asparagus based for supper, and then I’ll rotate those. Once you start to think about vegetables at this time of year, you think Middle Eastern, Italian, Asian. Recently, I’ve been doing a thing I had in Turkey. It’s slightly drained Greek yogurt mixed with dill and coriander; I also put some fresh chili through it so that against the coolness you keep hitting these little bits of heat. I serve that with beetroot, which can be raw or you can cook it sliced and sautéed with cumin seeds. We also tend to forget about carrots because they seem like they’re for the winter. You've got a crunch from those; I toss that on top of the dressing with cumin seeds in it. So, you’ve got crunch, softness, heat, coldness and the herbs. That's so easy and I love that kind of eating.

Melissa Clark is a food writer, author, and host of our new podcast Weeknight Kitchen with Melissa Clark. She is a food columnist for The New York Times, and has written more than 30 cookbooks including Dinner in an Instant, Cook This Now, and In the Kitchen with a Good Appetite.
Herbes de Provence Loaf
Roasted Veggie Bowl with Green Goddess Dressing
Tinned Scallops and Kelp Pesto
Sheet Pan Chow Mein