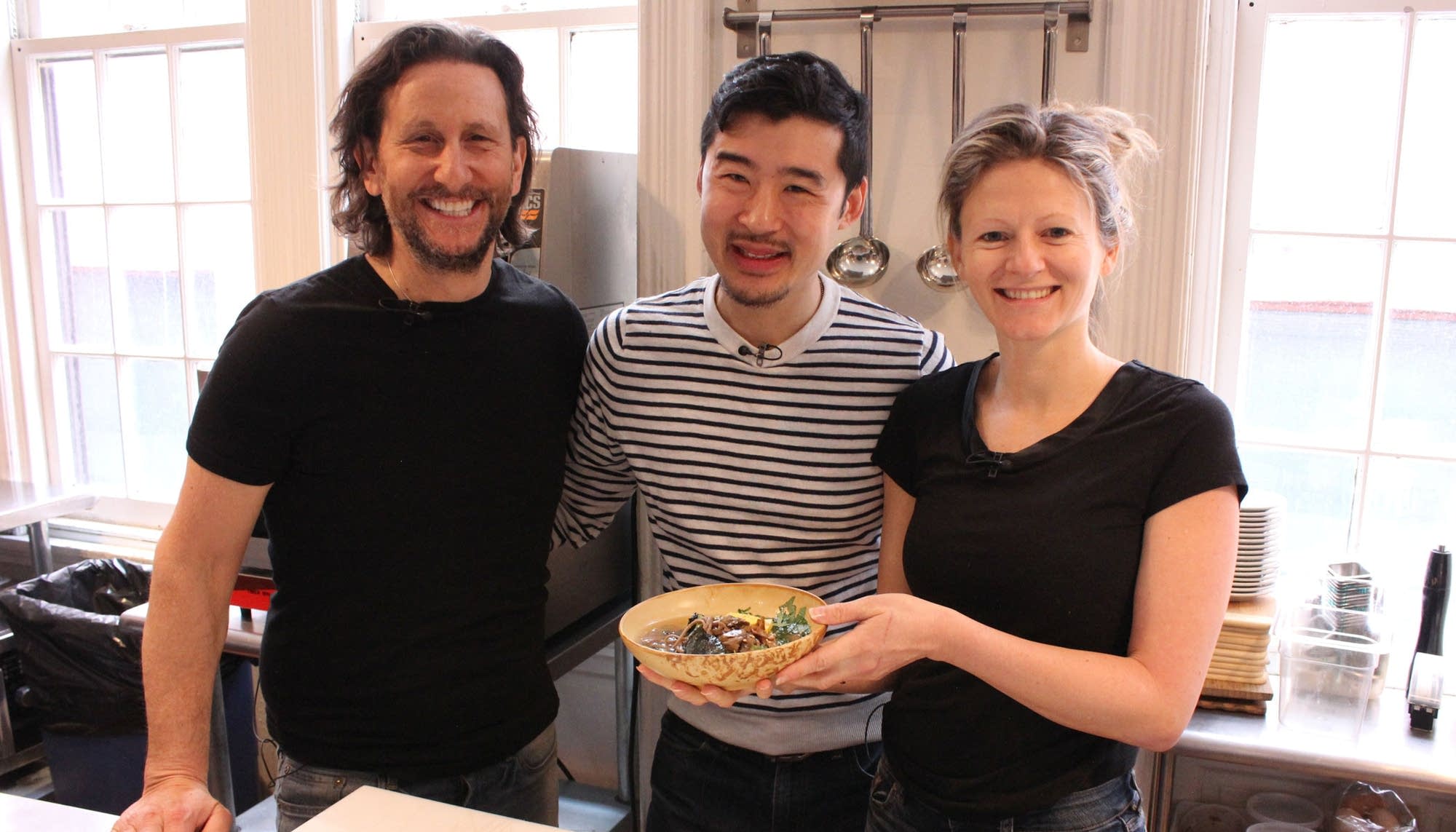 Kate Jacoby and Rich Landau are the husband/wife team of chefs behind Vedge, a vegan restaurant in Philadelphia, where they have been offering an exciting dining experience inspired by seasonal vegetables since 2011. Francis Lam visited Jacoby and Landau in the kitchen of their restaurant to learn more about their cooking techniques and what three dishes they consider essential to the vegetarian or veggie-loving home cook. They were also kind enough to share with us their house recipes for Shiitake Dashi, Summer Corn Custard, and Chickpea "Tuna" Salad.

Francis Lam: We're here today to talk about our Key 3 segment; we go around to cooks who we love and admire, and we ask them a very basic question: What are the three things you think everyone should know how to make?

Kate Jacoby: So hard to do! But, I'm going with custard. It’s so simple. You could use any plant milk – oat milk, almond milk, anything. I use coconut milk because it’s rich and creamy. It's a great canvas for just about any kind of flavor you want to jump into. That's my go-to; I use it all the time in a lot of different pastries. And custard can be done very simply. Rich, you had the other two.

Rich Landau: I think about what I do at home. I like to consider myself a "normal person" who works 14 hours a day, seven days a week. [laughs] Other than that I'm perfectly normal; I come home and look in the refrigerator. Contrary to popular belief chefs really don't cook a lot at home; we don't make ourselves these elaborate feasts. What we do like to do is eat to fuel ourselves so that we can continue to cook for other people. I'm a big fan of making things that you have for three to four days, maybe even a week, in your house that you can use quickly to make whatever else you're making that much better.

FL: I have a two-year old and that's my whole life right now. I make everything on Sunday, put it in the fridge, and eat it through the week.

RL: There you go. You're already in the mindset. My first go-to one goes back to my childhood; I used to love tuna fish salad – almost everyone does. I'd make it for myself on Sunday, like you said, and just eat it all week long. My alternative to that is a chickpea tuna salad. You take chickpeas out of the can. There's two ways to do it: you can take a potato masher and crush them, or you can put them in a food processor and pulse them four or five times to break them down a little bit. You don't want to make it into hummus or you've gone too far. Celery, onion, pickles, vegan mayo, a little bit of mustard, and whatever seasonings you had in your childhood. Don't reinvent it; you want to give that comfort food sort of hit. For me, that's Old Bay, dried oregano, lots of black pepper and a little salt.

FL: That's a classy tuna salad when you're a kid. That’s perfect.

RL: It’s great. The key is that you don't eat it right away. You’re going to be tempted, but just go find an apple or something. Let it sit in the fridge for a couple hours and then you have it all week long. Also, don't be bound the chickpeas. You can use hearts of palms, artichokes, anything canned. [laughs] It’s funny the taste of childhood came from a can. But, that was the 1970s and 1980s.

KJ: It’s about convenience. That's one of the reasons we wanted to put that out there; it's so easy and yet so delicious.

RL: Our third pick for an easy go-to is a stock, and we’re going to show you how to make this right now. This is called a dashi. In Japanese cooking, dashi is made from fish and kombu seaweed. Obviously, we're not going to use the fish. This is in everything in Japanese cooking; it’s in all their stocks and sauces, which makes it very hard to eat vegetarian there. We make ours with kombu and dried shiitake mushrooms instead of the fish.

We have boiling water here. We're going to fold this giant, massive sea vegetable in here. It has to be kombu; other seaweeds won't work for this. There are tons of them out there, and everyone probably has nori at home these days – it’s got to be kombu. And the particular brand I like is called Dashi Kombu – look for that on the package. It has all these natural umami flavors going on in there. It just fills your mouth up when you're eating it and basically feels like you're eating so much more than just the stock.

FL: It has almost a natural gelatin thing going on. It comes off very light, but you can see there's a body coming off of it.

RL: Absolutely. We have our dried shiitakes, and it’s important to use the dried ones. If you have fresh, it’s okay to throw them in, but you’ve got to have dried as well. It's just like a dried herb; there's a concentration of flavor going on. The fresh mushrooms still have all the water in them and don’t have the deep concentration of flavor. We're going to simmer these. This is so easy, and your house is going to smell amazing after this. Now, we do need a little bit of soy sauce in there. We use a gluten-free tomari for this so that everyone can eat it. The trick is to just let it simmer away.

This is your basic version. You can make this more of an elaborate stock by adding more things to it; you can get as crazy as you want. You can use onion trimmings, celery leaves, kale stems, broccoli stems; it will only make it better.

FL: It's crazy because I have made dashi at home the traditional way with the kombu and the bonito flakes – the fish flakes – and it's a wonderful flavor, but it's very saline. It smells and tastes like the sea. Here, with the shiitake, it’s earthy. I mean it's like the forest and the ocean right now.

RL: Surf and turf, all right there. A surf and turf stock! It’s a beautifully complex flavor. There’s no end to what you can do with this. This is your base for miso soup; stir in miso with tofu and scallion, and you're done. Kate and I eat noodle bowls for breakfast. After taking several trips to Asia, we will never touch an American breakfast again. So, we eat noodle bowls every morning for breakfast. Use it if you're making any kind of stir-fry. You can use it in your mainstream Western or European cooking. It won't taste Asian, but you'll add all this umami underneath; it creates a foundation of flavor, that X factor that vegans are missing when they eat. Believe it or not, this is almost done. You need a good 12 minutes with it, but no more than 20. After that you’re wasting it; you're boiling it down and concentrating it too much.

FL: Our 12 minute simmer is done, and this kombu dashi smells amazing. And you’re going to make a noodle bowl for us?

RL: Yes. We're using cooked soba noodles here; these are Japanese buckwheat noodles. Use whatever you have that’s easy. Use leftover spaghetti from your fridge. Use quick cook noodles, like rice noodles, that you can make in just a second by pouring boiling water over them. It doesn't have to be this big, elaborate thing. It should make you happy; it shouldn’t be work. I'm going right into this dashi pot while it's cooking. Look at that color! It’s that amber, root beer brown; it really is like a tea. Use a ladle to pour some of it over the noodles. We're going to garnish this with things I found around the kitchen, and you can do the same at home. It’s springtime right now, so we have some pea leaves. Of course, asparagus and spring are synonymous, so we have some freshly shaved asparagus; we'll get that into the dashi and let the heat lightly wilt them. Some edamame beans are essential. These are pickled mushrooms, which adds zing to it. And we have some tofu that has also been pickled with a little bit of turmeric and ginger. Look at that cool effect going on there.

FL: It almost looks like a little omelette square.

RL: There you go. We’ll call it tofu tamago! We’ll use some nori to finish it up, and our last little touch will be a pinch of sesame seeds.

RL: And there you have a bowl made from whatever you have lying around the house. That is a breakfast, lunch or dinner. It’s ready any time using with this stock that you took 15 minutes out your day to make that and you'll have around all week long.

FL: And you're going to feel fantastic. This looks delicious; I’m going to start slurping.

Francis Lam is the host of The Splendid Table. He is the former Eat columnist for The New York Times Magazine and is Editor-at-Large at Clarkson Potter. He graduated first in his class at the Culinary Institute of America and has written for numerous publications. Lam lives with his family in New York City.
Roasted Veggie Bowl with Green Goddess Dressing
Tinned Scallops and Kelp Pesto
Sheet Pan Chow Mein
Peanut Stew with Spinach and Miso