Chef Mike Solomonov has nothing but love for Philadelphia

by Francis Lam
Listen: Chef Mike Solomonov has nothing but love for Philadelphia
11:43 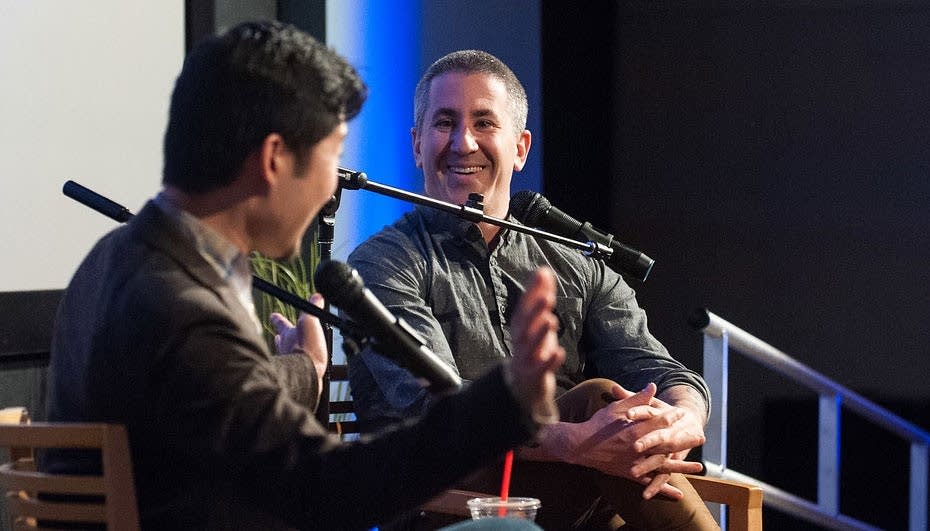 People who live in Philadelphia have known for a long time how amazing their city is when it comes to food. It’s only lately though that people outside of Philly have started to see it as a home of great chef talent. One of those amazing talents is Mike Solomonov, the Israeli-American chef-owner of Zahav, Federal Donuts, Rooster Soup Company, Goldies, Dizengoff, and Abe Fisher. Solomonov is also four-time James Beard Award winner, including Outstanding Chef in 2017 and Best Chef, Mid-Atlantic in 2011. If you think his resume is impressive, wait until you hear how passionately he spoke to Francis Lam about his love and admiration for Philadelphia, the city he calls home after being born in Israel and growing up in Pittsburgh.

Francis Lam: You are the chef and owner of Zahav, and you are known literally around the world as one of the great voices of Israeli-American cooking. People treat you like an ambassador; they call you when they want to know something about a place that's 6,000 miles from here. But I want to talk to you about something that's a little closer, and the fact that I read an article that said you are constantly turning down offers to opens Zahavs elsewhere. The reason you gave was, "Making money sounds great. But I like when people come to Philadelphia to have dinner."

FL: What does that mean?

MS: Here in Philly we are often overshadowed or have been overshadowed in the past by D.C. and New York. I love being in the restaurant. I love cooking at the restaurant. I love greeting people. I love the fact that we have people that travel to Philly to have dinner. And that is such a switch. I think at one point if you wanted to cook, if you wanted to eat fine food, you had to go to New York.

I am not from here. I've been in Philly for 17 years. I definitely feel like it's my home. I feel like in the last decade or two it has gone through this transformation and it's just an amazing place to do business. It's an amazing place to raise a family. It's got a small time, small town charm to it. I feel like you just don't get it -- or you wouldn't expect it -- in a city of this size.

MS: And it's great to be a part of it. It's great to be able to innovate. And, you know, of course, opening a Zahav in New York would be like the most obvious thing in the world. But we made a lot of mistakes when we opened, and our community gave us a lot of passes to try to figure out what it is that we had to do. Getting national or international acclaim for a restaurant, an Israeli restaurant, in eastern Pennsylvania in this city--to get it we needed a period of growth. And we got that from Philadelphia.

FL: Let's talk about the fact that you came 17 years ago. You had started cooking in Israel. You came back the United States. You went to culinary school in Florida, I believe. What did you expect to see from the culinary world here at that time and what did you see?

MS: I was literally on the way to New York and I was going to go work at Le Cirque or Daniel or something like that. And I was here, and I knew Le Bec-Fin was here and the Four Seasons -- I think Jean-Marie Lacroix was the chef there, and that was kind of a big deal. But I didn't know that there was anything else. And I had dinner at Brasserie Perrier. I had bites at Susanna Foo. And then I ate a little bit of striped bass. I just didn't expect that level of sophistication at all. Philly just seemed, pragmatically speaking, an easier place to live than New York. I was prepared to go live in the Bronx with seven other line cooks, live in a closet, and make 10 dollars an hour. I thought I'd work at Le Cirque for a few years, then go to France and stage for one year, then come back and open a restaurant and that would be it. That's obviously not what happened. And luckily, I got stuck here. I worked at Striped Bass for a year and at Vetri for almost three years. And then, my business partner, Steve Cook -- who was a finance guy in New York -- came to Philly, opened a restaurant, a BYOB in West Philly called Marigold Kitchen; he hired me to be the chef and that was in 2005. That's kind of how it went.

FL: I love the murmurs in the crowd when you mentioned Marigold Kitchen.

MS: It's still an excellent restaurant. I haven't been there since we sold it because I feel like I would go in there and ugly cry. But it was an amazing place; that was the thing. Steve came back, had a few years of restaurant experience, bought this 40-seat BYOB in West Philly and made it work. You just don't have the luxury of doing that in a lot of huge cities.

I remember when I took the job there, it was like... the restaurant is 100 years old or something. At that time there was a stipulation from the landlord that there are boarders that would live upstairs on the second floor, and they had to stay there. So, we'd be in the middle of dinner service, and a guy would come downstairs with his bike or come in with a dog. They would order pizza to the vestibule of the restaurant, walk through the restaurant, and take it upstairs. It was seriously like a haunted house! On the third floor, we had this water bath with an immersion circulator and there was only one light that worked in this one room that had all these doll heads and stuff.

MS: So, there would be lamb shoulders sous-viding upstairs for 36 hours, there would be boarders with pets and bikes and pizza delivery on the second floor, and then we had a BYOB on the first floor. It was really amazing and sort of indicative of the way that people think here. You can be really creative here because the stakes are not as crazy. You don't need to raise 30 million dollars or whatever to open a new restaurant and try it out.

I think that people started to realize that it's a very easy city to live in; there was a sort of energy and this growth and vibrancy. In the spirit of celebrating the American city, people are now accepting of things. It became a lot less segregated, and younger people started moving back. I'm not sure when this happened, but Penn became the largest employer in Philadelphia. And so, academia and medicine have been really charging a lot of the growth.

I live a block away from Zahav. I live four blocks away from my oldest son's public school and four blocks away from my son's preschool. And you can just do that here. It's not that difficult. It's amazing and it's beautiful. And from the restaurant perspective, there are people that were interested. This is not an unsophisticated town. People are pretty open about telling you their constructive criticism. The velocity in which you receive it, especially amongst the Israeli population in your Israeli restaurant -- [laughs]. Zahav's an open kitchen and I usually work at the pass. We have Israeli moms coming up to the pass all the time telling me what I'm doing is wrong. And they love it; they still stay. And I kiss them on the cheek and all that. But they told me all the time what sucks.

FL: But in a world where all your customers are your neighbors, they're like aunties. It's cool. That's what aunties are for!

MS: They're totally critical, but they're like my family. Even when they're giving you a compliment it sounds like they're yelling at you. But I think it's I think it's wonderful. I think you should move to Philly, dude. That's the responsibility of Philadelphians now. It's like anybody that you know that lives in a different city -- especially if they want to have a family -- I'm like, "You need to move back." That's what happens. It's lovely here because there's so much history, so much progression, so much vibrancy, and you can walk down the street. I love the city of New York, I love the island of Manhattan. It is unbelievable, but it is impossible to go through the Lincoln or Holland tunnel without 1,000 dollars just pouring out of your pocket. Like, I ate freaking hot dog and I'm somehow down 1,200 bucks! That's not how it happens.

Come and stay with us, Francis. You'll love it. Come and hang with us. Come and stay for a couple of weekends. Come and walk through Spruce Street Harbor Park, or go to The Barnes, or run Kelly Drive. Do you run?

FL: Well, thank you. I was fishing for a compliment right there.

MS: Come and do it and we'll run the Rocky Steps, and then we'll go to the beautiful Philadelphia Museum of Art directly behind the Rocky Steps. We'll walk through Fairmount Park. Come hang out for the Fringe Festival. Feel and breathe the city for one week. And I'm telling you, you're going to want to move here.

FL: This was not where I thought this is going to go. I thought I was going to talk to you about restaurants; now, all of a sudden, I'm talking to the world's best real estate agent.

MS: I know. I have a great property for you -- no, seriously.

Francis Lam is the host of The Splendid Table. He is the former Eat columnist for The New York Times Magazine and is Editor-at-Large at Clarkson Potter. He graduated first in his class at the Culinary Institute of America and has written for numerous publications. Lam lives with his family in New York City.
Roasted Veggie Bowl with Green Goddess Dressing
Tinned Scallops and Kelp Pesto
Sheet Pan Chow Mein
Peanut Stew with Spinach and Miso