Building a terrific taco with Wesley Avila of Guerrilla Tacos 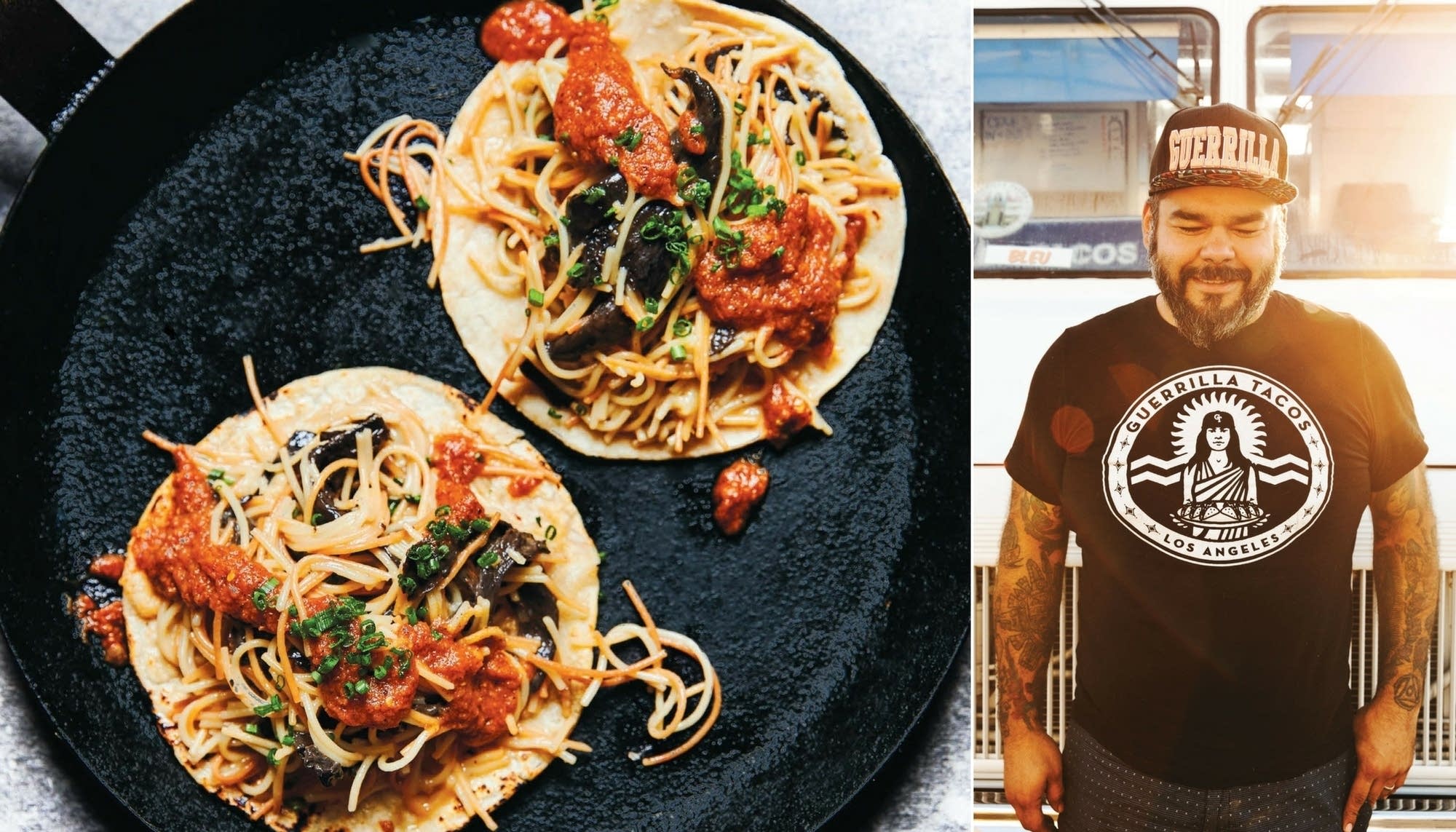 Wesley Avila was a forklift driver who became a fine dining chef, then started Guerilla Tacos, a taco truck that has been called the best in Los Angeles. He is also author of a book by the same name, Guerilla Tacos: Recipes from the Streets of L.A. His approach to making tacos isn't so much about tradition; it's about making delicious tacos out of anything. However, Avila is not a total anarchist. As he explained to our contributor Russ Parson, there are rules to making great tacos. Try Avila’s recipe for Sweet Potato Tacos topped with homemade almond salsa. He also shared his recipes for Arbol Salsa and Roasted Tomatillo Salsa.

Russ Parsons: Everybody loves tacos, but I think for a lot of people it’s still something you go out and buy rather than something you make at home. Let’s go over the basics. What are the things you should have on hand and ready to go when you start?

Wes Avila: It starts with great tortillas, either flour or corn. And some kind of fat – whether it be butter, lard, or a nice olive oil – to keep the tortillas warm. I warm mine up with a little bit of butter because growing up in southern California, we grew up eating tortillas with butter. Even on the taco truck, I tend to use a lot of butter on my tortillas. And then either tomatoes or tomatillos to make some kind of salsa. There are variables with chiles – dried or fresh. You want some garlic, shallot, or onion. Whatever kind of filling you’d like: some kind of fish, protein, meat, pork, vegetables. And cilantro or parsley. That’s pretty much the base to all tacos: a nice filling, good tortillas, solid salsa, and some kind of acid/herb thing going on.

RP: What are the steps and construction?

WA: You have your tortillas ready to go. Those take about a minute to warm up, so we don’t have to worry about that until later. We start with the salsa, and you can even do this ahead of time. Tomatoes or tomatillos, roasted or raw, boiled, simmered – you can do them a lot of different ways. There’s many ways to do a lot of different salsa. The way I like to do it is roasting them over fire. So, if you have an open fire pit – perfect! But not many people have an open fire pit; you can do a makeshift one in your apartment or house with a little grate over your fire burner. You want to get some nice color on your tomatoes, onions, and serrano.

If you can’t get fresh chiles, you can always order dried chiles. You can order guajillo or chile de árbol. But you need to be careful with chile de árbol or the smaller spicier ones, because when you start roasting inside your house, you’ll see what it’s like to grow up in a house here in southern California. Growing up, my mom would make chile de árbol by roasting them with a little bit of lard. We’d be such dramatic little kids; it’d be like pepper spray in the house, and we’d have to kneel down and go through the kitchen because it was too spicy. We’d be coughing up a storm and our eyes would be watering. Just be careful when roasting those.

We roast all our stuff until you got a nice char on them. Pop them in the blender with salt and some kind of acid, whether it be fresh lime or white vinegar.

RP: You’ve got the salsa made. What are the steps of construction?

WA: After that, decide what kind of protein to use – if we’re going to use shrimp, a thin-cut steak like a skirt steak, or pork. Or maybe we’ll just have vegetables. I would say to cook them al gusto, how you want to cook them. Perhaps roasted carrots or potatoes that have been cooked, then reheated with butter and thyme. If it’s something that has to be cooked to order – like shrimp or a piece of fish – cook it as you would. Put it on a plate to rest.

As it’s resting, we warm up our tortillas, which you can do a couple different ways. Warm them up right over fire, and it adds a nice slight char. Give them quick flips, as opposed to letting them stay on there and letting it burn onto your grill. But if you have cast iron pan over medium or medium-low heat, put a little butter, put the tortilla down until it puffs up slightly, then give it a flip. Now we have our warm tortilla. Typically, I’ll put a plate in the microwave for 30 seconds so it stays warm. That way, when I put the tortilla down, the tortilla doesn’t get cold instantly.

RP: Let’s go a little bit deeper into the qualities of a great taco. What are the contrasting and complementary tastes and textures everybody should know? What should every great taco have in it?

WA: There are some key points: a warm tortilla, a nice savory filling, and – for me – it’s got to have enough heft to it. If you’re going to have something that’s lighter, like a light fish, it’s got to have butter. If it’s going to be vegetables like asparagus, the salsa needs to be richer – like an almond or pumpkin seed salsa. Speaking of the salsa, it should have some spice. For me, I don’t like bland food. I like food that’s nuanced and restrained with purpose. But if you’re doing tacos, I feel it should be spicy, savory, crunchy, and have some fresh herbs. With any combination of ingredients, as long as it has those things, you’re on the right track.

RP: The tacos you make at Guerilla Tacos are essentially fine dining. What are your favorite tacos to make at home?

WA: My favorite tacos to make at home are the ones where you take yesterday’s dinner and make today’s lunch. For instance, I had sausages from the Alpine Village left over from a barbecue. These are German sausages – German brats, Bavarian weisswurst – already cooked and ready to go. I chop them up, mix them with onion and serrano chile, and sauté that together. Warm up some tortillas and add any salsa I have. The salsa I would normally have at the house would be something like adobo chile or a roasted tomato chile. We do a raw tomatillo salsa, but that’s better used in one to two days. When you have a raw salsa – it’s like a gazpacho or any kind of fresh thing – you want to have it when it’s bright and fresh. The roasted ones tend to last for about a week, even two weeks, if they’re really spicy.

Russ Parsons was the food editor and columnist of the Los Angeles Times for more than 25 years. He is the author of the cookbooks How to Read a French Fry and How to Pick a Peach. He is a member of the James Beard Foundation’s Who’s Who of Food and Beverage in America, and has won awards from the International Association of Culinary Professionals, the Association of Food Journalists and the James Beard Foundation.
Lake Prespa Baked Mushrooms
Salsicce e Peperoni in Padella (Skillet Sausage and Peppers)
Fiesta Turkey with Chorizo and Cashew Stuffing
Savory Thumbprint Cookies with Cream Cheese & Pepper Jelly