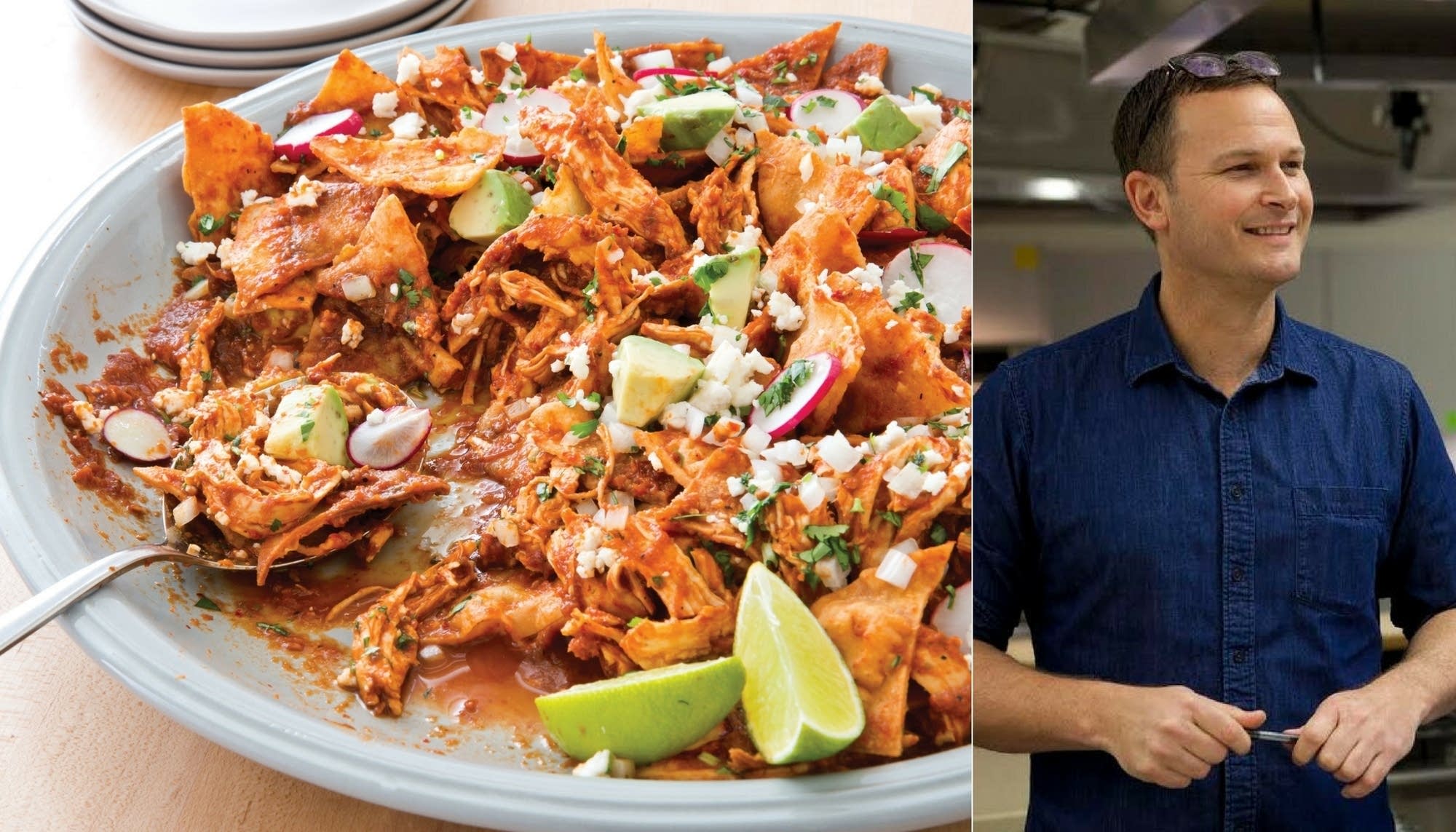 Chilaquiles is a delicious dish highlighted by a spicy pepper sauce with the texture and corn flavor of crispy homemade tortilla chips. It’s essential to use chips substantial enough to stand up to being stirred into the thick sauce – which means store-bought versions are not ideal. Managing Producer Sally Swift talks with Tucker Shaw, from America’s Test Kitchen, about the best way to get the perfect chip to finish the recipe for Chicken Chilaquiles.

Sally Swift: I want to talk about a dish that I don't know very much about – chilaquiles. Will you describe it?

Tucker Shaw: Chilaquiles is sort of a stew built on dried chilies and tomatoes or tomatillos; maybe with some chicken and eggs. The essential ingredient is tortilla chips which you stir into the stew to soften; the chips give it a lovely deep corn flavor. But if you haven't done it before, it's an unusual way to use your chips.

SS: What are the origins? Is this dish Mexican or Tex-Mex?

TS: It’s all of the above and then some. Tortillas pre-date Europeans arriving in North America. I think most dishes that are primarily built on tortillas certainly have roots farther back than the Spanish arrival. I would venture to say this dish – or a similar close cousin to it – is probably older than even the idea of Mexico.

SS: Wow! That's something to wrap your head around. The chips – because they are so seminal in this dish – can go bad in a lot of ways. What did you decide about chips?

TS: It can go south for sure.  Because the main function of the chips here is to add some bulk and deep roasted corn flavor, you want chips that don't introduce too many other things – like salt – and that also maintain their integrity after a little bit of time in that sauce. In other words, they should soften but shouldn't get to soggy.

SS: Seem like store-bought chips aren't going to work perfectly in this dish. Is that what you discovered?

SS: Did you deep fry them?

TS: That's one way you could do it. We used the oven instead because what you're looking for isn't a shatteringly crisp chip, you just want something that's toasted and has a bit of crunch to it before it goes into the dish. Take corn tortillas, cut them into triangles, toss them with oil, and bake them in the oven for 15 or 20 minutes – until they're crisp. The hard part is not eating all the chips but to set them aside to use in your dish later.

SS: The chips are ready. Talk to us about the sauce.

TS: We build our sauce on dried chiles. The primary flavor here is dried guajillo chiles, which you can find in most grocery stores. Dried chilies are some of my favorite underused ingredients from the grocery store. Guajillos are beautiful deep red – almost jewel-toned – dried peppers. You toss them dry into a Dutch oven to toast them for a few minutes. That period of heating them over a dry heat blooms their flavor and releases some of the oils; it gives you a strong, deep flavor base.

SS: That is a classic Mexican technique that you can use anywhere.

TS: It’s so good. Then you take the peppers out and drop them in a blender with fresh jalapeños and fresh poblanos. Using the three different peppers gives you a wide range of pepper flavors all at once. You get fruity and heat with all these redolent, beautiful expressions of peppers. Toss in canned tomatoes, onion, garlic, and cilantro. Blitz it until it's smooth. Return that to the Dutch oven and start heating it up. Because we make our chilaquiles with chicken in this recipe, you drop in a couple of chicken breasts and let them poach for a while. This probably takes about 15 minutes.

SS: The chicken is cooking in the sauce?

TS: That's right. You don't have to cook the chicken ahead of time; you poach it in the sauce. Yank those out when they're done, put them aside, and start to reduce the sauce. It will be a little bit thinner than what you're looking for in a final dish. In the end, you want a sauce that will stick to your fork.

While that sauce reduces, shred the chicken using a couple of forks to pull it apart, then stir it back into the sauce. Here you are with this beautiful chile sauce with tomatoes, onion, garlic, and chicken. And you've got a tray full of tortilla chips that you've made. This will feel strange if you've never done it before, but now you need to drop the chips into the sauce and stir them in.

Cover the dish and let it sit anywhere from 2 to 5 minutes. Some people like their chips in chilaquiles to maintain an al dente-ness – for lack of a better word; other people like them a little bit softer. Either way, you want to leave them in there long enough so that they don't come out shatteringly crisp and they distribute that deep corn flavor throughout your sauce.

SS: This is when I can understand why a store-bought chip would not work because they would just disintegrate.

TS: Yeah, they would fall apart. Save them for the guacamole and salsa. Then, to finish off the dish, you load it up with cilantro, queso fresco, maybe some sliced radishes.