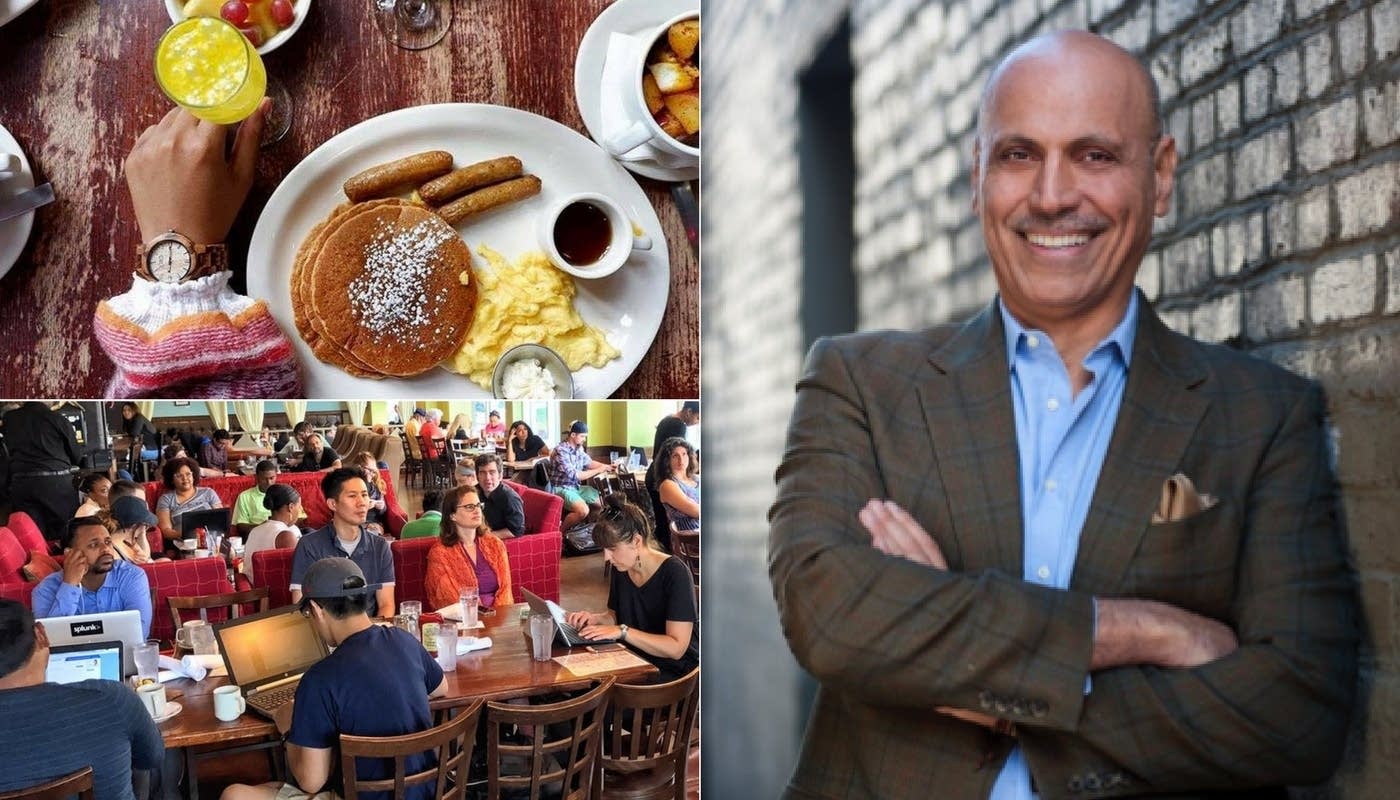 Back in 1964, The Civil Rights Act legally desegregated restaurants. But over 50 year later, Washington, DC-area restaurant critic Todd Kliman observed that in visiting many restaurants in the city for his work, he often only saw white people dining. He set about asking why – why, when restaurants are desegregated by law, are they still not really integrated in his observation? He asked chefs, restaurant owners, managers, and no one would talk to him on record, except Andy Shallal. He is the owner of the restaurant chain called Busboys and Poets, whose purpose is to bring together guests of all races. Francis Lam talked with Shallal about his push to make his restaurants more accessible to all diners. [Ed. Note: Todd Kliman’s article, “Coding and Decoding Dinner,” was published by Oxford American.]

Francis Lam: I think it's probably charged to talk about restaurants as being segregated or integrated, but, in reality, the fact is when you look around most restaurant dining rooms, you rarely see a mix of different races. You've decided that, in your restaurants, a racially mixed crowd is exactly what you want. But it's not a simple as saying, "We're open. Everyone's welcome. Come on in." Because people tend to gravitate towards places that they feel comfortable in, and for whatever reason, not everyone finds the same places comfortable. What are some of the choices that you've made to appeal to diners of different races?

Andy Shallal: There's a big history in America about segregated restaurants. I remember growing up here and seeing the footage on television of the Woolworth counters and the amount of violence that went into that. I always wondered what is it that makes people so angry about someone that's different from them dining next to them? That was always fascinating to me to see it in America. I come from Iraq. I'm a brown person; I don't identify as black or white. For me, it was always this sort of strange puzzle that America is unable to come to grips with. When I see restaurants, I see them as a common ground that people can come to and be able to work through the racial differences by sitting together and breaking bread together.

FL: How do you make that happen?

AS: You have to look at the things that keep people away. There are so many untold symbols out there, things that you experience as a diner when you go out to eat. All of us know when we go out to eat, we have a good experience or bad experience; sometimes we can't pinpoint why one experience was good and one wasn't. If you are to dissect those pieces, you start looking at the staff, the way you were greeted, where you were seated. You start looking at the type of food you were served, who served you, how was it served. These are touchpoints I think restaurants have that, oftentimes, have been ignored or left just to happen; we have a very strong intention about how those things happen.

For instance, let’s say you have an empty restaurant on a Saturday morning. You just opened the door, and there's no one in the entire restaurant. A black couple comes in. If you take them all the way to the back and seat them in the corner – which happens to be the nicest table in the restaurant – the couple might think, "Why are you putting me back here? Why are you putting me in the back corner?" On the other hand, if you have a white couple that comes in, and you seat them in the back corner, they're thinking they have a nice little, private space all to themselves. The experiences are so different depending on what background we come from.

We train our staff to be aware of those things, not necessarily seat people in opposite places, but actually be aware of it. When you're seating people who may interpret a certain type of seating to be discriminatory, have a conversation with them, and ask, "Where would you like to sit?" There's other instances. Let’s say you have a black hostess, and a black couple walks in. Right behind them is a white couple. The black hostess immediately goes to the black couple, and she says, "How are y'all doing? Come on in!" and she takes them and seats them. Then, she goes back to the white couple, and she says, "Two? Right this way." Suddenly, the white couple feels like they're left out. We train with the idea that we are in a racial society, that race matters in America today, and because of that, we don't pretend like it's invisible. We don't pretend like it's not there. We deal with it head-on.

FL: You mention in Todd Kliman’s article that there are other issues, too, like things that might be a little more invisible – things like how your menu is written. Can you talk about that?

AS: When we moved into an area that was gentrifying, we wanted to make sure that people that have lived there are still going to stay and not feel like they're being pushed out – not only by the high costs of rent and living, but also by the type of places that are coming in and what kind of signals they send. And we wanted to make sure that we're not coming in with arugula this and foam that, and a sauce that I don't want to call buerre blanc when it could be just a “lemon butter sauce.” Those types of things make a difference in how you connect with folks that may not be familiar with the more modern cuisine or the fancier names that we've given to dishes that may be really simple. We just make them fancy and charge a lot more for them. That's usually how it works.

We want to make sure that our menu is accessible to as many people as possible. We are looking at not only racial diversity; we're looking for economic diversity. We're looking for people that are students, that are elderly, that have lived here for a long time and are on limited incomes. We try to accommodate as many people as possible and create a menu that is very accessible; you don't have to be embarrassed to pronounce something if you don't know how to say it exactly. You know what I mean? I think, a lot of times, when you have those types of menus, they tend to be intimidating, and people don't go there because they don't want to be embarrassed in front of friends or in front of the waiter.

FL: How successful do you think you are?

AS: I think we're successful. We have been now in business at Busboys and Poets for more than 12 years, and despite all the changes that are happening around us – the city is gentrifying by breakneck speed – we still maintain one of the most diverse type of gathering places in the entire city. We are fortunate in the fact that people still find us to be that safe space. What gives me hope and a sense of wanting to continue this is how many people tell us how much they love this kind of atmosphere, and ask, "Why isn't it more prevalent?" That's really encouraging because, deep down inside, I think people want to mix. They don't want to segregate, but because it's more comfortable to segregate, they do. When they see how it could be, they are thrilled and excited about it; they're a lot more hopeful and positive about it.