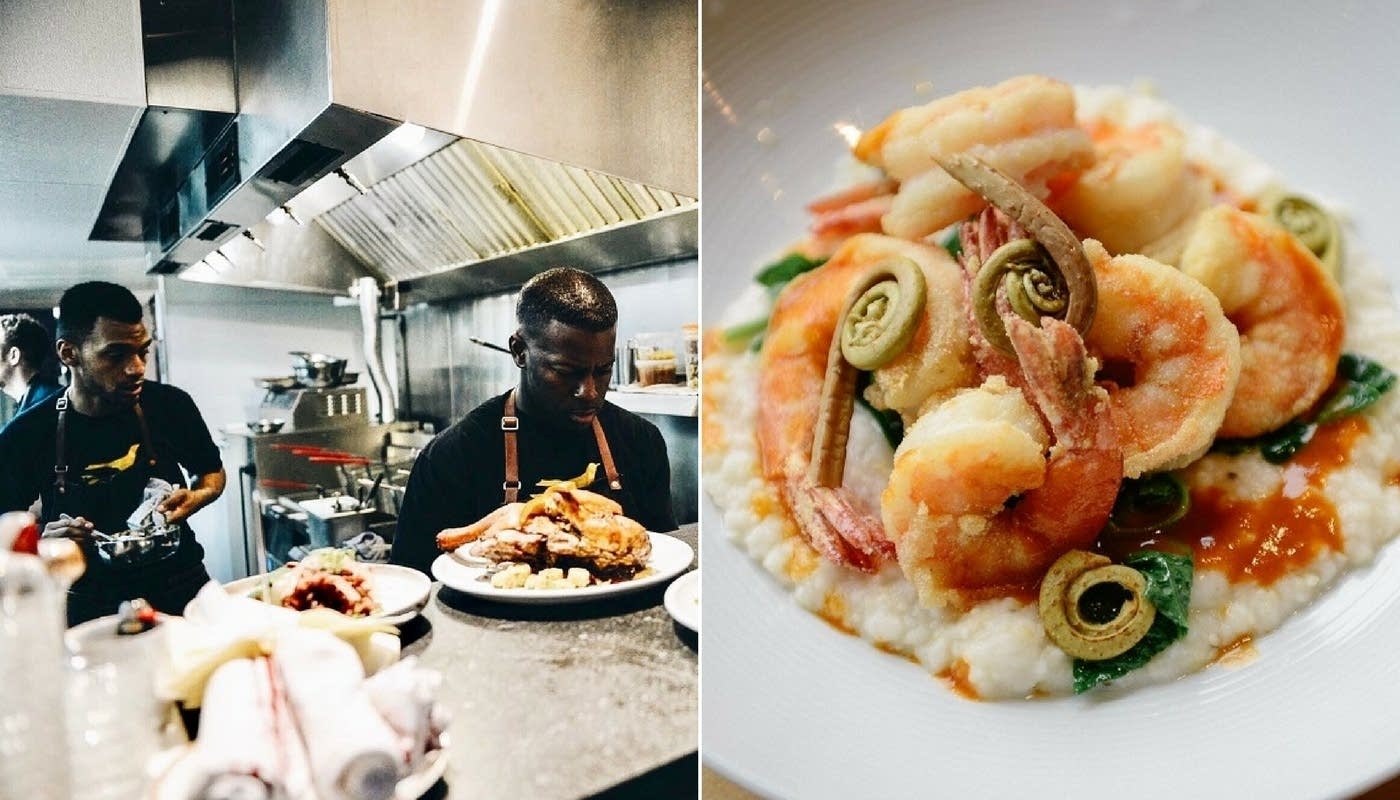 Having grown up in Florida with a family that hails from Georgia, chef Edouardo Jordan has a culinary foundation deeply rooted in Southern home cooking. He's also a classically trained chef who graduated with honors from Le Cordon Bleu (Orlando) before working in the kitchens of many world-class restaurants on both the East and West Coast. He is now the chef/owner of two restaurants in the Seattle area. His first restaurant, Salare, presents dishes influenced by the cusines of Italy, Africa and the Caribbean. With his new restaurant, Junebaby, Jordan takes Southern food to a new level, highlighting Southern ingredients and tradition. Jordan talked with host Francis Lam about his mission to break the cultural stereotypes of Southern food, what his own research into Southern cooking taught him, and what it means to present Southern cuisine in the opposite corner of the country.

Francis Lam: I want to start by talking about something I saw on the Junebaby website. Right there, next to your hours and menu, there is a statement about stereotypes. There's a mention of Aunt Jemima as a stereotypical black character, and there's a mention of the people from Atchafalaya often being stereotyped. Obviously, this is an issue that's on your mind, the stereotyping of Southern food. What are some of the stereotypes of Southern food that you see?

Edouardo Jordan: A lot of people quickly define Southern food with several ingredients: fried chicken, watermelon, and collard greens. Everything else in between is “Oh, it's heavy. If I eat too much, I'm going to gain weight,” and that is not true. That's not what Southern food is built on. Being in the Northwest, far away from the South, I knew that I needed to educate people about Southern food and what I'm actually trying to do with the restaurant.

FL: What are some of the things that surprise some of your guests who might not be steeped in Southern cuisine?

EJ: The diversity of the ingredients. I always go back to the staples and the backbone of Southern cuisine, which was built on a lot of West African ingredients and techniques. We're talking about bringing in the rice, peas, root vegetables, collard greens and various leafy greens. I'm educating people on those ingredients.

FL: Obviously, you're talking about history. You're not just talking about rice and peas, but you're talking about, "I want to feature rice and peas because this is the food that fed the enslaved, and that's the backbone of our country and our history." You grew up in Florida, and your family's from Georgia. But you did a lot of research to open the restaurant. You traveled. What were things that surprised you most in your research about the cuisine that you didn't know about?

EJ: The diversity of Southern food throughout America. I think the easiest way to look at it is, we’re always comparing European cuisine to our cuisine, and how Italian cuisine, you go to Sicily and you get this beautiful ingredient, and you go to Parma and you get this beautiful ingredient, and how each of those regions of some European country is so steeped and so beautiful. That same outlook can be looked at in the South, because you go to Kentucky you're going to get slightly different than what you would get in Tennessee. You're going to get something slightly different in North Carolina than what you're going to get in South Carolina. What is grown and the way something is cooked in Georgia is going to be slightly different than what's grown in Florida. One of the most beautiful things for me to experience is all the diversity, all the different characters, all the different growing regions throughout the South and what they're focusing on, from the smoke camps to bacon to various produce, and then you can get into the barbecue belts and that's a whole other story on its own.

FL: Let me ask you one more question about your menu. It's actually not about the menu, it's about you as a person, but I think your menu reflects that. I was surprised to see a few things on your menu. You have chitlins, neck bones, and a slice of watermelon. These are Southern items, for sure, but I think they're also items that a lot of people associate especially with black Southern food. I was surprised to see it because I was reading interviews with you in the past, and you said that you're a fine dining chef, and you're concerned about opening a Southern restaurant because you don't want to be pigeonholed as, frankly, just a black dude frying chicken. What changed to make you feel like you want to go all-in on cooking this food and representing it this way?

EJ: It started from my foundation, cooking with my mother and my grandmother. All that I knew was Southern cooking,-- big, family type of meals. Everyone at the table enjoying candied yams, rice and peas, smothered pork chops, and liver and onions That was my heart and soul. That's what made me think about the restaurant industry. Once I went to culinary school, it was French-based, and it was a whole new world for me, learning about these amazing restaurants around the country that are cooking cuisine that I had no clue about. It was an eye-opening experience. At that moment, I thought that was the route that I needed to go. I think that is the direction that most culinary students go, because that's what we're forced into from a culinary school standpoint; we're traditionally trained in French cuisine.

I worked with the best chefs in French and Italian restaurants. I gained a beautiful appreciation for the cuisine and the ingredients. As I was finding myself and finding my voice through my own first restaurant, Salare, I realized that I kept being drawn to the Southern aspect of my menu. I needed to become a voice in my community here in Seattle, because there wasn't anyone actually doing Southern food. I started questioning myself, “Why was I running away from Southern food?” It was because that was all that I knew. I also didn't want to become “the chef that opened a black restaurant because he's a black chef and that's what he's supposed to do." I wanted to bring another aspect to who I am and showcase myself as a chef. I trained to become a great chef. That's what I want to be recognized as: a great chef -- not a great Southern chef, not a great black chef, but a great chef. I didn't think hard about it, but it did come into play later on down the line. I shouldn't open up a Southern restaurant first, and later on down the line, thought about it. I'm glad I didn't, because it opened up the door for me to have a bigger voice in the culinary industry right now.