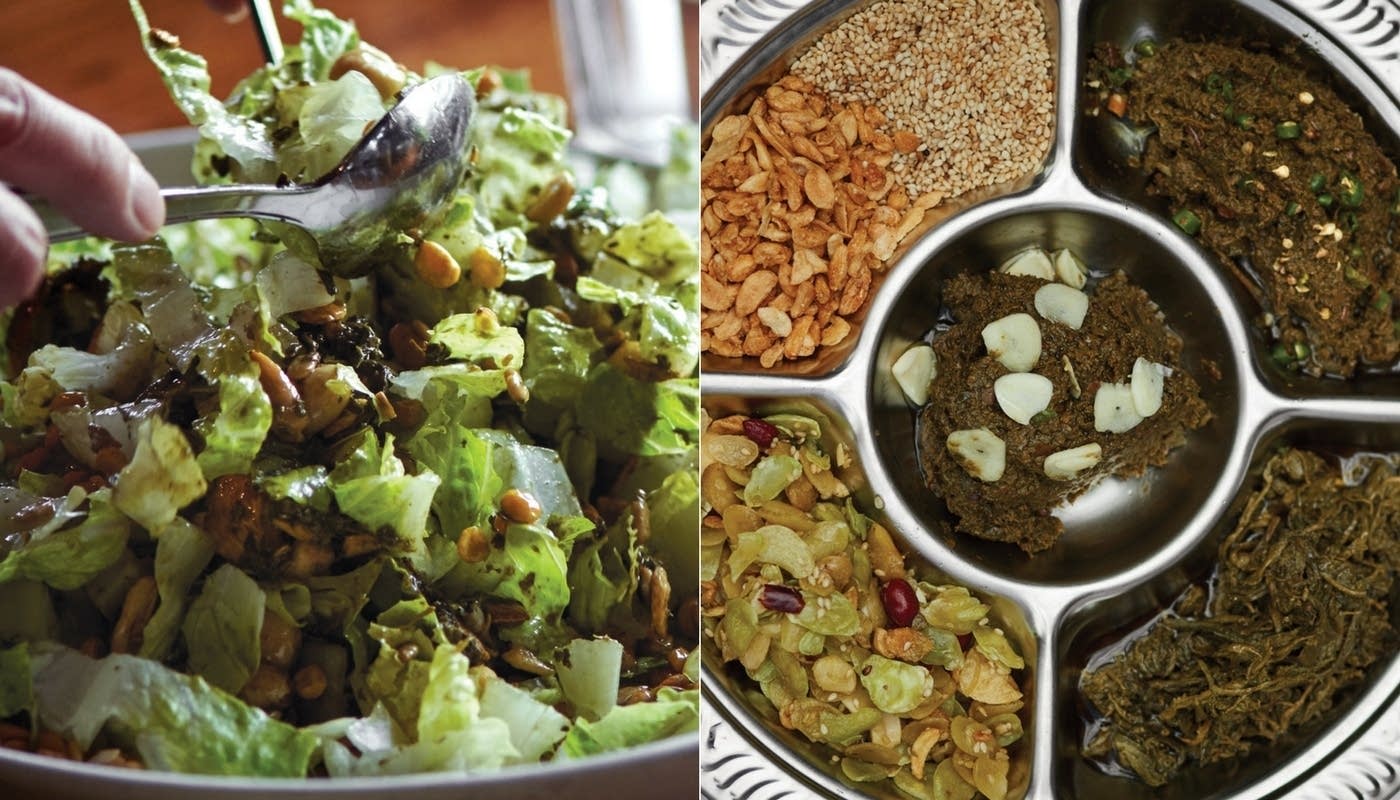 When it comes to international cuisines that Americans know far too little about, Burmese food likely sits high on the list. Part of it is political. Now called Myanmar, the country was closed off to much of the world until just a couple years ago, and there aren’t many Burmese communities in the US. Burmese food itself is related to the foods of Thailand, China, and India. Burmesian restaurateur Desmond Tan and food writer Kate Leahy have released a new Burmese cookbook, Burma Superstar, named after Desmond’s Bay Area restaurant. Our contributor Melissa Clark talked with Desmond and Kate about what makes Burmese food unique. Enjoy their recipe for Tea Leaf Salad, served with a tea leaf dressing and tossed with delicious accompaniments like fried garlic chips and yellow split peas.

Melissa Clark: Here in the United States, we're not that familiar with Burmese food. Can you tell us a about it?

Desmond Tan: If you've had Burmese food, it may remind you of Thai food. Certain dishes might remind you of Chinese food or Indian food. Because it borders those countries: Thailand, China, India. We get the spices from those three countries. At the same time, there are Burmese dishes that are uniquely Burmesian that you can't get anywhere else. It's spicy, salty and sour. Versus Thai food, where you might have sour, spicy and sweet.

MC: Kate, before you started working on the book, did you know anything about Burmese cuisine, or did you learn it all while studying with Desmond?

Kate Leahy: I learned it all on the job. I went into the Burma Superstar kitchen with a notebook, and my first day there they thought I was the health department. But they quickly warmed up to me. I was talking to the cooks and having them show me how to make the different dishes. The first day on the job, Desmond said, "We don't have any recipes written down," and I thought, "There's no recipes? I'm starting from scratch?" It was quite an experience.

MC: One of the things that I read from your book is that, in Burma people don't just drink tea, they eat tea. Which is something that I don't think anyone else in the world does – or maybe not in many places.

DT: It's true. It's a fermented tea, and we use that as a dressing to create a tea leaf salad. We also use the very umami fermented tea to steam fish and other dishes. One of the dishes we do in the restaurant, we take any fish – say raw cod – and we wrap it with banana leaf. We spread the tea leaf, scallions and lemon; we steam it for about 18 minutes, and it's a delicious, healthy fish dish. The tea leaf salad and other ways of eating the fermented tea leaf are to be eaten as a snack.

MC: Kate, can you describe what fermented tea leaves taste like? Both by themselves, and then also in a dish?

KL: The first thing you notice, especially if you're seeing the whole leaf when its fermented before it's been mixed with other flavors, is it has this ripe smell – almost like an overripe mango with a funkiness. The funkiness reminds me of bamboo. You have that combination, and it's unlike anything I've tried before. The leaf itself, when it's just fermented, it's also extremely bitter. You need to soak it and season it before it becomes this umami-rich snack or dressing. It is a unique flavor; it doesn't remind me of green tea. The flavors of bamboo come to mind, and it pairs well with things like fish sauce because it has that funk.

MC: Did you take the green tea leaves and do anything interesting – have a new take on them – for the book? Or is it traditional?

KL: It was traditional. It’s still such a new idea that doing too many things with it – putting spins on it – would take away from the tea leaf itself and how popular the salad is. People love it in a salad. I know Desmond's done some cool things with it at the restaurant; they've mixed it with an aioli to make a "teaoli." But for the book, I kept it traditional.

I will say that in Myanmar, when it's a special occasion and you're presented with the tea leaf, it's not in a salad. Oftentimes it's in a lacquerware container where there are beautiful tea leaves with fried bits of garlic, toasted sesame seeds, and toasted peanuts; you can pick and choose what you want to eat with those tea leaves. Those would be the highest end tea leaf – or lapet, as they say in Myanmar.

MC: Is there another recipe from the cookbook that speaks to Burmese cuisine?

KL: Mohinga is definitely the one that comes to mind because everywhere you go in Yangon, you see mohinga. Desmond, it's still one of your favorite Burmese dishes?

DT: Absolutely. It's also my daughter's favorite. It is a slow cooked stew, a soup-like dish. We use catfish and cook it for 2 to 3 hours until all the fish are broken apart and use that as a base.

KL: It's almost the Burmese answer to pho or any kind of brothy soup that you would have in Southeast Asia; but it's specific to Myanmar because it has this depth of flavor from the catfish, and it has rice noodles. It's also thickened sometimes with ground rice and other times with chickpea flour. I find that's another cool thing about Burmese food – they use a lot of different ways to thicken soups, like using chickpea flour to thicken a broth. Oftentimes this seems so modern to me, but they've been doing it for centuries.

KL: That was something I grappled with when I was writing the book, because the country was going through so many changes. We started researching it in 2014. In 2015, when we went on a couple of trips to do research, there was this important election. For the first time, there was a democratic election where the results weren't thrown out – the first time in a half-century. We thought, “What do we call this country?” Is it politically correct to use the modern phrase Myanmar, which the country – when it was ruled by a dictatorship – was using since 1989? Or do we stick with traditional Burma? There wasn't a right answer. I looked to see what more people were using. Once newspaper after newspaper switched over to Myanmar, we thought we’d talk about Burma when it was called Burma – because when Desmond was growing up there, it was still Burma. But when we go forward and through history to modern times, we use Myanmar.

DT: Everywhere else in the world, they're referring to Burma as Myanmar. I've always known Burma as Burma, and I don't have a preference. But I think Burma sounds much more cool than Myanmar.

Desmond Tan and Kate Leahy are the authors of the cookbook, Burma Superstar: Addictive Recipes from the Crossroads of Southeast Asia. Melissa Clark’s latest book is Dinner, Changing the Game.

Melissa Clark is a food writer, author, and host of our new podcast Weeknight Kitchen with Melissa Clark. She is a food columnist for The New York Times, and has written more than 30 cookbooks including Dinner in an Instant, Cook This Now, and In the Kitchen with a Good Appetite.
Egyptian Bread Pudding (Om Ali)
Direct Artisan Pizza Dough
Artisan Pizza
Breaded Pork Medallions With Mashed Potatoes and Gravy