Waste not, want not: cooking with scraps, wilt and weeds

by Melissa Clark
Listen: Waste not, want not: cooking with scraps, wilt and weeds
07:12 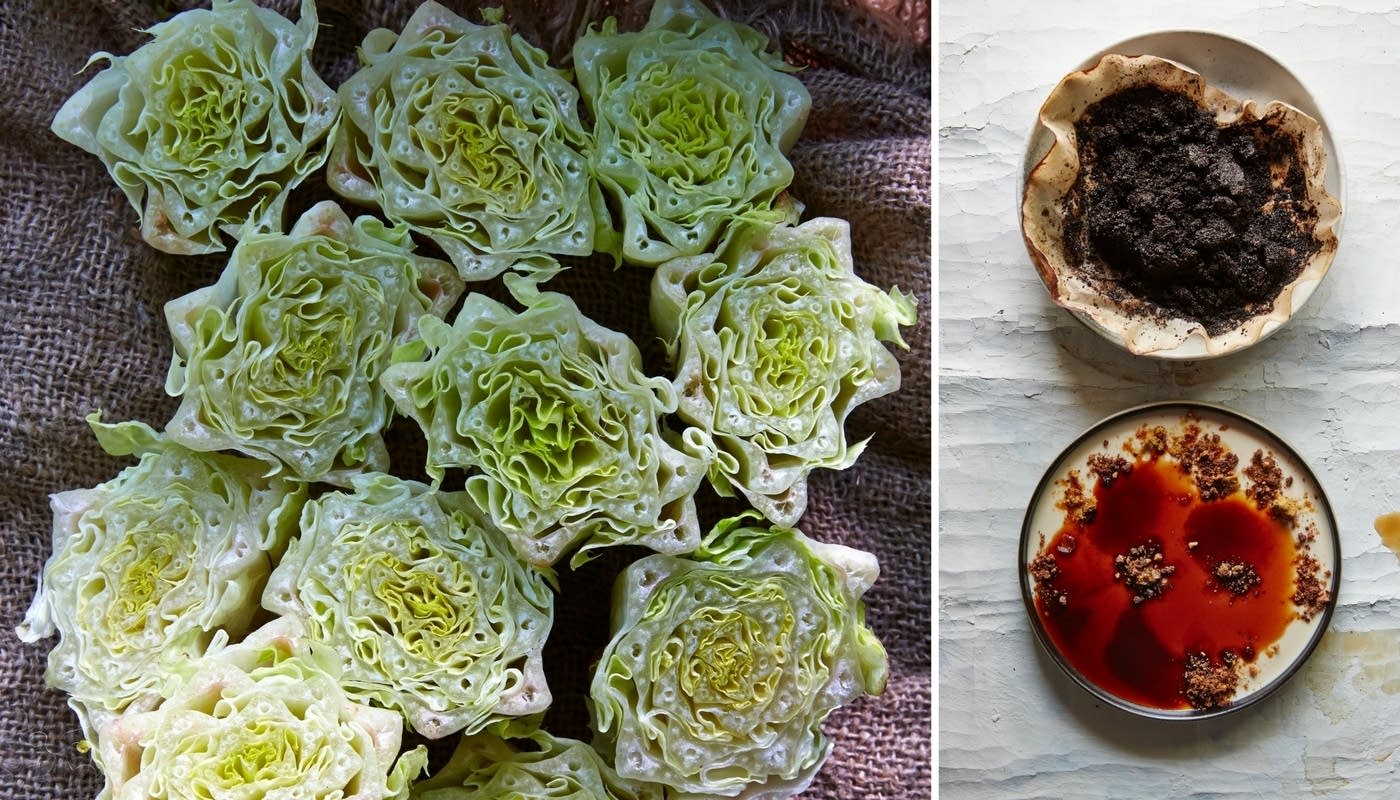 Wasted food is a major problem not only in the United States, but around the world. In their new cookbook Scraps, Wilt + Weeds, authors Mads Refslund (a chef) and Tama Matsuoka Wong (a home cook and forager) report that “40 percent of food grown in America goes uneaten… globally, 33 percent is unused… food waste is now the largest component of what goes into landfill and incinerators.” Refslund and Matsuoka Wong hope to change that by encouraging “trash cooking.” Contributor Melissa Clark talked with them about how to use the leftover scraps of popular ingredients to create main dishes, desserts, sauces, cocktails and more. Try their recipes for Seared Romained Lettuce Bottoms, Coffee Grounds Panna Cotta and Coffee Grounds Biscotti.

Melissa Clark: What is “trash cooking?”

Mads Refslund: All these roots, stems, scales from fish, fish eyes, fish heads. Whatever you can find being thrown away, we tested it. We did a lot of testing – and we threw a lot away – to come up with the final result. It was a process.

MC: It seems like you have to be a good cook and need a lot of culinary skill in order to properly cook trash.

MR: I don’t know if you need to be the most amazing chef to do this, but you have to be curious and not afraid of doing these things. You need to have a lot of patience, because it takes a while to come up with a good recipe. Of course, you have to know about normal skills in the kitchen, be creative and think out of the box.

TMW: I would disagree with Mads. Not being a chef myself, I don’t think you have to be a chef or have any culinary education – which I don’t. It’s not something we’ve just invented now. This is how people always cooked and ate. We stopped cooking that way because we get everything in little packages now. It’s also a cultural decision that some of it is already made for you by the time you go to the grocery store. There is also a personal decision that you decide something is bad or something is good. You don’t have to think that way, but it’s a decision that’s made at some level.

MC: In the book, you write that part of having the knowledge to do this is to see the foods in the fields before you bring them into the restaurant or your home kitchen. How is that helpful for people?

MR: It’s important to see the whole part. Let’s say you get a fish filet. You can never see how fresh it is. You can smell it, of course, but you can never look into the eyes of it and say, “This is really fresh.” Or a whole vegetable. If you don’t have the leaves around the cauliflower and it comes in plastic, you cannot see if it’s fresh; you cannot feel it.

MC: One of the foods you say has the most wasted parts is lettuce. Tell us about how we can use the whole thing.

TMW: I do have a funny story about romaine lettuce, which is one of the most commonly used lettuces. Mads was obsessed with getting the whole lettuce. He forced me to take him out to this farm where he told the farm to dig out the entire lettuce with the roots. Turns out the roots of the lettuce are very tiny things. To get a dish full of lettuce roots would require a huge amount of effort. After carting away huge crates full of lettuce with the roots, the farmer declined to do this anymore.

Mads was focused on the bottom parts of the lettuce. People usually cut off the tops and use that for their salads; they throw away the bottom part. He got into how delicious and amazing the bottoms were. He put them on the menu at the restaurant he was at at the time. The problem is they had all these leftover lettuce tops. They had too many of them and they were stacking up all over the kitchen. Then he came up wilted romaine lettuce tops that you can use if you’ve got too much wilted tops – because you made all the bottoms.

MC: Tell me about fish scales. For Americans, we do not think of eating those.

MR: You have to make it crispy, then it tastes like chips. As long as you put them in oil, it’s like popcorn in a way. Just make it with a little salt and vinegar to taste like sour onion chips. Americans like chips, so let’s make it into something like that.

TMW: There is a tradition in the bars in Japan where they serve crispy fried fish bones and scales as bar food.

MC: [laughing] I think if you fry anything, it becomes very delicious. People love to juice and use their juicers all the time. We throw out those juicing leftovers. What can we do with those?

MR: There’s so many things we can do. In the book, we use it for pancakes or use it for a flour. We dry it, blend it and you can use it in pancakes or for a veggie burger by taking all the scraps, mixing it up with eggs, and roasting it. We do falafel with it. We do different pastas with it. You can keep the pulp, dry it, and keep it in storage. When you need vegetable stock, take it, mix it into hot water and it will be like a dice of bouillon.

MR: When I used to work in this restaurant, we used it for panna cotta and for sauces. I thought it was important because all the waiters making coffee and every time they made cappuccino, they throw all the coffee grounds away. I said, “Instead of throwing it out, just take this bucket and throw it in there. I’ll use it for something.” We started using it for panna cotta with an infusion into milk and cream for a perfect dessert. We also started using it for dressings and infusing it into vinegars.

MR: You can use it in alcohol; just leave it there. The same with the coffee grinds. Put it into alcohol, vinegars, whatever you want, and it will take the flavor from the coffee.