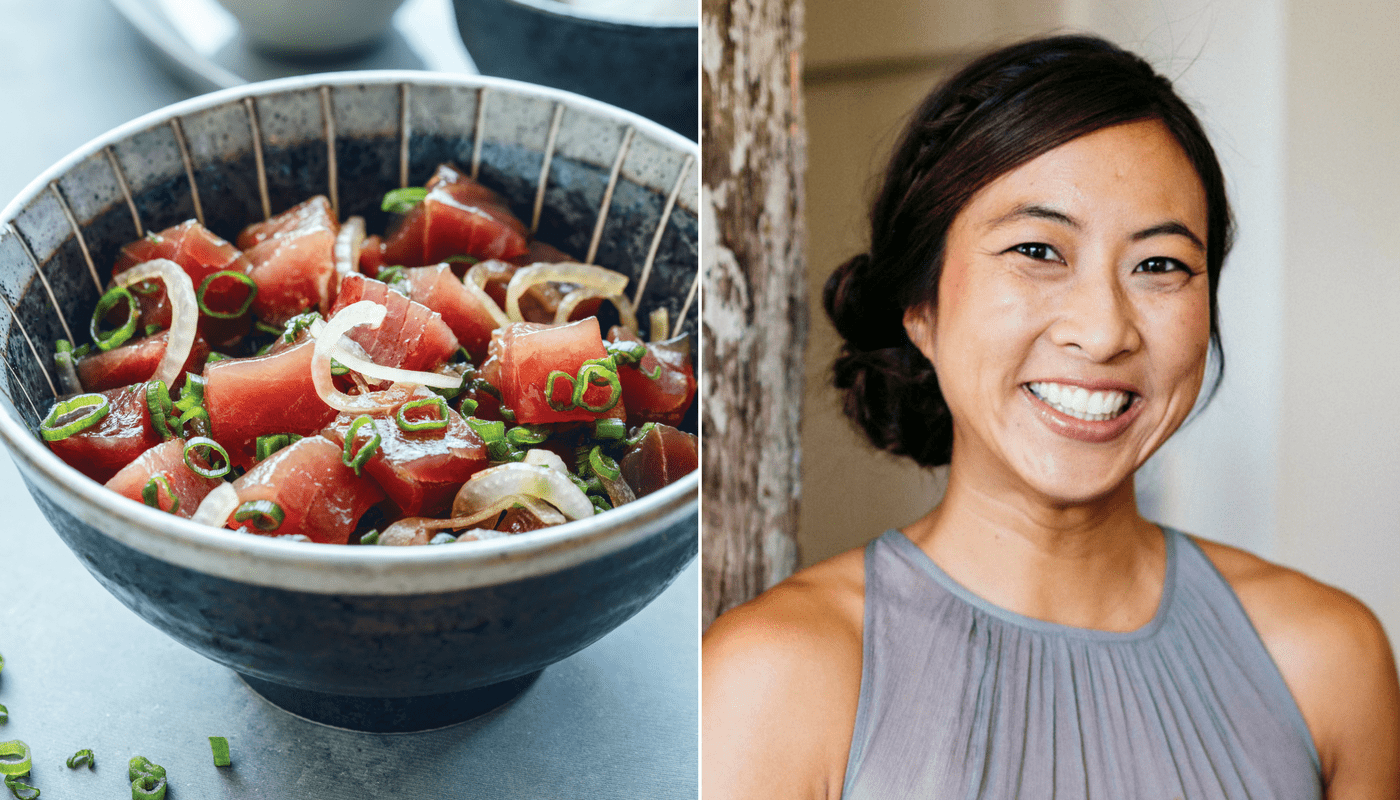 Poke, Hawaii’s beloved raw fish salad has hit the mainland big time. The traditional take is essentially fresh raw fish diced into small pieces and dressed with everything from soy sauce and ginger to wasabi and seaweed. It couldn’t be a simpler dish, and simplicity always invites improvisation. Chefs and fish lovers are having a wonderful time with poke. Our managing producer Sally Swift talked with Martha Cheng about the history and evolution of poke. Cheng is a longtime resident of Hawaii and has written The Poke Cookbook. We hope their conversation inspires you to try making poke at home. To help get you started, Martha Cheng shared with us her recipes for Shoyu Ahi Poke, Ume Shiso Pineapple Poke, and Beet and Macadamia Poke.

Martha Cheng: The word means “to cut or slice crosswise.” Here in Hawaii, we mean it as the raw fish salad that we eat everywhere.

SS: It's everywhere. When we were in Hawaii, we saw it in gas stations. We saw specific little poke stands. Where does it come from? What's the heritage?

MC: The roots come from the native Hawaiian preparation, back when they would get raw fish and season it with some sea salt that they dried in the sun. Add some inamona, which is crushed roasted candlenut, and limu, which is seaweed, and that was basically it. We eat a version of that these days on the islands; we call it limu ahi poke. What's really popular now is the ahi shoyu poke that evolved around the 1970s when all the descendants of the plantation workers – Koreans, Japanese, Chinese – influenced the mix and added sesame oil and shoyu.

MC: Relatively. That's what's funny. The word obviously existed a long time ago, but it wasn't associated with what we know now until about the 1970s.

SS: We are seeing it more and more on the mainland, and there are some pretty crazy variations. However, your book lends itself to making it at home. You think that's the best thing to do?

MC: I think so. If you can find fresh fish, then it's a great way to prepare it. Even if you don't have fresh fish, you can substitute all kinds of vegetables or tofu because shoyu, sesame oil, and onions are a great combination. It works well with so many things.

SS: What would you consider an entry-level poke for us?

MC: Definitely the shoyu ahi poke. There's a reason why it's so popular. It's just six ingredients, and you're chopping it up and throwing it together. It comes together in 15 minutes or so, and there's no cooking involved. You cut the ahi – which is usually yellowfin tuna – into cubes, then throw in some thin-sliced yellow onion and scallions, a bit of soy sauce, sesame oil, and if you like it, just a touch of heat through sambal.

SS: And that's it. It almost sounds like a rough-chopped salsa in many ways.

SS: What about ideas for variations?

MC: There's a restaurant here in Honolulu called Mud Hen Water. They did a beet poke, which uses the same shoyu and sesame oil, but applies it to beets instead of ahi. The great thing is that the beets are even almost the same color as the ahi.

SS: I've noticed that there are a lot of opportunities with poke to use unusual ingredients that you can find like that fermented plum that the Japanese use, ume.

SS: Give us one using that.

MC: There’s the pineapple one, which is pineapple, shiso, and ume. There's a little, tiny, hole-in-the-wall poke place – which are, of course, people's favorites here among the islands - this place does an ume shoyu poke, and I love that sauce. Here on the islands, we love to eat pineapple with liu hing powder, which is a dried plum powder. It reminds me of that, kind of tart and sweet, just a little bit salty. It's really good cold, too, like on the beach.

SS: When do people eat poke in Hawaii? Is this a lunch thing, a dinner, or a starter?

MC: On the islands, we usually eat it as a shared appetizer. It's everywhere from potlucks to tailgates to weddings to pau hana, like after work when you're getting together with friends with beer and poke. It's just everywhere. We have it at Costco. We have it at all the supermarkets. Lately, we eat it as a lunch over rice. But the way we really eat it here is kind of the way you'd eat chips and salsa, like you were saying.

SS: You are so lucky to have that fresh seafood. Do you have any thoughts about why poke has become so popular outside the islands?

MC: It’s gone the way a lot of immigrant food has, and has evolved from what it was originally. I think there were a lot of Hawaiians and locals. When we say "Hawaiian" here, it means native Hawaiian. We use "locals" for people born and raised in Hawaii, but don't have native Hawaiian blood. When they moved to the mainland for work and were homesick, they had poke. There's this tiny little shop in San Mateo, California, that makes poke for homesick Hawaiians; they have for a really long time. What you're seeing now is chains trying to make money off of it the same way that Domino's makes pizza. On the mainland, you’ll see poke with pears and raspberries, served on top of a kelp noodle salad. I think people are trying to capitalize on the Chipotle model, the fast casual, and it lends itself well to that. It's evolved from what we eat here on the islands.

SS: Which is interesting to me that you are still there eating the very simple shoyu ahi.

MC: Here in Hawaii, we like what we like. Sometimes they say dining here is almost like this postcard from the 1960s or 1970s for the traditional places that are still around.

SS: I love that about Hawaii.

Sally Swift is the managing producer and co-creator of The Splendid Table. Before developing the show, she worked in film, video and television, including stints at Twin Cities Public Television, Paisley Park, and Comic Relief with Billy Crystal. She also survived a stint as segment producer on The Jenny Jones Show.
Cucumber Tahini Gazpacho with Crispy Spiced Chickpeas
Summer Squash Escabéche with Mushrooms, Arugula, and Steak
Salmon Cakes with Chimichurri
Sticky Korean Beef