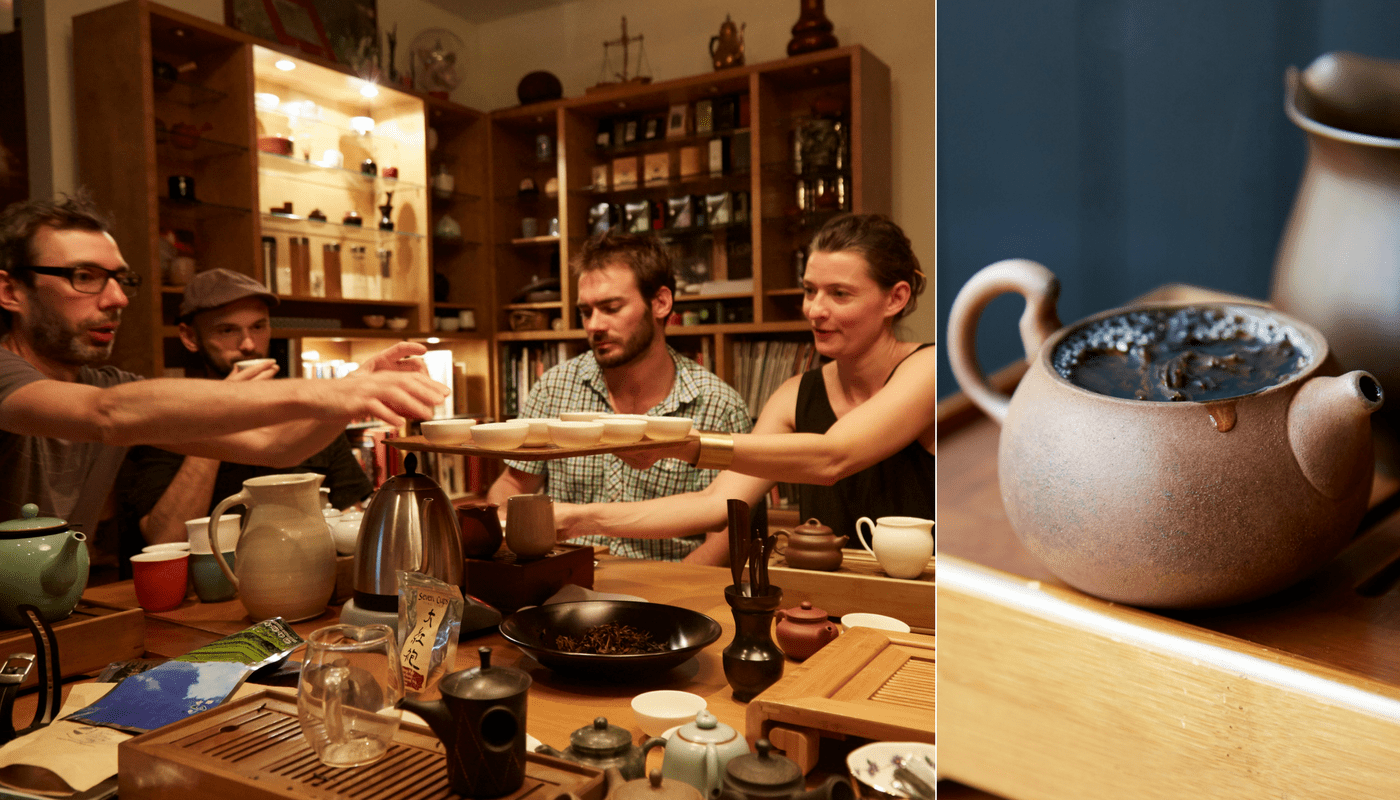 Writer Rowan Jacobsen infiltrated a secret society in Montreal that has a free-for-all competition. In fact, when describing the group, its leader (who Rowan identifies only by the letter K) says, “think Fight Club.” Rowan got the story for Vice magazine and joined Lynne Rossetto Kasper to talk about his unexpected experience.

For a unique tea-related recipe, check out our new video and recipe for Tea-Infused Potatoes with chef Raghavan Iyer.

Lynne Rossetto Kasper: I have to give away what we're talking about. The big reveal here is the title of your piece, “Getting Drunk on Tea Infusions with Montreal's Underground Connoisseurs.” What are we talking about?

Rowan Jacobsen: We're talking about tea, but it's not quite the tea that we all grew up with. It took me a few years to penetrate these underground tea circles. The hardcore tea addicts out there, or “tea hipsters” you might call them, drink tea in a completely different way than we tend to think of tea of being drunk here in the United States. They drink tea almost like espresso. It's very intense with more tea leaves and very little water, about what you would drink in an espresso cup. And they drink cup after cup after cup. Some of these people, like the ones that I was hanging out with, go deep into the night doing that.

LRK: Do they bring their own teas or are these teas from a particular tea shop?

RJ: They’re from all over the place. When K, the ring leader, finally invited me into it, he said, "Think Fight Club." What that means is that they all want to basically blow away the other guys. Some of the teas were from this high-end shop in Montreal that K runs, but others were special things that they had sought out. A lot of the best teas are hard to find, you have to have some connection in China or Taiwan. Once you have one of these great teas, which are insanely expensive, then you save it and show it off to your friends. So this night was all about everybody bringing stuff that you weren't able to find anywhere else and showing off.

LRK: Set the scene for us. Where are we? What do these people look like? Who are they? And how is the tea brewed?

RJ: This is in the Latin Quarter, the Bohemian district in Montreal, as dark was falling. I showed up at the shop and they let me in; there were a few people in there already. They locked the doors, pulled the drapes, a few other people would come and knock on the door, and they'd let them in. One thing I've noticed about tea hipsters is they tend to be mostly guys. They tend to be very skinny and have this sunken-eyed look. They all look like they stumbled out of a Wes Anderson film. There was a lot of French mixed with English, so it was kind of intimidating for me. I sat down at this table and there were all these electric kettles boiling, like six of them going at once. Tons of strange little baggies with dried herb in them all over the table. People were pulling them out of their pockets. It definitely felt like I was sliding into this strange drug subculture that I had no idea existed.

LRK: Tell me about some of the teas that you were tasting.

RJ: We started off with a white tea, which is a very light tea. It's made with the new buds of the tea plant, when the tiny little first leaves are budding out; it’s super-mild. That was definitely more like a warm up to get us going. As the night progressed, we would go to greens, then oolongs, then toward the evening we shifted to pu-erhs, which are like the holy grails of tea. They're aged for decades sometimes and are very expensive. They have an intense, deep flavor. It tastes like things that grow in the dark. It’s very weird.

LRK: What I remember about pu-erh is they come in bowls or in little patties. They don't look like tea leaves, they look like a little cake.

RJ: The tradition is to press them into little bird’s nests called tuo cha. They're also pressed into 250 gram discs, like little half-pound Frisbees that you break off a little chunk of and brew that little chunk. It takes you to a different place. I'd always liked tea, but I had not known that that tea could take you to these ethereal realms.

LRK: You quote K as saying, "With great teas, I always look for that special feeling. Westerners taste from the neck up. But in Asia, they taste with their whole body." Then he says, "Nice bib on that one" as he's tasting the tea, tracing the chi down his chest. Was this the sensation that your entire body was being affected?

RJ: Absolutely. As the cups of tea build up, you really do start to realize that you're thinking differently about your body and about time. One thing I realized is that coffee is all about the future; it's a very entrepreneurial drink where you drink it and you're scheming for the future. The more tea you have the more you leave all the worldly concerns behind and get in this bubble of the present. Which is really nice.

LRK: Sounds amazing. Does the perception of reality keep changing in that way, does it keep evolving?

RJ: It does and it's all about time. Your sense of time keeps changing and you get very happy, because you have quite a bit of caffeine percolating in you by that point. You do get lost in this little space, which I think is why tea has always been associated so closely with meditation and Buddhism in the East.

LRK: This is really heading into a completely different realm.

RJ: It took me a while to make that flip in my mind because I was coming from a wine perspective. When I taste things that are supposed to be really good, I try to figure out what those flavors are in my mouth. For the tea guys that's almost beside the point, what it tastes like in your mouth. If it tastes good and smells good, great. But they call it “the echo” sometimes. After you've swallowed, what's the echo? How does your body feel from that experience? The echo can even come up into your head. I had to learn to think differently and not pounce on the flavor in my mouth. Just let the experience evolve.

LRK: I have to ask you this. Can you tell us who K is?

RJ: Alright, I think he'd be fine with the reveal. His name is Kevin Gascoyne and he runs a shop in Montreal called Camellia Sinensis where I get most of my teas. This is actually a great time to do so because the Canadian dollar is in the tank right now; it's a good time to order from Canada.

Thanks to Anjali Pinto and Adrienne Anderson for allowing the use of their photographs in this article. Extra thanks to Anderson for providing us with more information about After Hours tea society at Camellia Sinensis. Rowan Jacobsen’s article on Montreal's underground tea scene was originally published by Vice. His latest book is The Essential Oyster.