Inside the Middle Eastern pantry with America's Test Kitchen 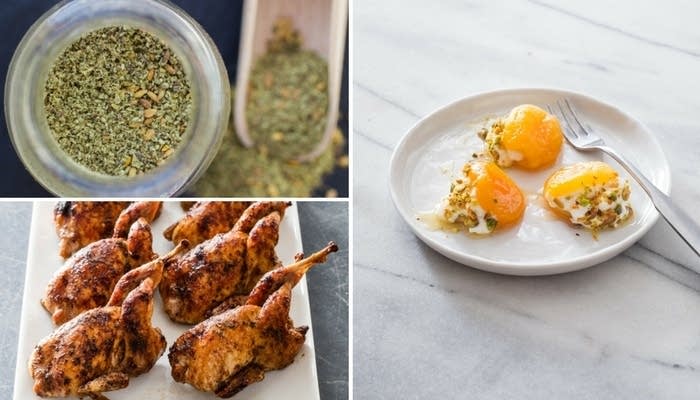 We check in regularly with the various personalities and experts from America's favorite cooking show. This week it's John "Doc" Willoughby, the editorial director for magazines at America's Test Kitchen.

Lynne Rossetto Kasper: Let's talk pantries. This the time of year -- with the new year -- people are “out with the old, in with the new.” Have you got any thoughts of what we should be thinking about? Directions we should take?

Doc Willoughby: We should be going in the direction of Middle Eastern flavors. Starting with an ingredient that I discovered long ago when I first went to Turkey back in the late 1970s. It used to be very rare, but now you can find it in most specialty shops or in many supermarkets: pomegranate molasses. It is the juice of a slightly tart pomegranate that grows in the Middle East. It’s boiled down to make a syrup, then you add a little lemon juice and a little sugar. It's very simple, but it has a deep, rich flavor. It's both tart and sweet at the same time, and it's got hundreds of uses. It's one of those ingredients that, once you get into your kitchen, you will start to find uses that you hadn't even thought of. I like to add a teaspoon of it to a vinaigrette. You can use it as a glaze for chicken or for other fowl. You can put it into a lamb stew -- at the end you drop in a couple tablespoons of this. It's one of those ingredients that is not only great on its own, but it brings out other flavors and enriches all kinds of dishes.

LRK: You know what I realized? It's really wonderful when you make panna cotta. You stir it in, and it's pretty. It's that gorgeous, very pale magenta. It’s a dynamite ingredient. What else?

DW: Another one is za’atar. Za’atar is a twofer because in Arabic it both stands for a certain kind of thyme that grows in the Middle East and also for the spice paste, the spice rub, that is made using that kind of thyme. Here in America we use just regular dried thyme, and it's mixed with sesame seeds and sumac. This is another reason that za’atar is a twofer, because sumac is an amazing ingredient. It's the ground-up dried red berries of a sumac bush that grows in the Middle East. It’s very tart but also very light. It's kind of like the flavor of lemon but a little lighter. It’s perfect for using when you want a sour taste but not quite as if it were a lemon, and you don't want the liquid. It’s perfectly suited for using in spice rubs, and the most famous spice rub it's used in is za’atar.

Za’atar is also one of those things that has hundreds of uses. You can put it on in olive oil and use it to dip bread into. It’s great for any kind of fowl, sprinkled on top. Putting it in yogurt in the morning. It’s really only got three ingredients, but it is so complex and they complement each other perfectly. There's a reason that, for hundreds of years, it's been the primary spice rub in the Middle East, and they just love using it all kinds of ways. If you have simple roasted or boiled vegetables, sprinkle za’atar on top. It takes you 30 seconds, and you have a really amazing dish. Since most people in our country aren't that familiar with za’atar it's going to be something new and different for them, and it takes you no time at all.

LRK: So what's next?

DW: I'm going to very quickly make a case for a controversial ingredient, which many people think is no good. That is rose water. You say rose water to many people, and they say “grandma's linen closet.” That's because they've been using too much of it. If you use rose water sparingly, it is a romantic ingredient. It's got that floral quality, that beautiful aromaticity. You use it just so you almost know what it is, but not quite. Don't use a tablespoon of it in your rice pudding, use a teaspoon. Just that little trace of that romantic aromatic floral ingredient is, to me, the essence of what Middle Eastern food is about.

Time to put Doc Willoughby’s Middle Eastern pantry suggestions to the test in your kitchen with these recipes supplied to The Splendid Table by America's Test Kitchen. Use DIY pomegranate molasses in the Pomegranate-Glazed Roasted Quail. Make your own za’atar to use in Roasted Butternut Squash Salad with Za’atar & Parsley. And perfect your measured use of rose water in the recipe for Turkish Stuffed Apricots with Rose Water and Pistachios.