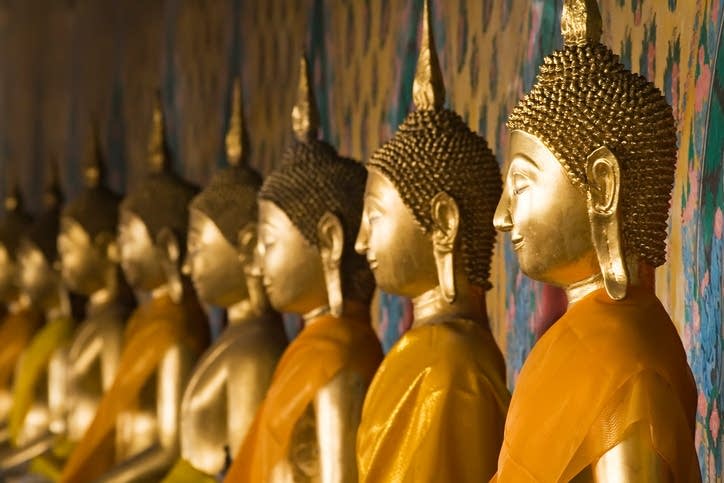 If there ever was an official month of dieting, it is January. Low-carb, low-fat, paleo -- they all get pushed to the side this year, because this is the year of Buddha's Diet. Dan Zigmond is a writer, director of analytics for Facebook, and a zen priest. He's also co-author of Buddha's Diet: The Ancient Art of Losing Weight Without Losing Your Mind. The Splendid Table managing producer Sally Swift got some detail on this fairly ancient diet.

Sally Swift: When most of us think of the Buddha, we think of this round, full-figured, seated, beatific man. Is that who Buddha was?

Dan Zigmond: That is not the Buddha. That figure that we see in Chinese restaurants and yoga studios, a kind of jolly Santa Claus-like man, is a Chinese monk who lived about 1,000 years later and who travelled all around China. He was seen as a bringer of good luck and good fortune. He became a symbol of happiness and abundance. In the United States and in the West, we’ve gotten confused about this person and started to think about his as the Buddha.

Buddha was born to a rural family in what is now Nepal. He lived his early years as a prince. When he was born his parents, as was common at the time, asked a fortune teller to come and give a prediction about what his life would be. The fortune teller said there were two possibilities: either he would become a great ruler or he would become a great sort of holy man. His parents knew which one of those they liked better and tried everything they could to steer him towards the life of royalty. They pampered him; he got everything he wanted. They were the original helicopter parents. They made sure that he never had a bad day. He lived that way for many years until he was a young man. Then he decided he wanted to see the world. He snuck out of the palace one day, and he was confronted with the fact that the world was not this sort of Shangri-La where he had been living. He decided to pack it in and try the life of a wandering ascetic in ancient India.

SS: It’s funny to think of getting lifestyle and diet advice from Buddha. How does the diet fit in with what you write about?

DZ: Buddha lived these two very different lives. First, he lived this life of luxury. Then, he lived this life of extreme hardship. What he decided after a certain point, was that neither of these was the path that would relieve the basic suffering that he saw all around him. Instead, he found this middle way, which avoided either extreme of indulging in luxury or beating himself up with these hardships.

SS: And very practical information about that, correct?

DZ: Very practical information. For example, it was very common for these wanderers to fast for long periods of time, to eat almost nothing. He tried this for a long time. He fasted so long that he almost died at some point. He decided that wasn’t going to accomplish anything, that wasn’t going to help anybody. Instead, he found this balanced approach where you would eat for certain hours each day, but then, you would also fast for certain hours each day. That’s exactly what we suggest in Buddha’s Diet that we limit our eating to a certain period -- we suggest 9 hours -- and after that time, we’re not eating. Each day combines a period of eating and a period of fasting in balance.

SS: There’s science behind this?

DZ: Absolutely. We had the good fortune to spend some time with Dr. Satchidananda Panda down at the Salk Institute of Biological Studies in San Diego. He’s done a tremendous amount of research on this, and other labs have too. He’s looked at the effect of what’s generally called intermittent fasting and has found all kinds of beneficial effects. In particular, it does seem to prevent many of the negative consequences that we’re all very familiar with from overeating. The key is that, each day, you limit your meals to a roughly nine-hour eating window. The hours that I tend to eat are 9 a.m. to 6 p.m. You can shift that around a little bit. Some people prefer to eat a little bit later. Some people find it easier to start a little bit earlier.

SS: I want to say eating includes wine, right? You may be done with your dinner at 7 p.m., but having a glass of wine after counts as food, correct?

DZ: Absolutely. Anything with calories. The idea is that you’re really trying to give your body, digestion, and metabolism a complete rest. Black tea, black coffee, water -- those things are fine. I love tea and have tea in the evenings often. But wine and other alcohol absolutely counts.

SS: What was Buddha’s goal with this diet? It was just his way of finding the middle?

DZ: It was his way of finding balance, of keeping food in its place. He wasn’t preaching this so that people would look good in a swimsuit or anything like that. He thought this was a healthy and mindful way to live.

SS: In the book, you also talk about other things that Buddha believed in. Can you tell us some of those hands-on living ideas he had?

DZ: This surprises a lot of people:  Buddha was into exercise. He walked all the time. He started every day by taking a long walk through the local villages. This being ancient India of 2,500 years ago, when he was going from province to province, he was doing all of that on foot. He got quite a bit of exercise; that’s something I think we have also lost a bit today. He talked about sleep, about the amount we sleep as being like the string of an instrument. When it’s too loose, it doesn’t really work. When it’s too tight, it doesn’t really work. Again, we have to find that right balance where he didn’t want anybody necessarily sleeping until noon, but he wanted to make sure that everybody got enough sleep that they could function and be mindful during the day.