Breakfast around the world: a global look at our first meal of the day

by Lynne Rossetto Kasper
Listen: Breakfast around the world: a global look at our first meal of the day
06:37 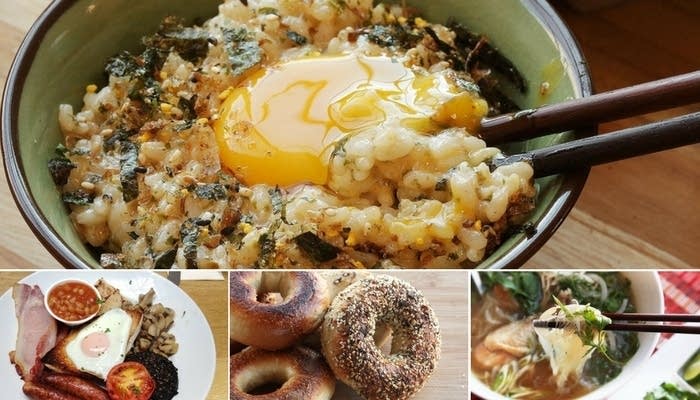 J. Kenji López-Alt is managing culinary director at Serious Eats and author of the award-winning The Food Lab. He recently wrote a mouthwatering article for Serious Eats called "It's Always Morning Somewhere: My Favorite Breakfasts Around the World." After reading it, we wanted to talk to Kenji about his travels and get a best of the best when it comes to global breakfasts.

Lynne Rossetto Kasper: Kenji, you did a piece on breakfasts around the world. How did this come about?

J. Kenji López-Alt: I've always loved traveling, and it's always interested me. Breakfast -- at least growing up -- was always sort of the same thing. We have a couple of our sweet things and a couple of our savory things, but it's mostly eggs and toast and things like that. But as you travel, you discover that's not how people eat their breakfast all around the world. Some people eat fish for breakfast, or they'll eat stew. Or they'll eat nothing but coffee and a piece of pastry. It's fascinating to me, the breadth of different types of food that people eat as the first meal of their day.

LRK: Give me some examples.

JKLA: My favorite breakfast of all time, and this one is probably not unfamiliar to you, is a good bagel from New York. I grew up in New York, so a really good, fresh bagel with cream cheese is a pretty typical Western breakfast. But when you go to Vietnam, it's not atypical to have a bowl of noodles with broth for breakfast. That's one of those dishes that I actually eat for breakfast at home as well, whether it's Japanese noodles or Chinese noodles. In college it was probably a bowl of instant ramen. I find with that salty kick and the starches, it's like eating toast with good salted butter but just in a different form. You get that same mix of salt and carbs I find attractive. Then there's the British or the Irish fry-up, which is the perfect hangover cure breakfast.

LRK: And fried bread that's been fried in bacon drippings; let’s not forget this, it’s genius. You really had me in the article when you started talking about Asia. How does China eat breakfast?

JKLA: My wife and I spent a good amount of time traveling through China a couple years ago. Our one basic rule was that if we saw a plume of steam or smoke coming out of an alleyway, we would investigate. One of the best breakfasts we had was in Beijing, where we were still a little bit jet-lagged. We were wandering the streets at 4:30 a.m. and saw steam coming out of an alleyway. It turned out it was a woman preparing dumplings for the breakfast rush that was going to start an hour or two later. We were the first customers there, and she had these freshly hand-crimped and steamed dumplings that were delicious. There's also jianbing, which is a Chinese savory crepe. It’s made on the same wide, flat cast iron disks that they make crepes on in France. You start with a savory crepe batter. It gets painted with chili oil and hoisin sauce. An egg gets placed directly on top of it and gets swirled around. Then you get cilantro, sesame seeds, and chilis. Sometimes, you can wrap up a piece of fried tofu puff or fried chicken. Just imagine a crepe crossed with a spring roll, so crispy and satisfying. It's one of my favorite breakfasts anywhere.

LRK: How about Indonesia? We never hear about stuff from Indonesia.

JKLA: Fried rice or fried noodles, bami goreng or nasi goreng. It’s similar to what you might be familiar with at a Chinese restaurant, except the flavorings are a little bit different. The main flavoring would be ketjap manis, which is a sweet, syrupy soy sauce that they use in Indonesia; along with chilis, vegetables, and maybe cucumbers on the side. You can top it with a fried egg if you'd like, but the main component is that starch. It's going to be those noodles or the rice.

LRK: What about some place like Singapore or Malaysia? Maybe that's lumping too much together?

JKLA: I think the signature breakfast in Singapore is soft-boiled eggs with kaya toast. Kaya jam is a spread that's made out of coconut, cooked down until lightly caramelized. It has a lemon curd type of texture but flavored with coconut. You'll spread that onto white bread toast and eat it with super runny eggs -- eggs that are soft-boiled to one or two minutes. You break them into a bowl, stir in some soy sauce, and eat those savory eggs. Then you have this sweet toast with kaya jam on the side. That’s the breakfast you have to get when you're in Singapore because I don't think you see it anywhere else in the region.

LRK: What did you eat for breakfast when you were growing up?

JKLA: It was a mix of things. My mother was Japanese, and I lived with my maternal grandparents as well. Sometimes we would have Japanese food -- things like tarako, which is salted cod roe. My grandmother had a little miniature charcoal grill that she would grill it over and then serve it crumbled up on top of rice. We would have tamago kake gohan, which is rice with a raw egg stirred into it. It’s rice, a pinch of salt, a pinch of MSG powder, a dash of soy sauce, and then an egg broken over the top. You whip it up with chopsticks. The egg cooks a little bit from the heat of the rice and gets this nice, frothy, light texture. It’s like a porridge, but also slightly souffléd. We ate stuff like that, but we also ate a lot of Western things like breakfast cereal -- Cocoa Puffs was my favorite. My mom would make French toast, sometimes pancakes, a mix of Western and Japanese foods because she did move here from Japan when she was a teenager.