A season in Colorado

by The Perennial Plate
Listen: A season in Colorado
06:44

Mirra Fine and Daniel Klein, the filmmaker and chef duo behind the Perennial Plate, came up with an idea: Travel the world documenting how food figures in people's lives all around the globe, and instead of heading for famous restaurant kitchens, track down the people we rarely get a chance to meet. 150 short films later, this James Beard Award-winning duo are back with season four. Lynne Rossetto Kasper caught up with them.

[More from the Perennial Plate.]

Lynne Rossetto Kasper: Set up season four for us.

Daniel Klein: The concept came about of going and spending a season in a place: a summer, a fall, a winter, and really diving in deep. We reached out to tourism boards and various places that we were interested in visiting, and promoted the concept of making ten films that really looked at a place in a way that other shows and other series don't have the time to do. We get an Airbnb, and we spend two months really looking at all of the different farmers, fishermen, and foragers, just different stories in the unique region. We started off with Colorado. We're headed to Ireland, then Mexico; in each place we spend a summer, fall, or spring.

LRK: In a couple of months in Colorado, what did you find?

DK: We got 150 story ideas recommended to us, and we chose ones that were interesting to us. There are great immigrant farming stories. We found beautiful, wild food CSA's. Three stories in particular that were pretty fascinating were folks living out of an RV who fish or hunt all of their food. They don't buy anything. They're in an RV parking lot, and they go out fishing every day, freeze their catch, smoke it, and preserve it.

During the hunting season, they do the same thing. They go to the store to buy salt, flour, and some staples, some oil, things like that. They did that because the partner, Kevin, was having serious health issues. They tried it, first as an experiment to see, "What if we cut out all conventional meat and only ate wild food?" Kevin was on all these drugs, and within a year he was off all the drugs and living off this food he had harvested himself. There also has to be something to do with that way of life, you know? They're retired and living in this RV, and he goes out fishing every day, standing in the Rio Grande, surrounded by mountains, and casting a fly rod. What could be more peaceful than that?

DK: We spent a lot of our time in Durango, which is a gorgeous little town in southern Colorado, and just outside of town there's a place called Turtle Lake Refuge. That spoke to us because we hadn't heard of anything like it before. It's a wild food CSA, so in the same way that you have your community supported agriculture CSA here, where you buy a share and get whatever is available at that time of year, they do the same with wild foods.

All of the different herbs, lamb's quarters, mushrooms, and different things that grow in the wild--they pick those and put together a little box each week. Not just the raw foods, they also prepare them for you a little bit, because who knows what to do with thistle root or mallow? They give you a recipe, and they also make a cold chai tea from thistle root. They make actual real marshmallows from mallow root.

LRK: Who is doing this? Is this a group of people or is it a couple?

DK: This was started by a woman named Katrina Blair who's maybe a type of goddess. She lives in a tree house: literally, a house that surrounds a growing tree. It's a very magical place. She lives with a number of other women. It's a surreal, magical land that they live on. I'm having a difficult time describing how it is, but you walk in and are overwhelmed by how they're living with nature.

It started with her caring for this land that she had, and it has since grown in interest as people become interested in wild foods, organic farming, not using pesticides, and so forth. They don't call it a CSA, as in community supported agriculture, for them it's "community supported abundance." That's their message in doing this.

LRK: Great shift in mindset. Is there someone else that comes to mind?

DK: We met this lovely woman named Bessy White in Cortez, Colorado. She's 83 years-old, and started the Cortez farmers market. She and her sister, who's two years older, had some extra tomatoes and extra zucchini, and wanted to do something with it. They were farmers, and they set up on the courthouse parking lot 43 years before, without permits. They asked the town mayor, "Hey, can we sell some stuff here?" It just blossomed from there, and she's only missed one farmers market since. She's the kind of woman who ages gracefully. She's the ideal grandmother.

She made us a strawberry-rhubarb pie with rhubarb picked from her garden and strawberries that she had frozen earlier in the season. She told us about what life was like in Cortez, Colorado 30 years ago, when they didn't have electricity. They had a way of doing things yourself, making your own dough, making your own pie. It was just something good in the world and that we didn't need to go out to the store and buy everything. The old-fashioned way is pretty OK sometimes.

LRK: She's at that farmer's market every week?

DK: Every Saturday. She now makes 16 pies a week and sells them for six dollars each. She's a delightful woman. 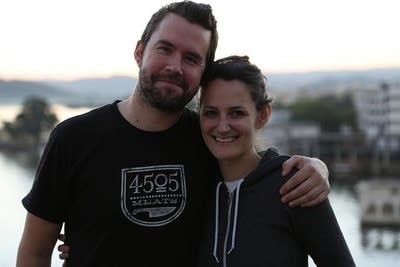 The Perennial Plate is an online documentary series dedicated to socially responsible and adventurous eating.  The episodes follow the culinary, agricultural and hunting explorations of chef and activist Daniel Klein and filmmaker Mirra Fine.