by The Splendid Table Team 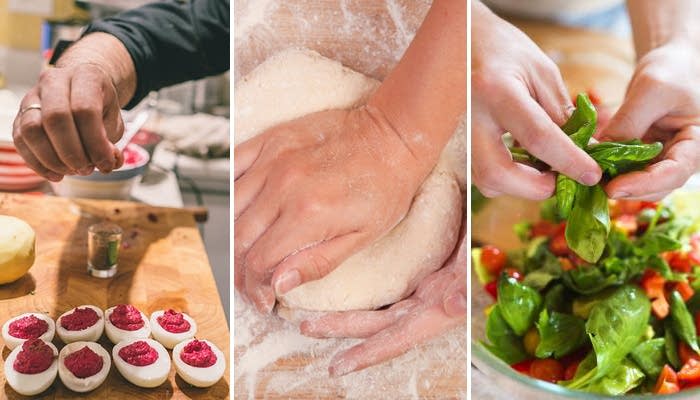 Things To Do With Rice
Gold in the kitchen: amp up your cooking with caramelized onions
Bryant Terry's Vegan Soul Kitchen brings fresh flavors to traditional soul food
Photo: Compiled by The Splendid Table

Photo: Compiled by The Splendid Table

Over the last two decades, we've learned a lot of essential kitchen techniques from our guests. In celebration of our 600th episode, here are 20 kitchen techniques we still use today. You might even want to try them out on the best recipes in the history of the show.

Harold McGee: "A 1-inch thick steak will thaw in about 20 minutes in room-temperature water and more like 10 or 11 minutes in water that is 100 degrees or so (like a hot summer day). It turns out that if you do the math, which these labs did, those thawing times are so short that they don’t give bacteria a chance to start growing and cause any trouble. So it turns out that thawing in 100-degree water is perfectly safe." [Full story]

2. Test the temperature of your oven by baking Pillsbury biscuits

Michael Ruhlman: "You can actually test [the oven temperature] by buying Pillsbury biscuits and putting them on sheet trays and baking them for exactly the right time that the instructions say. Those recipes have been heavily tested. If they are underdone, your temperature is a little low. If they are overdone, your temperature is a little high. Put the biscuits throughout the sheet pan and you see where the hotspots are." [Full story]

3. Your hands are the best kitchen tool

Daniel Patterson: "You can go out and you can buy any kind of high-tech tools. But at the end of the day, there's one thing that gives more information more accurately and more consistently than anything else, and that's my hands." [Full story]

[Also: Three tools you don't need in your kitchen.]

4. There are eight ways to extract flavors from a whole spice

Raghavan Iyer: "If you give whole spices to a good Indian cook, he or she should be able to extract eight different flavors from a given spice." [Full story]

5. If a recipe calls for bay leaves, use them

J. Kenji López-Alt: "If you go and do some A/B testing -- make one stew with [bay leaves] and one stew without them -- you'll find that they do contribute a slight sweetness. They bring out the meaty flavors of beef and chicken. They even help if you're making a vegetable soup -- they add a savory quality to the whole thing.

"They are an optional ingredient, but things are definitely better with them." [Full story]

6. Balance bitterness with fat and salt

Jennifer McLagan: "Try to balance bitterness with something else. Something salty -- salt will often cut the bitterness -- but also something fatty. I should have known this straight away, fat and bitter are perfect partners. If you have something rich and you match it with something bitter, they play off each other and make each other taste even better." [Full story]

7. Taste everything as you cook

Cal Peternell: "I think the first one is a rule that you can't break: You have to taste everything. It's really what makes the difference between a good cook and a less good one. It's important to taste the ingredients as you go along. You taste them when they're raw; for the most part, you can taste almost everything raw. While you're cooking it, when you think it's done, put those last little touches on. That's the one unbreakable rule." [Full story]

8. Season your food from great heights

Thomas Keller: "Season your food properly -- not by seasoning a piece of meat with salt when you’re really close to it, but by actually holding your hand up rather high, having the salt between your fingers and letting it fall. As it falls through the air, it’s dispersed out evenly over the piece of meat, the vegetables or whatever you’re using. Sometimes we tend to salt really, really close to our products. We therefore concentrate that salt in a specific area and don't get a uniform seasoning across the surface of it." [Full story]

[Also: Use salt at both ends of cooking.]

9. Shop for chocolate by percentage

Alice Medrich: "Those percentages mean so much to how the chocolate performs in a recipe. It's better now to shop by percentage and disregard the terms bittersweet and semisweet." [Full story]

10. For accuracy, weigh your ingredients when baking

Thomas Keller: "We talk about baking and baking is precise. We all know that if the three of us scooped out a cup of flour, that we’d have three different weights and therefore it’s not going to be the precision that we want. If you’re dealing with cups and teaspoons, it’s kind of an archaic approach to baking at a high level." [Full story]

11. Knead dough for scones as lightly as possible

Edd Kimber: "It's a type of kneading, but it's the lightest possible kneading you can do. You're not stretching the dough, it's more of a fold. You're trying to incorporate a little bit of tension into the dough and also lots of air. Then you cut out your scones as you would do normally. But then you leave them to rest for about an hour." [Full story]

12. Preheat the pan before you roast vegetables for better browning

Tim Cebula: "It’s something that a lot of us don’t even think to do, while oddly we’re all very aware of how important it is to preheat your pan on the stovetop before you add things in. The same principle applies here: When you preheat your pan for roasted vegetables, you’re going to end up with less sticking and better browning." [Full story]

[Also: You should also preheat your cast-iron pan.]

13. Roast fruit before adding it to ice cream for a more intense flavor

Jeni Britton Bauer: "For fruits that are high in water, a lot of times I will roast them with some sugar to bind some of the water to sugar, and also to evaporate some of that water and concentrate the flavors." [Full story]

[Also: If you are making gelato, use over-ripe fruit.]

14. A charcoal chimney is the easiest way to start a fire for grilling

Adam Rapoport: "You'll definitely want to buy a charcoal chimney -- they're those cylindrical metal canisters with a handle. You fill the top with charcoal, stuff the bottom with newspaper, light the newspaper, and within 15 minutes you've got glowing orange coals. It's the easiest way to start a fire, and it means you don't have to soak your charcoal with lighter fluid. Charcoal chimneys will change your grilling life -- guaranteed." [Full story]

Bill Waddington: "It's the easiest way to make tea in the world. You don't even need to know how to boil water.

"All you do is throw some tea leaves in a pitcher or jar at bedtime, fill it full of tap water, and throw it in the fridge. Use about 2 tablespoons of tea per half gallon of water. Put the leaves in a strainer or a filter bag. In the morning, voila, you have a whole pitcher full of iced tea." [Full story]

16. Preserve the flavor of fresh fruit by infusing alcohol

Andrew Schloss: "If you have ripe strawberries right now, you put them into vodka, and all of that ripe flavor goes into the alcohol and stays there. A year later it’s still there as if you’d just picked that strawberry." [Full story]

17. Clap your hands when you make fried chicken

Lee Brian Schrager: "I learned that all of America is clapping their hands when they're making fried chicken -- both while doing it and probably at the end to applaud themselves on such a foolish thought."

18. Don't throw away stems and leaves -- you might be able to cook with them

Tara Duggan: "Leeks aren’t as commonly used, but they also have a huge amount of dark green parts that most of us think of as inedible. They’re actually delicious but just take a bit longer to cook than the white and light green parts prized in so many recipes." [Full story]

[Also: How to cook with apple cores.]

19. Make seasoning your cast-iron pan part of your cooking process

J. Kenji López-Alt: "I think one of the reasons cast iron is so intimidating to people is because of the seasoning step. Once you just make it part of your daily routine, it's an easy 10-second step to do at the end of every cooking session." [Full story]

20. Double the life of your cheese by storing it in cheese paper

Steve Jones: "We highly recommend that every piece of cheese that leaves my shop leaves in perforated cheese paper. There’s one out there that consumers can buy from a brand called Formaticum. It’s a French-made paper that’s dynamite. It works really well; it’ll add a ton of life to your cheese. It allows the cheese to continue to breathe without it suffocating and without all that moisture being stuck inside. It will about double the life of your cheese.

"[If you can't get that] I would recommend wax paper or parchment paper loosely wrapped around the cheese and then tucked into a Ziploc. You’re going to want to let the cheese breathe, but you don’t want to let it in an environment that’s going to dry it out. So that Ziploc is going to keep your humidity up." [Full story]