Don't be afraid of making tortillas at home

by Melissa Clark
Listen: Don't be afraid of making tortillas at home
05:07 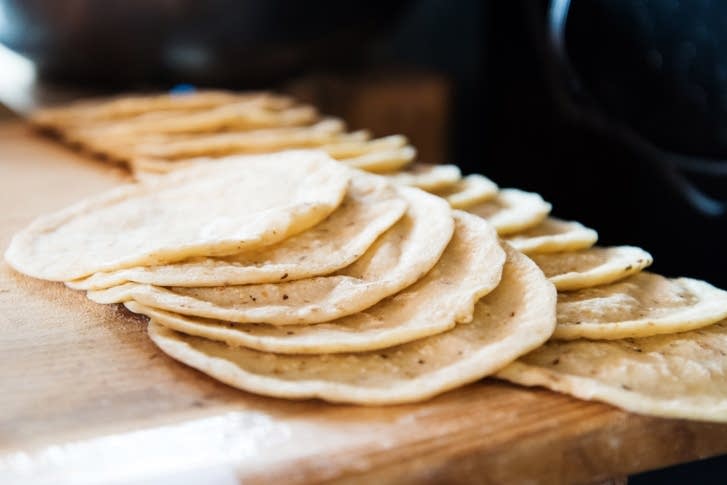 Melissa Clark: First of all, just break it down for us. Tell us that making tortillas at home isn't scary.

Alex Stupak: It's not scary at all. It's not even a recipe. It's a technique. If you enjoyed playing with Play-Doh when you were a kid, you're going to enjoy doing this.

MC: What's the connection between Play-Doh and tortillas?

AS: You have masa. Masa is a dough made from corn. It's soft, malleable and it just feels great to hold.

MC: What is the difference between masa, dough and just a regular cornmeal dough?

AS: Masa is a dough made from corn, but the corn has been nixtamalized first. Most of the corn that covers the earth is a grain. It's starchy, it's dense and it's difficult to digest. You wouldn't want to eat it in its raw state. It has to go through a process to make it delicious but also nourishing.

You boil this field corn, hominy, dent corn. There are all different varieties, but they're all devoid of sugar, very starchy. You boil this corn with limestone. It softens it and it makes it smell better and taste better. Then if you grind it, it makes this dough.

MC: But you don't have to do that because when you buy masa harina, it's done for you?

AS: Yes. This is not a process that anyone could do in their home anyway. The nixtamalization process is very easy, but to actually grind that you need very special types of volcanic stone. So thank god there is masa harina, which is what we should get people excited about going out to buy to make tortillas.

MC: Where can you find masa harina?

AS: I've never not seen it in a grocery store. There are different brands. It's shelf-stable, so to buy five pounds of it and have it in your pantry indefinitely is not a bad thing.

MC: What's the next step?

AS: You add water and then you have masa.

MC: How much water? Are you looking for something that is as thick as Play-Doh? A little thinner?

AS: You're looking for something as soft as possible without it actually sticking to your hand.

MC: Then once you have it, do you let it sit? Do you form it? What happens next?

AS: You don't need to let it sit. It's ready to go. When you're working with it, you just want to keep it covered with a moist towel because it dries out rather quickly.

Then you're basically rolling a golf ball-size ball, you're pressing it out and you're going to have a raw tortilla in your hand.

MC: Then you just fry it?

AS: Put it in a hot skillet.

AS: You can try in between two sheets of plastic. You can also try patting it out with your hand.

AS: Hand-patted tortillas are actually the apex of tortilla-forming skill. Again, I really recommend buying a tortilla press. You can buy one on Amazon. They're not expensive. They're like $15.

MC: So it's a low investment to try it out?

AS: I think they're worth having around.

MC: Are there different styles of tortillas in different parts of Mexico, or would this basic masa tortilla be something that you'd find all over the country?

AS: A tortilla is going to be made out of masa. Corn is king there. If you start getting into the northern parts, flour tortillas do start to pop up, but they are much less common.

Tortillas, how they're shaped or the size of them, that varies from region to region. I don't think anyone needs to worry about that though. I think people just need to try this once and not obsess over the shape. If yours looks a little amoebic and not round it's still going to be better than buying something that's days old and then reheated.

MC: How long will it keep? When I buy a package of tortillas in the supermarket it will last for days. Do the fresh ones last, or do you need to use them immediately?

AS: You need to use them right away. That's the real point of all of this is that usually the ingredient missing from good Mexican food is freshness. We wouldn't dare to reheat pasta or we wouldn't dare to make risotto days in advance and reheat it. But for some reason with tortillas we're all afraid of them. But it's actually easier to make a tortilla when you think about it than it is to make risotto.