The history of cheddar cheese reflects the development of the U.S. food system

by Patricia Jinich
Listen: The history of cheddar cheese reflects the development of the U.S. food system
06:50 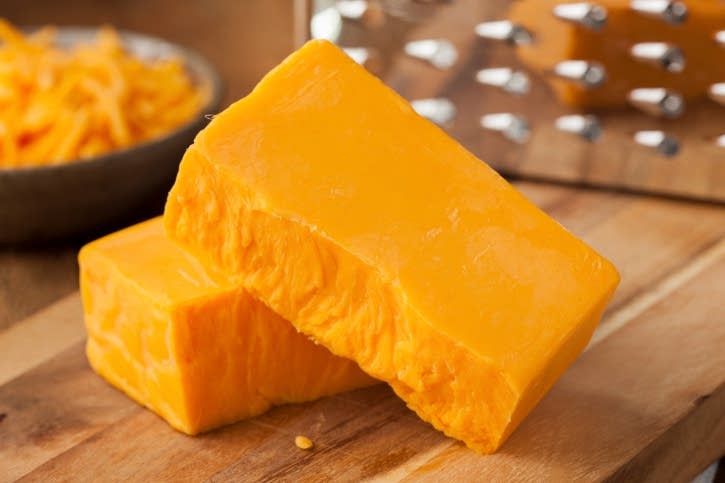 "We don't really think about it, but the history of cheddar has really affected American cheesemaking in general, and also just the food system itself in the U.S.," says cheesemonger Gordon Edgar, author of Cheddar.

Pati Jinich: What I want to know is why cheddar?

Gordon Edgar: We're in the midst of this amazing cheese renaissance in the U.S. right now. There's more great cheese being made here than probably any other time in the history of the U.S. in terms of different styles, in terms of really quality stuff.

I asked myself at some point: "Why did we need this cheese renaissance? Why 20 years ago, when I started, wasn't it like this?" I realized that the answer to that was cheddar. It seemed to be something worth exploring.

There's always something to be gained when you spend a little time examining something that you usually take for granted. I think cheddar is one of those things. It's everywhere. We don't really think about it, but the history of cheddar has really affected American cheesemaking in general, and also just the food system itself in the U.S. It really reflects the way the American food system has developed.

PJ: What are the origins of cheddar here in the U.S.?

GE: Cheddar is originally an English cheese. It has been made since the 11th century around the village of Cheddar, England. It was typically a farm-made product.

When people started coming over to this land that would become the U.S., people also brought cheddar with them and cheddar-making. It was made here from very early on.

If we really want to talk about more modern-day cheddar, if we look at 1851 as the important date, that's the date that the Williams family in upstate New York developed the first cheddar factory. Before that, pretty much all cheese was made on the farm; the farm wife made it. But this was the first time that people were setting up a building specifically for making cheese and getting the local farmers to bring their milk to one place to make cheese.

That very much caught on. These things don't all happen at once, but pretty much that changed the way that cheddar was made in the U.S. and then later in other countries as well. It turned cheddar from a farm product into a factory product. It turned the cheesemakers from women to men. It really began this road for cheddar being made in more and more efficient ways and with -- I think a lot of people would say -- a lot less flavor further down the line.

Pretty much every development was made to make a cheese as efficiently as possible. That made a lot of sense when you're talking about a farm back in the 1850s and trying to make cheese that didn't rot, that didn't blow up, that didn't get maggots in it. But then you take it from there, the logical extension of that -- if your goal is maximum efficiency, maximum yield -- processed cheese like Velveeta is the logical outcome of that.

That's because there's no loss with Velveeta. You make it and it lasts forever; it's not going to go bad. There's this perverse logic to it, which I think is also the logic of the way that a lot of food is produced in the U.S.

PJ: Tell me a little bit about the color. When did it turn that bright orange?

GE: The coloring is usually annatto, which is a type of bean. It's a natural coloring.

PJ: Annatto seeds? We have tons of those in Mexico.

GE: Honestly, there's some debate about when or why it started, or exactly whether it was meant to be a fraud or just happened to be. But basically it was meant to disguise the color of the cheese.

The color of the cheese would always be the same if you're using the annatto, whereas before you would have these seasonal differences. If the cows are out there on pasture, the milk is going to be much more yellowy than it is if the cows are eating grain. You used to be able to just tell -- you could look at cheese and say, "This is from an animal that's grass fed or has been on pasture, and this one hasn't." But with the addition of annatto, it was an easy way to make cheese look the same all the time.

PJ: Where does the best cheddar come from these days?

GE: Usually when somebody asks me that question, it's on a regional radio show. So if somebody asked me that and they're from Wisconsin, I'll say Wisconsin. Or if they're from Vermont, I'll say Vermont. But you're national, so I can't really say that. I would say that the best cheddar comes from all over the country. People are making good cheddar. It just has certain regional differences.

In Vermont, people who grew up in the Northeast really expect this really bitey, bitter, sharp cheddar. To them that's just normal. That's what cheddar should be. But if you're from Wisconsin, you want a sweeter, creamier cheddar. That's what you think cheddar should be. So a little bit it's hard to answer because different people are really looking for different things.

The clothbound cheddar, which is more of the traditional style of cheddar, basically went extinct in the U.S. for a couple decades until it got brought back. The people who are making those cheeses, those traditional style clothbound cheddars: Grafton makes one, Cabot clothbound aged in Jasper Hill, the Flory's Truckle from Missouri, the Fiscalini from California. To me those are the most amazing cheddars made in the country. That's because of their style. You get a more complex flavor, a little less sharp flavor generally,  but a little more complex flavor. It's really interesting cheese.

The most traditional cheddar in the world: cloth-wrapped, raw milk, farmstead and they even still make their own cultures.

Made by Mariano Gonzalez, the person who brought clothbound, natural rind cheddar back to the U.S.

Tony and Julie Hook have made the longest-aged cheddars in the U.S. The 20-year is sold by pre-order for over $200/lb, but their cheese is good at any age.

The best of the new-school cheddars: sweet and sharp and with those crunchy bits. Made by a Mennonite family from the milk bought from nearby Amish dairy farmers.