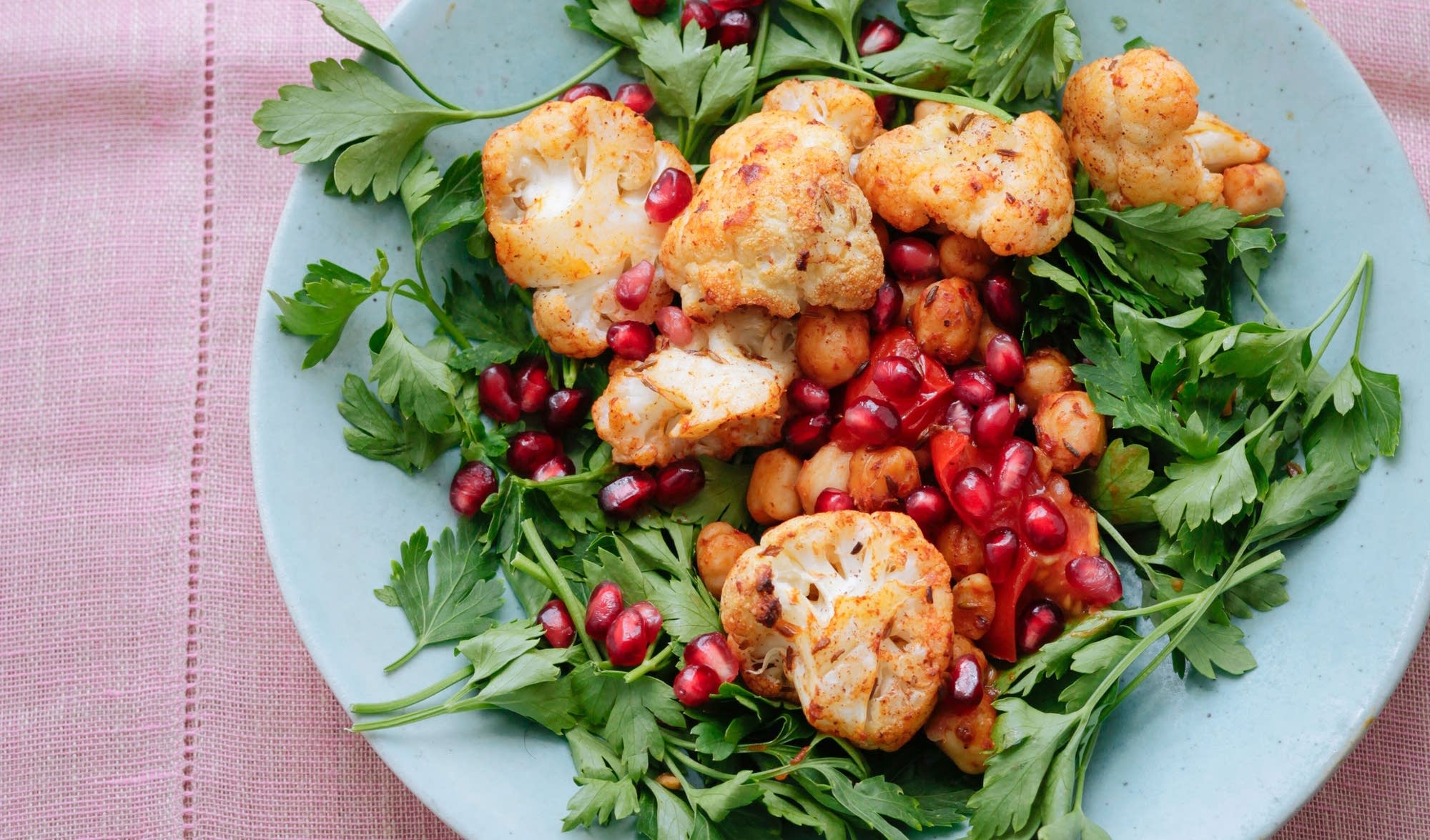 Nigella Lawson, author of Simply Nigella, says food is meant to be celebrated. She shared her recipe for Warm Spiced Cauliflower and Chickpea Salad with Pomegranate Seeds (pictured above).

[More from Lawson on airbrushing, Italy, The Taste and summer fruit.]

Lynne Rossetto Kasper: Looking at this book, I got involved reading it. I realized this feels so personal to me, the reader. There's this pervading sense of calm in the book. This just feels so intimate. It feels like we're restoring ourselves together. Where did that come from?

Nigella Lawson: Writing about food and talking about food is always intimate. We all have a very intense and personal relationship with food. As long as a writer is being honest and authentic, we always sense that. I enjoy the conversation around food.

Because of that, I allow quite a bit of time to talk at the beginning of each recipe, so it's a bit like settling down. I want to settle down with the reader and talk. In my mind, there's a conversation and a response.

I think all my books are personal. I do feel that the recipe for me is a very highly charged autobiographical form -- it's like a diary entry. The recipes I cook and write about, they're almost like writing a journal; it feels like that.

LRK: The recipes read like that. You say that when your first book came out, the editor branded it in her mind as being, what was it?

LRK: You say this one is the cold-pressed coconut oil, ginger, chili and lime cookbook.

NL: It is. Although, actually, there's an awful lot of extra-virgin olive oil, which I regard as the elixir of life.

LRK: I have to say this is a quartet that I am addicted to. Let's talk specifically about some of the things you do with it.

NL: I add it to soups. For example, I have a sweet potato, orange and ginger soup. Because as much as I adore a sweet potato, I find that unmediated the sweetness is too much. Citrus and that piece of ginger are just perfect.

I also love the sort of fuzzy, nubbliness of the old-fashioned chickpea soup that perhaps is not heavily seasoned. I thought I wanted to bring a bit of brightness and light to it, so I added some of the flavors of a Thai hot and sour soup. I again added lime, chili and ginger.

I also found this wonderful way of getting ginger to be even more dominant. I peel my ginger, and I use a teaspoon for that. If you use a knife, you just waste most of the ginger root. Then I grated it, put it in a bit of paper towel and made a little swag bag, like making a tea bag. Then squeeze -- this incredibly intense ginger juice comes out. Even though I might grate ginger and put it in a soup, at the end if I want to add more, I just make this ginger juice.

I have a bundt cake that's cider and five-spice. It's a bit like gingerbread only with slightly more of an anise seed, licorice note -- five-spice does that. And also an awful lot of fresh ginger. The fresh ginger really adds a different sort of heat. It's somehow rounder.

It can be used in sweet and savory. I have to really think of a reason why not to use it.

LRK: You mentioned something about cooking yourself strong.

NL: I find the act of cooking itself restorative. But it has to be very simple because at times when I'm either overworked, stressed or generally depleted, I don't really want to feel I have to concentrate so much and worry about whether I'm doing something right. So a little light stirring, maybe some chopping, but generally something that is cooked quickly.

I suppose it should have ingredients in it that make my body feel strong and full of good things. For some reason, my body told me to eat sweet potatoes and I obliged. But also, quite a bit of broccoli and cauliflower. I started roasting chickpeas and cauliflower -- really more baking them together. Once you have cooked cauliflower in the oven, there is no turning back.

The simple rituals of chopping cauliflower, tossing it in oil and spices, and putting it in the oven. And while that's in the oven, opening a jar of harissa, turning some chickpeas and some sliced-up tomatoes, then adding that.

I'm getting myself ready, I'm calming myself down. I'm feeling ready for my supper. I can smell it.

I make a simple warm salad. I use parsley like a salad leaf. I think beauty is important in terms of how one feels in life generally and in the kitchen -- the aesthetic uplift never goes amiss. I sprinkle on pomegranate seeds and that tang.

Not only do I have supper, but I have enough left over for lunch the next day. That's important too. I think we're aware that cooking for others is an act of generosity or kindness. It's really important I think to be generous and kind with oneself. That for me was the central part of making this book.

LRK: Tell me your feelings about the term "clean food."

NL: I feel that I sound like I'm getting rabid on this. I don't like the term "clean eating" or "clean food." I hate the notion that's implied, that other forms of eating are dirty or shameful. I hate food shaming. I also think that no one makes a good decision out of negativity. If you make people feel bad about what they eat, it's just going to compound the issue.

Obviously I agree that eating real food and not processed food is good and better for one, but I do feel that a lot of clean eating is too restrictive in its approach. There are so many foodstuffs taken out that it becomes a very narrow-minded and almost self-persecuting way of eating.

But I don't really have anything against the food itself. I just don't like it if I think there are punitive implications either to oneself or to other people. I think food is there to be celebrated. By celebrating food, we celebrate life. If you try and take that away or erode that in any way, then life and oneself are both diminished.