Chef Vikas Khanna on Thanksgiving: 'It's the best time of the year'

by Lynne Rossetto Kasper
Listen: Chef Vikas Khanna on Thanksgiving: 'It's the best time of the year'
08:46 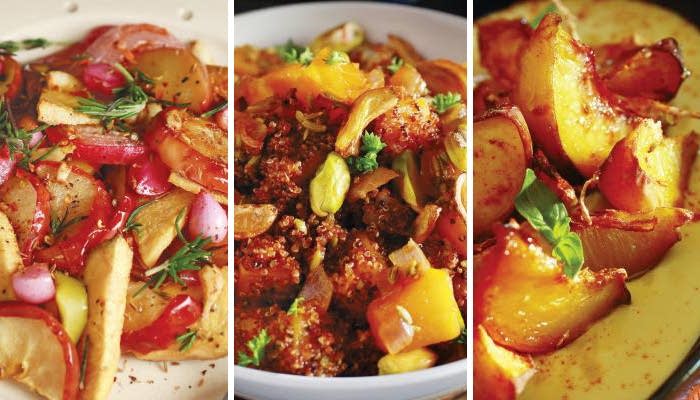 Photo: Compiled by The Splendid Table

Chef Vikas Khanna, author of Indian Harvest, shares a vegetarian Thanksgiving menu and explains why he once found inspiration in Jonathan Livingston Seagull.

Previously on The Splendid Table, he talked about spending time with the Dalai Lama, viewing religion through the lens of food and the versatility of chutney.

On why he cooked as a child

Lynne Rossetto Kasper: Let's talk about your beginning because I understand you were born with a clubfoot. Children can be cruel. It must have been difficult.

Vikas Khanna: I've never participated in any activities, sports or anything. My shoes were very big and extremely heavy with the braces. When I walked into class, I felt that it was like thunderstorms. I'd just sit at the back of the class and not move until the end of school because when I walked, it gave everyone a chance to laugh.

But I could laugh at them when I would cook as a child. I felt that cooking was something which made me equal to everyone else. It filled that gap of not being equal physically in some way.

LRK: At 17, you had your own catering business.

VK: I love that you said "catering business." My father used to say, "You should call it catering charity" because I never made money. It was something very simple for me, my grandmother and my mother.

VK: I decided in 2000 to come to America because I had read this book Jonathan Livingston Seagull, Richard Bach's book.

LRK: About flying above.

VK: Flying seemed to be something so impossible when as a child you never could walk properly. That book was the main reason for me to come to America. I know this sounds really ridiculous to some people.

It's almost a 70-page book; it's not a big book. It's about this seagull who wants to fly higher. Everyone says, "This is not how we do it." That book really pushed me. He wanted to fly, and there was no higher city or no higher space or state than New York City to come. My brother said, "If you fail, you'd rather fail in New York City." I just love it.

LRK: You arrive in the U.S. Did you have a job?

VK: No, nothing. The only space where I wanted to work was restaurants. This is pre-9/11. The world was a lot different. But survival and resilience are something that New York teaches you like no other city in the world.

I went to the Upper West Side to a small restaurant. I went and asked them, "Can I help you in some way?" They said, "Fantastic. We need a dishwasher. It's going to be Christmas. It's going to be really busy."

LRK: The whiskey. They must've been very surprised when you suggested chicken.

VK: I kept telling them, "It has Indian spices. It has red color." The owner said, "Would you just leave right now?"

LRK: But there's a point where you ended up with $3 in your pocket.

VK: I still celebrate my Christmas at the New York City Rescue Mission because it reminds me of the space and time where I lived during the 2000s in winter at Christmas. You couldn't get a telephone at that time without a Social Security number, so I didn't have a phone. They didn't inform me that I was working part-time, so I had to stand in the line at New York City Rescue Mission. They said, "Welcome, and merry Christmas."

I thought that was a message for me that if Jonathan Livingston Seagull gets tired, there's a space for that little bird. Just sit there, rest and breathe. It's so visually clear in my mind what I was going through. We live so many days in our life, but there are few moments which are such strong impressions on our memory and head.

On making a birthday cake for the Dalai Lama

LRK: I remember you talked about how you met the Dalai Lama the first time.

VK: I'm going to share something amazing with you. On Dalai Lama His Holiness' 80th birthday, I made a cake out of very thin breads, which I learned how to make in Tibet from his hometown. I laid those breads thinly. I do all my stuffings and everything. I make a beautiful cake and I take it to him.

I put 80 candles on it. I said, "His Holiness, you can blow out the candles." You know what he tells me? He says, "In Buddhism, we don't want to cut off something's life to wish for our long life. I can't blow out a candle."

So imagine 80 candles on a cake. The wax is melting. He takes every candle individually outside. He didn't blow out the candles. I thought it was so beautiful. I never thought of that perspective. I won't forget that.

On his vegetarian Thanksgiving menu

LRK: This is a time of year for us, here in America, for giving thanks. We have our Thanksgiving feast. Can you give us an idea for a Thanksgiving menu that you would do, a vegetarian menu of your food?

VK: Sure. When you're doing a book, you're always figuring out you have to make it more seasonal in some ways for people to understand what they can enjoy in certain parts of the year.

Then you dry-roast it -- put it in the oven. It's great because you can just put it in the oven when you're expecting guests. You have this thing without too much work cooking in the kitchen. You spend that time with family and friends.

Then I have this dish which is roasted eggplant and basil pilaf. It's very simple. Take an eggplant, cut it into a small dice, about half an inch or 1 inch by 1 inch. Then you combine a little bit of olive oil, balsamic vinegar, oregano (if you have it fresh, fantastic, or dried oregano works), and a few chili flakes. You toss everything together with salt, then you cook it in the oven. This is very simple.

On the other side, what you do is you can cook basmati rice in open water, then you can drain it. It's very simple. It's 15 minutes to cook basmati rice. Toss it with the eggplant, then finish it off with fresh basil leaves. I think it's a quite easy recipe, and it can be done in advance. That is something which is very important.

One dessert which I think is very interesting in this book is the persimmon vanilla cobbler. A lot of us buy persimmons during the fall. We do not know what to do with it sometimes because we find it's too hard, or sometimes too astringent. But persimmon is a fantastic fruit because of its fantastic form and texture.

You cut the persimmon. You toss a little bit of vanilla, a little bit of flour and a pinch of sugar if it's not very sweet, and layer it in a pan. Then you can make a nice cobbler crust. It is just flour, butter and sugar, but I also added some sliced almonds. Toss it, layer it, bake it. Very, very simple -- just two steps to make a fantastic dessert for Thanksgiving.

It's the best time of the year.