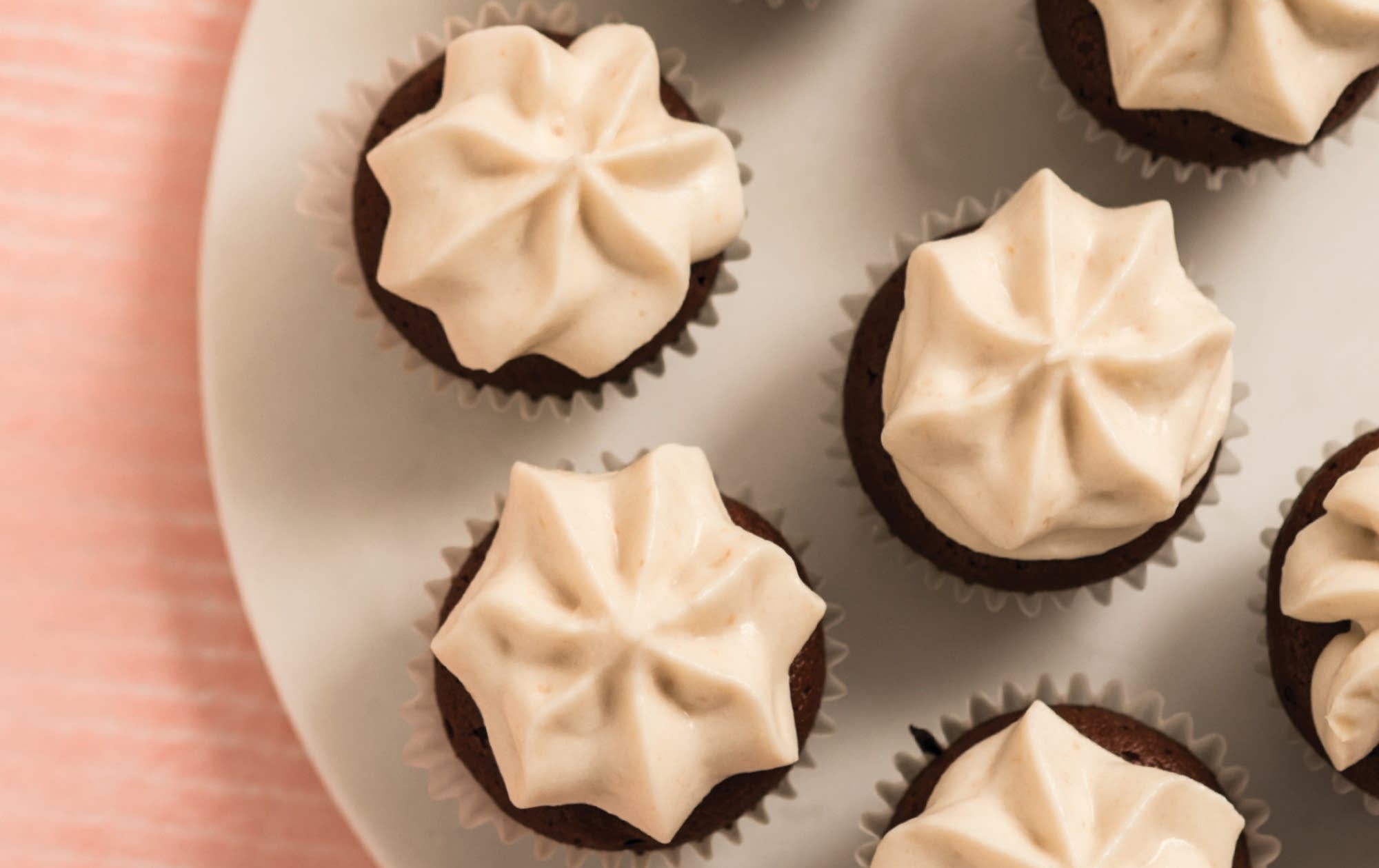 Most chocolate cupcake recipes call for only cocoa powder, but I use high-quality melted chocolate in Kyotofu’s version. I find that it imparts a much more potent and nuanced flavor than cocoa alone (and if you’re going to eat chocolate, you might as well really go for it, right?). But the real secret to these cupcakes, which were once ranked the city’s best by New York Magazine, is miso: the salty, buttery paste intensifies their chocolate flavor in a big way.

1. Preheat the oven to 325° F / 163°C. Melt the chocolate, butter, and miso in a double boiler set over simmering water. Once melted and smooth, transfer the chocolate mixture to a large mixing bowl.

2. In a separate medium bowl, sift together the confectioners’ sugar, flours, cocoa powder, baking powder, and salt. Add the melted chocolate in several additions, mixing constantly. Whisk in the eggs one at a time.

3. Prepare a cupcake tin by lining the molds with cupcake liners. Divide the batter between the cupcake molds and bake for 18 to 20 minutes, or until a cake tester comes out clean. Remove from the oven, let cool, and serve frosted with Shiro-An Cream.

Shiro-An, or white bean paste, is an arch-traditional Japanese dessert ingredient frequently found in wagashi (it’s typically homemade, and very difficult to find in stores). This recipe combines it with whipped cream to create a silky dessert topper with a bit more body – and protein! – than whipped cream alone.

1. Wash the beans in running water and then soak them, covered by at least 2 inches / 5 cm of cold water, overnight.

2. Drain the beans, transfer them to a medium saucepan, and cover generously with cold water. Bring the water to a boil over medium heat, reduce to a simmer, and let the beans cook for about 30 minutes, or until they are tender. Drain.

3. Puree the beans in a food processor or blender until smooth. Meanwhile in a medium saucepan over medium-high heat, combine the sugar with 2 tablespoons water and bring to a boil. Once the sugar has dissolved, reduce the heat to medium and add the bean paste in four to five additions, making sure to incorporate the syrup and bean paste well after each addition. Once the mixture is smooth, remove from the heat, strain through a fine mesh sieve, and let cool to room temperature. Measure out 1 cup / 340 g; reserve any remaining shiro-an for another use.

4. In the bowl of an electric mixer fitted with the whisk attachment, whip the heavy whipping cream and vanilla extract until soft peaks form. Add 1 cup/ 340 g of shiro-an in several additions, continuing to whip until stiff peaks form and all the shiro-an is incorporated. Use immediately.

For a Matcha Variation: Mix 1 tablespoon matcha powder into the shiro-an before adding it to the whipped cream.

For an Azuki Variation: Mix 45 grams (3 tablespoons) azuki bean paste into the shiro-an before adding it to the whipped cream.

Reprinted with permission from Kyotofu © 2015 by Nicole Bermensolo, Running Press, a member of the Perseus Books Group.