To fight a food desert, this Dallas college turned its football field into a farm

by Lynne Rossetto Kasper
Listen: To fight a food desert, this Dallas college turned its football field into a farm
06:39 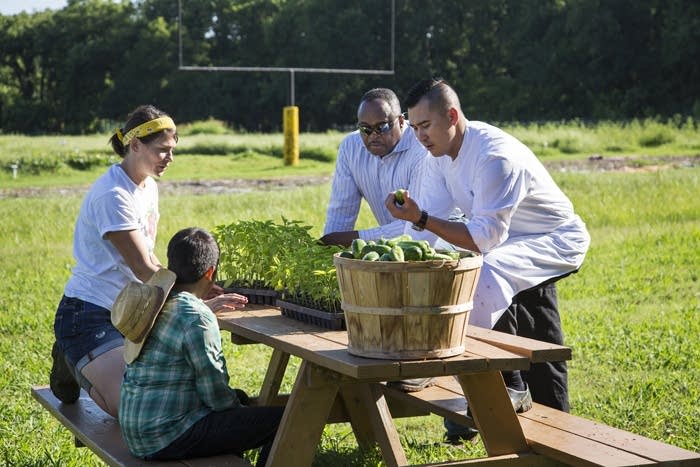 Photo: The We Over Me Farm

Paul Quinn College was in the middle of a food desert. Its football team kept losing -- badly. So in 2010, the Dallas college decided to transform its football field into The We Over Me Farm. As you can see in our video above, the school even left both goal posts and scoreboard standing.

Since then, the farm, which is managed by student-employees of the college, has produced more than 30,000 pounds of organic produce. Michael Sorrell is the college's president, and Chanson Goodson is a student and the farm's student education coordinator.

Lynne Rossetto Kasper: Football is usually a rallying point for colleges, alumni and for fundraising. You've turned a football field into a farm. Where did the idea come from?

Michael Sorrell: It came really from two places. One was we were in a food desert and we weren't getting the kind of support necessary to change that. We decided we needed to do something about it. The second was we wanted to disturb this notion that the only way out of poverty for African-American males is by being athletes. We love sports, but the business of sports and the businesses associated with sports are far more important than just being athletes.

We spent several years working to attract partners, to open up stores, restaurants and grocery stores in the neighborhood. Everyone turned us down. We even went so far as to offer free land to any grocer that would build a grocery store and employ some of our students and people from the community. No one took us up on it.

The straw that broke the camel's back was when a grocer said that the people in that neighborhood didn't look like their customers. We got angry and we decided to take matters into our own hands.

We think that in life, people spend far too much time thinking about what they don't have and not enough time about what they do have. What we did have was a plethora of land that was capable of transforming not just the community, but also the college and all points in between.

LRK: How did people react? Football is one of the heart-and-soul aspects of college life, isn't it?

Chanson Goodson: I guess the easiest way to say it is that we were never victorious in our triumphs.

MS: In other words, we lost every game.

LRK: What do you do at the farm?

MS: But you're unbiased on that front.

MS: We're a work college, so our students are assigned work stations. The farm is one of the larger work stations that we have in the work college. It becomes a part of the overall curriculum of the institution because of our focus on entrepreneurship and teaching them to look at what's possible through relationship-building and through offering great products through great partners.

LRK: Where do the crops go?

MS: Part of what we do with the crops is sell them to some of our clients. Our largest client is Legends hospitality with the Dallas Cowboys. If you go to a Cowboys game and you are eating in the suites, you may very well be enjoying some of the produce that we have grown on the farm. We also sell some to area restaurants. The Green Grocer carries some of our products.

CG: We donate almost 25 percent of our produce to the North Texas Food Bank so they can give it out to the community. Then we also work with a church near us called Mt. Tabor. They have a food bank day.

MS: We think it's incredibly important that we never lose sight of why we created this opportunity in the first place. It was to disturb the food desert conditions in our neighborhood. We call the program where we give food to the community "tithing to the community" because it's consistent with our faith-based principles.

LRK: Chanson, how is this going to figure into your future once you graduate?

CG: It gave me a different avenue to take. I'm in school currently for legal studies. As you know, law is everywhere. I found out that I'm more interested in agricultural law, trying to fight for small farms and ranches. I've had a conversation with one of my staff members at school; they wanted me to be a farm lobbyist because I like to deal with things in a political sense. Even though I do like being hands-on, I like to make sure the problem is fixed instead of putting duct tape on it. I would like to actually mend the problem.

LRK: I'm just thinking of all the places we have too much duct tape in our lives at the moment.