by Jennifer Russell
Listen: The Sioux Chef is 'helping bring a Native American food culture into the modern world'
08:48 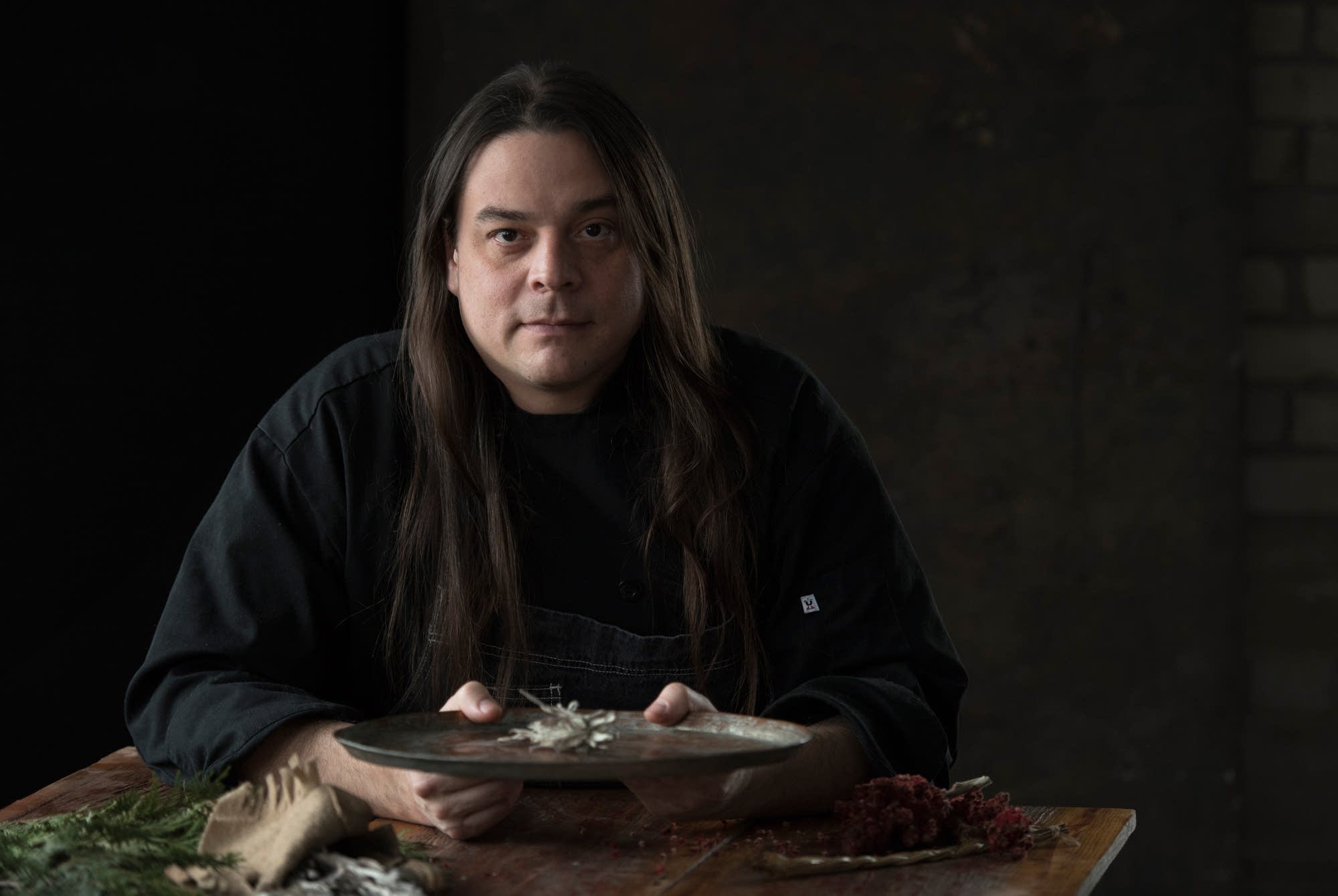 Chef Sean Sherman grew up on the Pine Ridge Reservation in South Dakota. His business, The Sioux Chef, specializes in Native American food -- specifically the pre-reservation foods of the Dakota and Ojibwe people who lived on the Great Plains. "I'm trying to really stay true to a lot of the indigenous ingredients as much as possible," he says.

Jennifer Russell: How do you define your food?

Sean Sherman: I am specializing in Native American food, but particularly I'm specializing in the Dakota and Ojibwe food from this region. Even though I grew up on Pine Ridge Reservation in South Dakota (I'm Lakota), I wanted to really focus on the regionality of it. Since my business is here in Minnesota, I wanted to focus on just Dakota and Ojibwe.

I started cooking at a really young age. After I moved off the reservation, I moved to the Black Hills. I started working in tourist restaurants when I had barely just turned 13. I've been in restaurants for quite a few years. I'll be 41 in a little bit. It's definitely a lot of time in the kitchen. It has become a passion over the past few years.

JR: Can you talk a bit about Native American or indigenous foods, pre-reservation?

SS: When I came out, I was focusing on pre-reservation foods. Meaning: I wanted to know about all the food systems that people were utilizing in this region. People had survived here for thousands of years. There was lots of great food -- it's obvious with all the food that's in the forest and in the lakes. The proteins in the meats are easy because it's just the wild animals that are out there.

For me, it was a longer study in ethnobotany: what plants are indigenous and were growing around here, how Native American people were utilizing things, understanding Native American farming and agriculture, because it was such a huge scene especially in this region. And understanding how food preservation systems were working for people to maintain and keep a lot of food in their food caches to last them through the long winters.

For me, it was basing my food, my pantry items, on those pieces -- the dried corn, the dried beans, the dried wild rice and all the varieties of all of that. When they were making things into meal and powder, all the different dried vegetables that were utilized. Those were the base flavors for me to really think about using in this region.

It really shows how regional and diverse the U.S. is, because all these micro-regions of Native American cultures had different food systems slightly. It's even different from Dakota down here, to Ojibwe in the north, to the Lakota where I grew up. It's definitely diverse, completely across the board, if you start looking at other regions.

JR: How did you learn about and gather all of this information about these pre-colonization diets and ingredients? It wasn't like there were a lot of written records, I would imagine.

SS: When I first started researching, I found there was very little information. I had cross-studied Asian food systems a little bit. I realized if you're studying Eastern medicine, just how medicine and food is all combined. It was really the same way that Native Americans were looking at their food bases, too, because all this food was medicine also. It had different properties for different pieces. I knew there was a large base of what wild plants were used for, what wild roots were used for. I just wanted to search for that.

It just set me on a long path of research for quite a few years. Reading through lots of ethnobotany books about the plants and indigenous plants of these regions. Reading a lot of history pieces looking for first contact accounts of Europeans, of what they're seeing. Unfortunately, a lot of times they would just talk about what men were doing. They didn't really break down how the women were processing everything. That was the really important part.

There are luckily a few accounts here and there of some really good volumes and books that really had a big window for me to look at. Because as a chef, I was just really looking for food, flavor and technique, slowly piecing it together. It's like taking a big broken pot and slowly putting it back together, piece by piece, until I can see a bigger image of the whole thing. I'm still learning a lot as I move forward with it.

JR: What did you discover about the foods they were growing and gathering on the Great Plains at that time?

There are a whole bunch of these old heirloom varieties that you find on farms like around the Twin Cities today, like Wozupi or Dream of Wild Health. They are slowly growing some of these heirloom varieties that have been in these regions for a long time. It can get them back into the food systems and especially back onto some more traditional Native American tables.

The meats were easy because there's venison, there's duck, there's bison, there's rabbit. There is also squirrel, muskrat and things like that. And all the river fish: the walleye, the trout, whitefish, northerns. There were quite a few options out there.

There are tons of flavors. There is so much fruit and there are berries that grow. There are so many roots. There are wild potatoes. There's wild ginger. There's so much food around us.

I use a lot of tree food, too. I use a lot of cedar, fir tree, pine and spruce -- not only for teas, but for also just seasoning.

I modernize the food some, but I try to keep it really minimalist style in cooking. I'm only using a few ingredients. I'm not using any of the processed sugar, no flour, no beef, pork or chicken. I'm trying to really stay true to a lot of the indigenous ingredients as much as possible. I might add a few organic vegetable pieces here and there, but for the most part I'm probably hitting 95 percent indigenous options on the menus that I build.

JR: Can you talk about the role of preservation in Native American cuisine?

SS: During harvest season, especially around the farms, it would be a huge deal. They would build this mass scaffolding just so they could sun-dry all the corn and squash. It would be quite a ways above ground. They would have small fires set below so you have heat coming from below and a little bit of smoke.

But sun-drying and smoking were the best ways to preserve. It was such an important way, because that was able to keep foods for quite a long time, throughout the winter season definitely. If you read books like Buffalo Bird Woman's Garden, she plots out how they built these old food caches and how they laid everything out. They would make quite a few of them, almost like one per month throughout the winter season, to break into. Food preservation was extremely important.

JR: All of this has led to more than just cooking for you. What's next?

SS: I think my ultimate goal would be to help set up some kind of Native American training center. I can envision having a center -- almost like a cooking school -- that would teach people an education on Native American farming, foraging, preservation techniques, salt-making processes, the different styles of cooking with fire and the different styles that people were traditionally cooking like clay cooking, earthen oven cooking. Of course, an education of just processing all the different kinds of foods that were being harvested, whether through agriculture or through foraging. And be able to give basically a Native American cooking degree to students or do an adult outreach education so people can come in and learn. Just helping bring a Native American food culture into the modern world.

Jennifer Russell is a founding producer at The Splendid Table. Before coming to radio, she made historical and arts and cultural programming for public television. She claims to have come out of the womb a food lover -- when other girls played house, she played restaurateur. Follow her comings and goings on Twitter: @jenejentweets.