If you want light, tender scones, don't overwork the dough 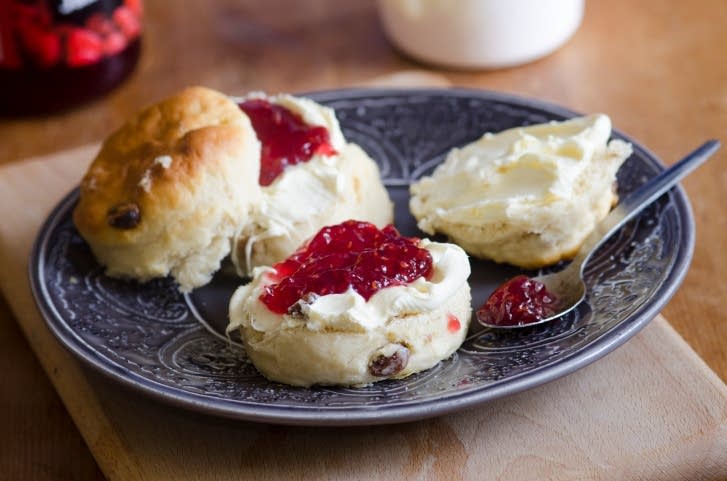 Edd Kimber, author of Patisserie Made Simple, shares the proper way to make a scone.

David Leite: We think of scones as British, but where do they come from?

Edd Kimber: They are definitely British, but there is a debate about where they actually originate from. A lot of people will say they come from Ireland. People here would assume they come from the South, so either Devon or Cornwall, mainly because they are so associated with that part of the country.

But there is also one other argument. There's a place in Scotland called Scone Palace, which is where traditionally our monarchs went to be crowned king or queen. Because the name is exactly the same, there is a theory that they also come from there. They are definitely seen as a Celtic thing.

DL: How about American scones versus British scones?

EK: The way I think of American scones is that they've taken the very humble British scone and they've added elements to make it not better necessarily, but a little richer and more extravagant with buttermilk and lots more tasty ingredients like chocolate or blueberries.

DL: When would you eat your humble version of the scone in Britain?

EK: It's definitely an afternoon tea kind of thing. If you went to afternoon tea at any hotel in this country, you'd be guaranteed scones. They would come with jam and clotted cream.

It isn't something you necessarily have as a dessert, but it's not a treat either. It's something more everyday. It's not that sweet and it's not filled with heavy butter, creams or chocolate. It's a lighter product.

EK: I think to Brits scones are almost the same thing. They're stuck in the head as the old-fashioned, the classic. You can find savory scones, but they are much, much rarer. Apart from a cheese scone -- you can find those in supermarkets -- generally you don't see savory scones very often. That again is more of a riff on the classic.

DL: You have a version of the savory scone don't you?

EK: I do. I quite like the American style of scone just because it gives you good flexibility. You can almost put anything into it. I do a lot with cheese and ham, and you can put mustard in there. If it sounds like it will taste nice, you can put it in a scone. You can play around in all different ways.

EK: They're so simple in the ingredients; it would be flour, sugar, salt, butter and then some raising agent, some baking powder. Really simple. And then milk, maybe an egg. Egg tends to make it slightly richer.

But for me, the key to the texture of a scone is that it should be really, really light and tender. That comes from how you make them. Anyone who baked as a child was always taught by their mom or their grandmother to make a scone, you have to have a really light hand. You don't want to work the dough too much; it ends up making it tougher.

The way I learned to make scones originally was from my mom. That's how I started baking, full stop. I was on a show in the U.K. called The Great British Bake Off, which is starting to air on PBS. When I finished the show, I was very lucky to be invited to go and work in a kitchen in a restaurant called Le Manoir, which is a two-Michelin-star restaurant. It is run by a chef here called Raymond Blanc, who is one of those chefs to the U.K. who's been around forever. Everybody knows him. He is a very well-regarded chef.

I worked in that pastry kitchen for a few weeks, and I learned some very different techniques from how most people at home make them. Generally you would rub the butter into the flour, kind of like you're making pie dough. You'd rub it in until it resembles a bread crumb mixture, which is the same. But you would then, very briefly, bring it together into a dough, and you would stop touching it as quickly as possible. Then cut out your scones.

But the way I was taught was using a technique called "chaffing." I'm still not sure if that's the true word for it.

DL: What is that?

EK: It's a type of kneading, but it's the lightest possible kneading you can do. You're not stretching the dough, it's more of a fold. You're trying to incorporate a little bit of tension into the dough and also lots of air. Then you cut out your scones as you would do normally. But then you leave them to rest for about an hour.

It's a hotel technique. It gives you a different look. Because you allow them to rest and you've given them this light knead, they start to ever so slightly spread and get a rounded side. It looks just a little more refined. It's slightly a trickier technique. It goes against a lot of the rules I was taught as a kid and a lot of other people get taught as children on how to make them. It gives you a very professional, polished look to them.

David Leite is the publisher of the website Leite's Culinaria, which has won two James Beard awards. He is the author Notes on a Banana: A Memoir of Food, Love, and Manic Depression, as well as The New Portuguese Table: Exciting Flavors from Europe's Western Coast, which won the 2010 IACP First Book/Julia Child Award. Leite also won a 2008 James Beard award for Newspaper Feature Writing Without Recipes, a 2006 Bert Green Award for Food Journalism, and Association of Food Journalists awards in 2006 and 2007.
Herbes de Provence Loaf
Roasted Veggie Bowl with Green Goddess Dressing
Tinned Scallops and Kelp Pesto
Sheet Pan Chow Mein