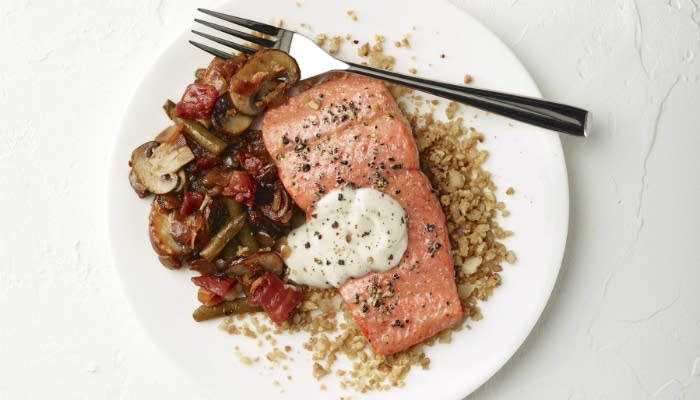 It’s 6 p.m., hunger has taken over, everybody’s cranky, and there are only odds and ends in the refrigerator. Enter Lynne Rossetto Kasper, host of public radio’s The Splendid Table, and her culinary supper game, Stump the Cook.

How It Works: You tell us five ingredients you have in your refrigerator, and Lynne has to come up with a dish you could make with them. In her dish, Lynne also gets to use salt, pepper, one type of fat and three additional ingredients the challenger also has on hand.

This Month's Player: Aaron Cotkin is a graduate student in San Diego. He loves to cook, but because he has so little time, he leans heavily on the slow cooker. He and his roommate have bonded over food-oriented reality TV — Chopped, Iron Chef America and Anthony Bourdain: No Reservations.

The Path: Defrost the salmon and the rice balls. Preheat oven to 350 degrees. Season 1 cup of the yogurt with salt and pepper and set aside.

For the chutney: In a large skillet, heat 2 tablespoons bacon fat over medium heat until melted. Add sliced mushrooms and one chopped onion. Cook until the mushrooms are very crisp. Add one large chopped tomato, one drained and dried can of green beans and 1/4 cup raisins. Return to a simmer, reduce heat and cook until thickened. Set aside.

For the salmon: Grind the peanut rice balls into crumbs in the bowl of a food processor with a tablespoon of vegetable oil. Heavily season the salmon with black pepper and place on a baking sheet. Pack the rice ball crumbs around the salmon filets and bake at 350 until the fish is tender and rice crumble is crispy. If the rice crumbs need more crisping, broil until nicely browned.

To serve: Place a salmon filet on a plate, with the browned rice crumble and a scoop of chutney alongside. Garnish with a dollop of the seasoned yogurt.

Aaron's Response: “Not to say that I doubted Lynne, but I thought some of her flavor combinations were out of my comfort zone. But it turns out I loved the raisin-onion-mushroom-tomato combo.”

This Stump the Cook was produced in collaboration with the newspaper magazine USA Weekend.