To change food culture in the U.S., does the messenger matter?

by Lynne Rossetto Kasper
Listen: To change food culture in the U.S., does the messenger matter?
09:29 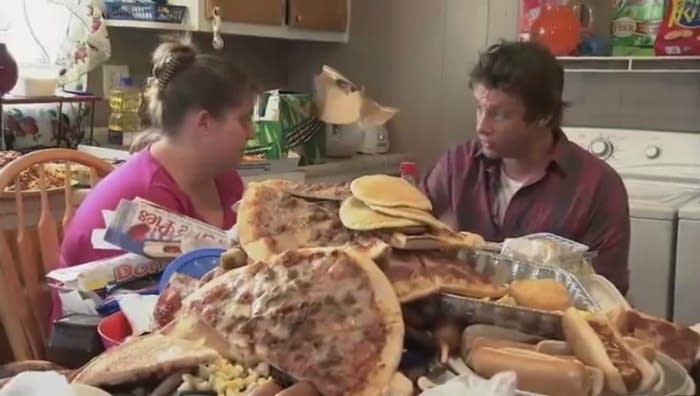 In 2010, the British chef Jamie Oliver did a TV series about Huntington, West Virginia, called Jamie Oliver's Food Revolution. Huntington had been named the unhealthiest town in America by the Centers for Disease Control and Prevention. In the series, Oliver set out to change how the entire city ate, especially targeting school lunch.

Jane Black, a food writer, and her husband, Brent Cunningham, deputy editor of the Columbia Journalism Review, wondered about the show's aftermath. They are writing a book about how to bring a healthier food culture to middle America.

Lynne Rossetto Kasper: You two wrote a book proposal just before your wedding. When you came back from your honeymoon, you had a contract. You went to live for 7 months in Huntington. What did you see as the aftermath of the Oliver project?

Jane Black: People in Huntington across the board were very interested and concerned about what he was doing. But the place that the show focused probably the most was in the schools. There he went in and was shocked and horrified that they were eating breakfast pizza and what he called luminescent strawberry milk. He tried to get them to start cooking from scratch. He said it didn't really matter that the food met the guidelines of the USDA as far as nutrients were concerned, but it wasn't fresh.

Of course what people saw on TV were the school lunch ladies being furious about this and feeling like he was stepping on their toes. They also saw the kids taking those lunches, which are paid for by taxpayer dollars, and dumping them in the trash.

What happened in the aftermath was really interesting. After he left, they were audited by the USDA, who came in and said, "These meals may be fresh, but they don't meet our requirements for nutrients." The head of school food, Rhonda McCoy, basically could have gone back to the way she'd always been doing everything. Even though on the show she came across as this cold, aloof bureaucrat, clearly the message had gotten through.

What she did over the next summer was redevelop the recipes, change the flavors a little bit. For example, she took some of the garlic out of his garlicky greens so that the kids liked them better. Within a year they were basically cooking all their meals from scratch.

I went down there. In this kitchen that any New York restaurant would be happy to have, there were 10 cooks making chicken, rolling it in a spice blend, baking it in the oven, taking potatoes, cutting them up, putting them in olive oil and roasting them in the oven. The meal that I ate there included a salad that had lettuce from a student farmer. It was incredible.

What's even more amazing is that since then, Cabell County, the county that Huntington is in, has trained I think 52 of 55 West Virginia counties to do the same. I would say West Virginia, which is not known as a very progressive state, probably has one of the best school lunch programs in the country.

LRK: The kids are eating the food?

JB: Absolutely. High school kids are never going to say they like school lunch -- it's not cool -- but they ate it. I didn't see a lot going into the trash can. Having reviewed my share of four-star restaurants, I can tell you it's pretty good.

LRK: That's really the goal of that project, right?

LRK: But you two talk about the fact that you see a much larger problem behind school lunch, the obesity problem and the health problems that we have in the country.

Brent Cunningham: Yes, I think we put a lot of pressure on schools to fix all our problems, but I'm not so sure that's the right way to think about this.

I grew up an hour from Huntington and I went to college there, so I know it fairly well. But it's a largely white, working-class city. It's where the Rust Belt and Appalachia meet. For the last 40 years, it has struggled to figure out what it is in the post-industrial world.

You have an audience there -- people who aren't necessarily poor, they're certainly not rich, they have some disposable income. In other words, they have the wherewithal to use their time differently and to make different choices around food, but they don't see the importance of it; they don't see the value of it. I think this is what people who want to fundamentally change the way food is produced and consumed in America are going to have to confront going forward, because there are a lot of people like that around the country.

LRK: There's something that's always bothered me. It's that business about "we know best, we know that local is better, that organic is better." It's pretty arrogant when you're on the other side of that.

BC: First of all, I think we should just make clear that both Jane and I are part of that movement. A lot of our friends are activists, chefs and food evangelists, all these sorts of things.

You're talking to people who have a whole different set of priorities when you get out into a place like Huntington. And yes, I think there's a certain resentment of people on the coasts or people who are perceived as urban elites telling you what to do, whether it's what to eat, how to drive. The whole country is enduring an anti-regulatory period, so this gets rolled up into all of that. It becomes part of the culture war.

JB: I think what you're picking up on is this moral tone. When you look at the history of attempts to change the way Americans eat, back to Sylvester Graham in the 19th century, it was always a moral crusade. It never worked because people don’t like being talked to like that. What we argue for and what we think is really important is to take that piece of it away and help people to understand why they want to do it, not why they should do it.

BC: A big thing that we talk about in the book is that the messenger matters. There's a lot happening in churches around the country with food and diet.

LRK: Really? I didn't realize this.

BC: Absolutely. And not just at liberal congregations, although as you would expect, that's where it began. But it's spreading to conservative churches.

The church in our book is an evangelical Baptist church. The pastor is a fairly progressive guy in a lot of ways. He's the son of a United Mine Workers official. He really sees this as a class war. This is still a very religious country. Again, in New York and perhaps in Minneapolis and St. Paul and the urban centers around it, it's sometimes hard to remember that. But it's a very religious country. The pastor has a lot of influence where people like us, Michael Pollan, you, they wouldn't listen to necessarily. I think that's one way that you start to make this important to people.

JB: To some extent, some of this is all perfectly obvious. And yet what we find frustrating is that the leaders in the food movement continue to batter us with these grim statistics about the environment and our health and obesity. It's all so miserable and awful and doom and gloom. They do this without realizing that the people who they're trying to reach are just tuning out.

BC: Even if it's not a situation where they don't believe it, it gets lost in the flurry of daily priorities.

JB: We have a 2-and-a-half-year-old. When we were living in Huntington and cooking all of our meals from scratch, we didn't have a 2-and-a-half-year-old. Boy does that change everything. The amount of time, energy, planning and skills that it requires to ask Americans who are used to inexpensive and convenient food to do that is just not going to work.

Along with talking about messengers, we're very interested in how we can make healthier food that people like to eat convenient. We're all for frozen foods -- not full of junk and unpronounceable ingredients -- but good frozen foods that you can pop in the microwave and feed your kid for dinner. There is nothing wrong with that.

BC: To the extent that the movement makes you feel like there is something wrong with that, that's a real problem.