by Melissa Clark
Listen: A cheesemonger's advice for pairing beer and cheese (plus 5 combinations to try)
06:28 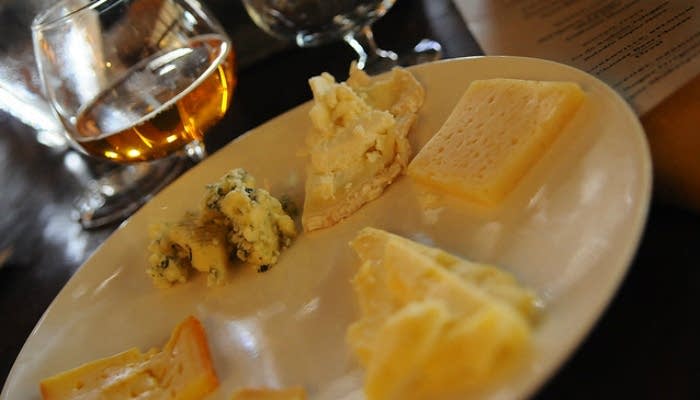 Have you ever tasted summer wheat beer with a young, creamy Stilton? If you pair an unexpected beer with an equally unexpected cheese, you head into new taste territory.

Melissa Clark: When most people think about pairing cheese with a beverage, they automatically think about wine. But you're espousing beer.

Steve Jones: I definitely think beer is a better beverage than wine for pairing with cheese for a couple of reasons. The effervescence will keep your palate lively; bubbles can keep scrubbing your palate so you can taste more and longer.

Also, it's a grain-based beverage; with cheese, obviously the animals eat grains too. I think there is undeniable terroir between those two. If you taste a cheese and a beer together, the cheese will really pull up the grain bill in the beer so you can imagine the grains that the brewers have used. It really pulls out the different grains.

Summer is the best time for pairing beer and cheese

MC: Most people don't think about the fact that cheeses are seasonal. You get some cheeses at some times of the year and the same thing with beer. Is there a moment in the year when they both come together?

SJ: Summertime is great for a couple of reasons. One being all of the animals have had the kids, the lambs and the calves, so their milk is back into cheese production. The animals are on really rich grasses, so you're getting these really beautiful summertime cheeses.

Since it's summertime, who doesn't want to drink beer when it's warm outside? I think it's a perfect time for beer and cheese to be together.

MC: What are some of the other things that you consider when you're pairing beers and cheeses?

SJ: The three things that I think about mainly are the regionalities and then comparative or contrasting.

With comparative, I'll take a beer that is tangy and acidic, and I'll pick a cheese that has got that same tanginess. Like a goat cheese and a saison for example, where you're playing off the acidic notes of those.

With the contrasting, it's more like an imperial stout with triple creme, where you are taking roasting notes and you're mellowing it out with bigger, creamier notes.

MC: You talked about acidity in terms of like flavors. Will that also work with two big flavors? For example, imperial stout with a mild triple creme -- is there something that will stand up to it that will work?

SJ: The other way that I would come at it with a really big flavor like that, I would put it up against a blue cheese or something. You're matching; you're doing a comparative again where you are bringing two big flavors to the table.

People always want to pair IPAs and they're difficult. You have to bring a big flavorful cheese; an aged cheddar, or even a smoky blue, sometimes will work really nicely with that.

MC: When you're thinking about beer and cheese, is there any cheese that you just generally stay away from that's just not beer friendly?

SJ: The hardest pairing always seems to be sheep's milk cheeses for some reason. They are always the ones that we were scratching our heads at the most.

I always think, "Manchego is going to be great with this." Quite often beer accentuates the sheepy notes that you get in manchego or in a sheep's milk cheese in general.

MC: So you've got a sheep cheese. What are you going to pair with it? If not beer, what's your answer?

SJ: The secret weapon out there is cider. Cider is probably an even better pairing device than beer is. You're seeing a lot of people start to open their eyes to how great cider is.

MC: Is this going to become the next beer and cheese thing? Are we going to see cider and beer pairings all over the country?

SJ: I think it's already starting. The geeky factor is out there for sure.

At a tasting, start with the lightest, brightest beer

MC: How would you structure a beer and cheese tasting at home? You would obviously want to start with lighter flavors and move into heavier flavors. How would you set that up?

SJ: You'll always say, "Am I going to think about the beer first or the cheese first?" You're going to have to pick one and pick the gradation there. You either go lightest beer to heaviest beer, or lightest cheese to heaviest cheese.

But in this situation, I would probably recommend to lean on the beer, lightest to heaviest -- so your lighter, brighter beers first. Then as you move up, you will also move up in alcohol. Alcohol can trump your taste buds a bit.

MC: Ending with the barley?

SJ: Exactly. Barley wines, imperial stouts or double IPAs, you're going to put them at the end. Those flavors are big, and alcohol is another thing that's hard to match against.

Jones' picks for beer and cheese combinations that work well

Melissa Clark is a food writer, author, and host of our new podcast Weeknight Kitchen with Melissa Clark. She is a food columnist for The New York Times, and has written more than 30 cookbooks including Dinner in an Instant, Cook This Now, and In the Kitchen with a Good Appetite.
Sopa de Fideo
Spicy Roasted Carrots With Avocado, Sprouts, and Sunflower Dukkah
Kisiel
Goong Goong’s Almond Cookies