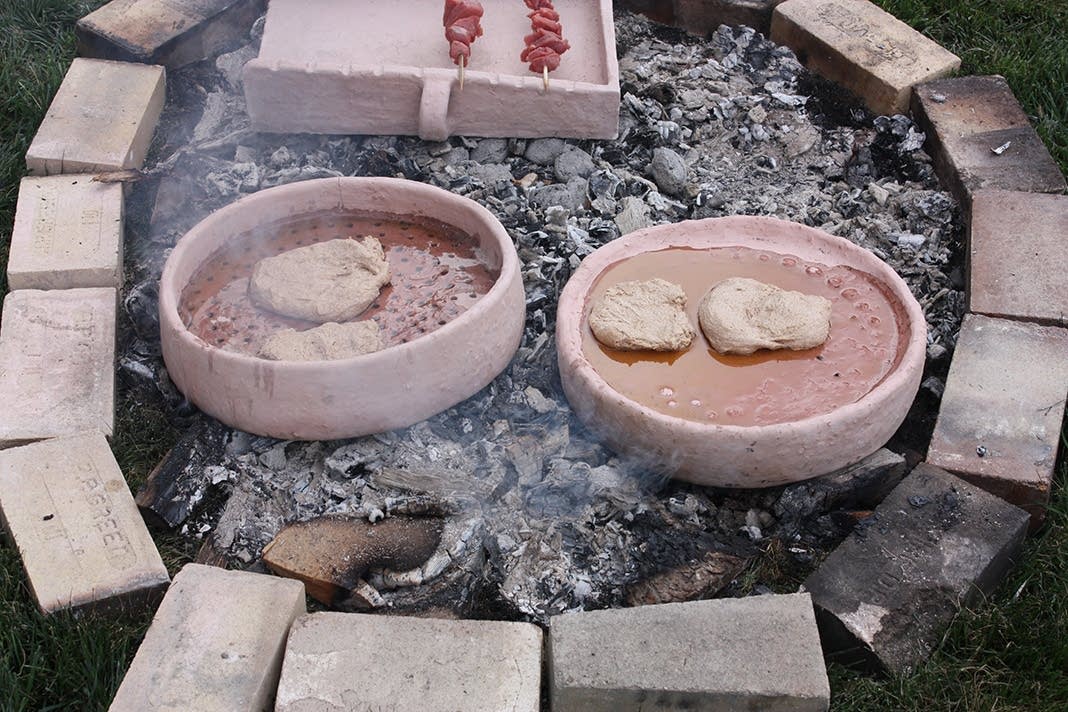 While digging through 3 1/2 metric tons of pottery stored in a Greek museum, Julie Hruby made an interesting culinary discovery: unusual cookware from around 1200 B.C. that was used in the Mycenaean palace. The assistant professor of classics at Dartmouth College who researches ancient craft production and the socioeconomic aspects of feasting explains.

Lynne Rossetto Kasper: You're looking at cooking implements from 3,000 years ago. How did you get into this?

Julie Hruby: It was an accident. I went to write a dissertation at the University of Cincinnati, and I was asked to take a look at material from about five rooms from Mycenaean palace. They happened to be the pantries, so the material there was mostly serving wares: bowls, cups, wine glasses and that kind of thing for a huge feast. There would have been enough to serve maybe 1,000 people. The obvious question was what they were eating.

LRK: Where exactly was this from? It's Mycenaean, but what does that actually mean?

JH: The Mycenaean period runs from about 1700 to about 1100 B.C., so about 3,000 years ago. The palace was in roughly modern Greece and a chunk of western Turkey.

LRK: This was a palace that had been excavated?

LRK: You had these five rooms and they were feeding 1,000 people? That's got to be mind-boggling.

JH: It's a jaw-dropping amount of pottery: 3 1/2 metric tons approximately, stored in boxes in a Greek museum. Much of it had received very little attention.

LRK: You would think that would have been something to dig into almost immediately to figure out what day-to-day life was like in the palace.

JH: It's a big palace; it had about 105 rooms, so the service quarters had actually received a lot less attention than the big ceremonial spaces.

The other distraction -- I shouldn't call it that, it was actually immensely helpful -- is that the palace had archives in Linear B, which is the earliest recorded form of Greek. There were over 1,000 clay tablets that were preserved in the fire that led to the palace's destruction.

LRK: I'm thinking in that part of the world they ate things like fruits and olives. Is there any proof of a diet that I almost think of as a biblical diet?

JH: That's not too far off. Certainly grains would have been important, and barley and figs seemed to have been staples. The tablets tell us that the rations that were given to slaves are things like barley and figs. People would have eaten lots of beans; we have remnants of chickpeas and lentils. We have remains of different kinds of grains that include barley, wheat and emmer.

People probably didn't eat meat on a daily basis -- that you would have eaten for special occasions -- beef, mutton, pork or goat. There's even some evidence for venison, that they were hunting deer.

They certainly drank a lot of wine. The palace had several thousand gallons of wine in storage at the time it was destroyed.

They'd have had fig syrup and honey for sweeteners. They certainly had cheese.

They had a few super special kinds of foods that would have been used only by very elite people under special circumstances. We know that they were importing pomegranates from the near east; there were pomegranate seeds that showed up on a shipwreck where the ship was bound for the Mycenaeans.

We have introductions of new species right about this time; things like walnut trees start to come into cultivation. There are other foods like sesame; the word sesame is borrowed from the near East. Sesame probably was special.

But we actually have evidence for a pretty wide range of different herbs and spices, things like mint and coriander.

Overall, I think if you were an elite Mycenaean, the food was probably pretty good.

LRK: You ran into something you had never seen before. What was it?

One of them was called a souvlaki tray in the original publications. It's a type that most of us I think agree was used for cooking meat on skewers. It's essentially a box with three sides, a shallow box. Along the two long sides there are little indentations along the top, and skewers would have been placed across those.

The other was a griddle. These are really distinctive-looking implements; they're big discs with perforations halfway through them and a wall around the outside. The question was which way goes up?

LRK: Three thousand years ago they were trying to get to Teflon.

Correction: This story originally said the cookware was from 1700 B.C. The cookware is from around 1200 B.C.