Coi: The restaurant that is vegetable-centric but not vegetarian

by Francis Lam
Listen: Coi: The restaurant that is vegetable-centric but not vegetarian
08:40 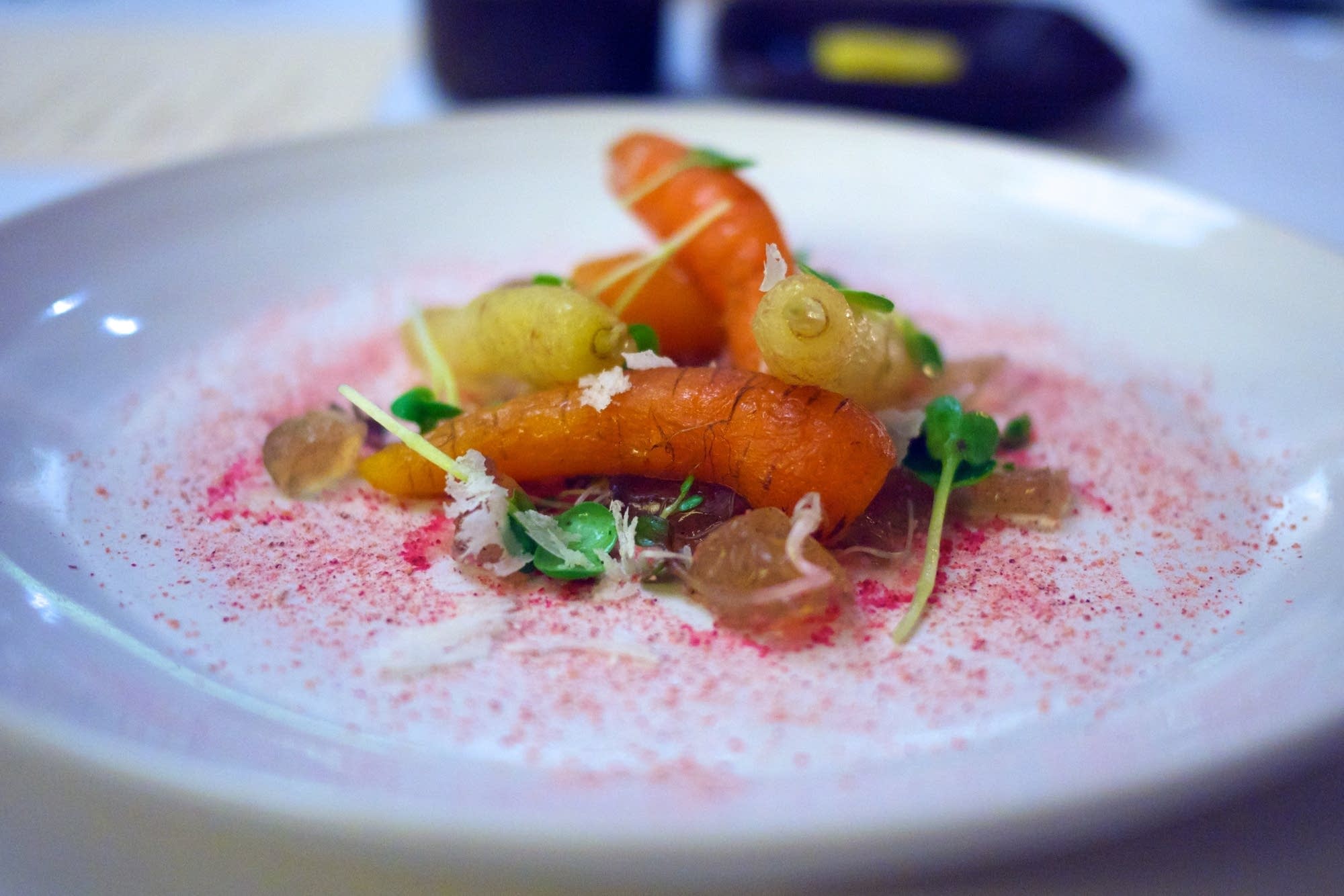 At chef Daniel Patterson's Michelin two-starred restaurant Coi in San Francisco, you will eat like a king: Eight courses, seemingly simple, but full of surprises. A bowl of grits that is really buttered popcorn. A tomato salad with olive oil frozen into a scoop of gelato. A beet shaped like a rose served with a little bit of aerated yogurt and rose petal ice.

The restaurant is vegetable-centric, but not vegetarian. "If you think about cooking as a language," Patterson says, "vegetables give you a lot more vocabulary than if you're just cooking with meat." But at his restaurant, it's a well-cooked piece of meat that really anchors the meal. Patterson is the author of Coi.

Francis Lam: The first time I came to Coi and had the tasting menu, I was so blown away by the simplicity of it, how clear the flavors were and how surprising the textures were. I remember this really wonderful beet snow with rose and this upside-down tomato tart with these super intense little tomatoes. I was so sad when it was over. I also remember realizing that after 11 courses, there were only two that had any meat or fish. Are you weaning your guests toward vegetarianism?

Daniel Patterson: I'm hopefully not weaning them toward anything except delicious food. I'm not vegetarian. I love cooking with vegetables. There's a crossover between what I like personally and what we serve in the restaurant, but it's not 100 percent one for one. I don't go in with any kind of agenda, except to make people happy, that's my agenda.

Now, for example, we have California sturgeon caviar, which is a protein; it comes from an animal. It's actually a pretty extraordinary product -- it has gotten better and better. We've got geoduck, which is a giant clam native to Washington and native to the West coast. We have lamb and Dungeness crab, which is one of our best local products. It's just a little bit of everything, everything is there for a purpose.

FL: Let's talk about the focus on vegetables: What do you enjoy about cooking with them? It seems like you're really inspired by them.

DP: Yes. It's a great question because I try to think about, "Where does this come from?" I didn't necessary grow up with it, and I didn't learn it anywhere.

When we talk about vegetables, we are talking about plants. The whole plant kingdom is so vast, so we work with wild plants. There are 100 kinds of wild sage, and the same variety in two different places is going to taste totally different. It's like being a painter and someone gives you 100 new colors that no one has ever seen before or no one usually works with. Your ability to create something fresh and new and to look at the world in a new way is vastly increased.

FL: Can you think of a dish that you've served that really makes you think, "Wow, that really shows something new about this plant."

DP: What I hope is that every dish shows a little something.

For example, in the beet dish that you mentioned, the beets are basically made to look like a rose -- they are cut in such a way, it's very labor intensive. They are served with a little bit of aerated yogurt and rose petal ice. The rose petal ice is just made like a tea. It's only five ingredients.

I personally love the challenge of making something with something really humble, and making it as exciting as if the customer was getting something foreign or a traditional luxury ingredient. Let's be honest, to make a beet as exciting as caviar or foie gras, it has got to be a pretty damn good beet.

The amount of creativity and imagination that goes into it when you're creating a little bit of a limitation … I think limitations force creativity. I've just eaten a beet that tastes intensely of beet, and yet the form is different and what it is surrounded with is different and the temperature and texture is not what I was expecting. So I get what I thought I was going to get, and something a little bit more too.

FL: There's this idea of limitation that you've brought up. But at the same time, you're also saying one of the main reasons why you love working with vegetables is because they add so many colors to your palette -- in a sense they relieve you of limitations or a sense of what a limitation might be. At the same time, you also said you wouldn't want to be a vegetarian, that there's something about animal food -- there's something about meat and fish -- that satisfies you in a way that just plants don't. What do you love about those foods?

DP: It's a much bigger conversation around vegetarianism versus omnivorousness. But even if you're talking from a deliciousness point of view, you're getting into the physiology of how your body responds to animal fats, which is very well.

So the perception of deliciousness … for example, we have on the menu right now lamb that's poached in oil that is a little bit tinged with rosemary at a low temperature. It's grilled over charcoal to finish it. The smell of that is just mouth-watering. It satisfies a certain kind craving in a different sort of way.

I feel like I could replace that, but the fact is I don't cook in a vacuum. I'm not cooking for some abstraction of what I think is a perfect meal. I'm cooking for customers -- my customers. We've tried a lot of things over the years, and I've learned what my customers like and don't like, how far I can go, and what's really important.

What I've learned is that it makes them happy to have that primal piece of meat really well cooked, well cared for, well raised, delicious. But if there's one moment of that in the meal, it's enough. It's one thing to bend people's expectations, but it's another thing to break them entirely past a point at which they become disappointed. Restaurants and cooking, it's all expectation fulfillment.

The bedrock, the most important thing at Coi that we feel: We are cooking for people. We are not cooking for ourselves. They would be disappointed if we did not have at least that one moment of a perfectly-cooked aromatic -- just juicy and almost that primal experience -- piece of meat at one point in the meal. That anchors us in a sense, and it allows us to do what we want to do for the rest of the meal. It gives us a lot of leeway.