Preserving the food of Macau -- and family recipes -- at Fat Rice

by Francis Lam
Listen: Preserving the food of Macau -- and family recipes -- at Fat Rice
08:03 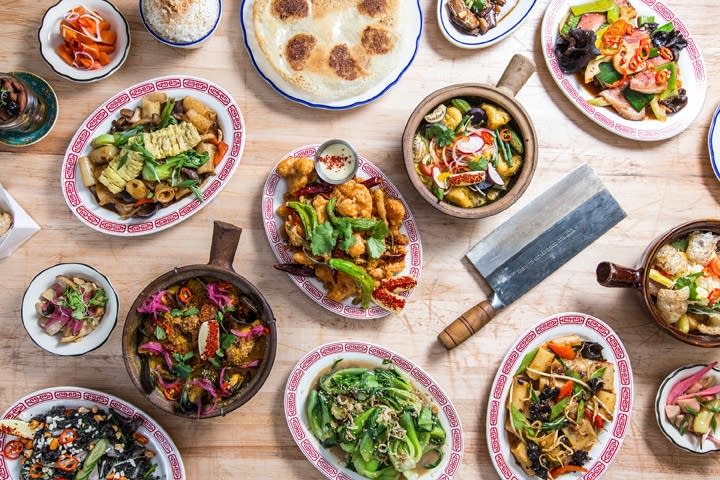 Adrienne Lo and Abraham Conlon were two chefs without a permanent home. For years they held an underground supper club called X-Marx in Chicago where they experimented with different kinds of cooking. Finally they opened Fat Rice, cooking the food of Macau, a little-known cuisine from a tiny former Portuguese colony that is now a special administrative region of China.

Macau, for all its modest size, has a culture that brings together a huge swath of the world, thanks to its traveling Portuguese colonizers. Chiles from the new world, curries from India and coconut milk from Malaysia mixed with the indigenous Chinese cuisine to evolve into something totally unique.

Lo and Conlon say Macau's food is disappearing -- and they hope to help preserve it.

Francis Lam: My wife's family is from Portugal and my family is from China, so for years we've actually joked that if we have a kid, we're naming it Macau after the Portuguese colony in China. When I heard that there was a restaurant in Chicago serving Macanese food, I was really excited about it. I was like, "Oh, I really have to go check it out."

How would you describe the cuisine of Macau?

Adrienne Lo: The food in Macau is a blending of many cultures and the history of the Portuguese through their travels. Macau was the last place that the Portuguese ended up, and they brought everything.

Abraham Conlon: They brought all their ingredients from India, from Malaysia, from Africa and from Brazil. It's the final point where all of "the discoveries" and all of the new ingredients were brought. The final addition of the Fukienese and the Cantonese ingredients and techniques really round out the cuisine to make this beautiful, harmonious, homestyle of food.

In Macau you see a couple different types of cuisine. You see the restaurant-based cuisine, which is very much a combination of Portuguese and Cantonese or Fukienese. Then in the homes and in the blue-collar restaurants, you catch more of the Malay influence and Indian Goan influence. This is a food that evolved from the home.

My thought for a lot of this, in anybody's experience if they come from a multicultural family, is: The father might have something he wants to eat. The mother might have something that she wants to eat. Then the kid is caught in between. Finally they just say, "To heck with this," and they just throw it all together. Then the kid grows up with it and says, "This is my food, this is my home food."

FL: That's how I ended up eating fried rice with Spam and canned corn when I was growing up. What are some of the dishes that really show these different influences in Macanese food?

AC: I think the po kok gai is one of the best examples -- that translates into "Portuguese chicken." Interestingly enough, you'll never find this dish in Portugal. It is essentially a chicken and coconut curry that has olives, chorizo sausage, lemon and coconut crumbled on top. It's baked in the oven to make this beautiful, bubbly casserole. It sounds like it's not going to work together, but it's a beautifully harmonious dish that is super popular at Fat Rice.

You could probably make a map with a recipe for chicken on a boat and start it off in Portugal. Then move it to Brazil, to Goa, to Africa, to Malaysia, then to China and see how it changed.

The dish that we have is piri piri chicken. It is simply a marinated and charcoal-grilled chicken with hot sauce. That's what you find in Portugal, that's what you find in South Africa. But the thing is when you get to Macau, they call it gallina Africana, "African chicken," and they actually cover it in a sauce. They not only grill it and then put the piri piri hot sauce on it, but then they put onions, garlic, ginger, tomato, possibly some coconut, and then peanuts in the sauce as well. That's how we serve it at Fat Rice, and it gets covered in that sauce.

Again, a lot of Macanese-based dishes are baked after they've cooked the initial time to get this beautiful crust.

FL: Adrienne, what keeps you inspired to learn more and to dive more into this culture?

AL: A big part of Fat Rice is preservation. We witnessed this when we were in Macau -- this culture and this food that is just disappearing. It's really saddening. It was very difficult for us to actually discover the food while we were there. We were on the hunt the whole time.

So about this preservation, at Fat Rice we do a couple dishes. We do the bacalhau, which is Abraham's great-grandmother's recipe. That's something that we're preserving.

We do these boiled peanuts that were originally my grandfather's recipe, and it's something that my dad made when I was a kid growing up. It's something that we're continuing to make because if you don't continue to make them, they'll just disappear.

FL: Some of those dishes that you mentioned aren't strictly Macanese.

FL: This is like the imaginary kid my wife and I had.