Growing up in Jerusalem, just miles apart but worlds away

by Yotam Ottolenghi and Joan Nathan
Listen: Growing up in Jerusalem, just miles apart but worlds away
09:29

Yotam Ottolenghi and Sami Tamimi lit up the food world with their sexy, delicious takes on the sometimes-controversial flavors of their childhood. They grew up in Jerusalem a few miles from each other, but politically worlds apart -- Ottolenghi in Jewish West Jerusalem, Tamimi in the Muslim east.

Their paths crossed in London, where Ottolenghi owns a restaurant group, Ottolenghi, and Tamimi is the head chef and partner. Together they co-authored Ottolenghi: The Cookbook.

Joan Nathan: I wanted to tell you that I'm just back from Jerusalem. I was there 2 days ago. I thought of the two of you growing up in that city. What was the city like to grow up in? Sami, you lived in the Old City, is that correct?

Sami Tamimi​: Yes. It was a protective life. We lived in a big house in the Old City with a view of the mosques. It was a very traditional house, an open house.

JN: Did your mother go to the markets?

ST: My father used to buy most of the ingredients for the cooking because he had connections and people liked him. I used to go. Even to buy coffee, I used to just say my father's name and they would have the special blend that he decided was the way he liked the coffee.

Yotam Ottolenghi: I think your father, from all the stuff that I hear, he was a big personality.

JN: He lived in the Muslim quarter.

ST: Yes. My grandma had a house that was very close to the Jewish quarter. I remember her saying that when she moved there as a newlywed, they actually had Jewish neighbors. Then the family grew and they had to move to a bigger house. They moved to the Muslim quarter, and they lost all their connections in the old house.

JN: But they probably traded recipes in the old house.

ST: I'm sure they did. When we wrote the book, through doing all sorts of investigations and talking to people and reading books, we found that there was so much interaction that you couldn't tell if something was Sephardic or Palestinian. They were there for 500 years or however long in the Old City living side by side with Muslims and cooking the same food. It wasn't even borrowing, it was just the culinary culture.

JN: Yotam, what was it like in West Jerusalem? It's not the Old City.

YO: Yes, West Jerusalem was different. I don't think I had as exotic an upbringing as Sami's I'm afraid. It was much more mundane.

ST: If they wanted an exotic taste, they had to come to our side.

YO: It's true. Actually, on a more serious level, that is true because Sami and I were both born in 1968, which is just after the Six-Day War when Israel took on East Jerusalem. It was all a very new world for us.

In the 70s in Jerusalem, the west, the Jewish side, and the east, the Arab side, they didn't know what brought them together. There was a slight naivety in the air. People felt -- and I'm sure Joan, you remember it because you lived in Jerusalem at the time -- it might still work out somehow. Now it doesn't feel like that anymore.

JN: Absolutely. There was a sense of hope then.

YO: Yes. There was a sense of hope and people didn't know what it meant yet, what the consequences of this massive change were going to be -- they haven't been too good. But at that point, I think there was quite a lot of interaction. We used to go to a kabob place or bakery in the Old City and sit there. We didn't dread or fear or anything.

JN: Twenty years after you were born, you were young, you were gay, you needed freedom to become you. What's it like to go back to Jerusalem?

YO: After more than 20 years, Jerusalem is a tough place to grow up in. You develop all sorts of mechanisms to deal with it. There is a lot of pressure in Jerusalem, there's a lot of God around.

JN: On all sides.

ST: It's very heavy for kids to be there.

YO: Yes. Completely. To go back is just a little bit going back in time. It sits on your shoulders a little bit to go back.

ST: You feel like it's a place that's stuck in time. Although the face of the city changed a lot, a lot of what happened in Jerusalem is behind doors.

YO: You walk into Ottolenghi and there is a celebration of food all around you. Sami and I go to great lengths to make the display look fantastic with big platters of food, mainly vegetables, all piled up with lots of colors. The platters themselves are quite beautiful. The whole display shouts abundance, beauty and color.

You find a pastry display with a similar mirrored image. There are lots of little cakes in rows, financiers, semolina cakes, orange cakes, tarts and meringues. We also tend to store our produce in the shop. As you walk in, you see both the cooked food and the ingredients we use.

JN: Did you meet there?

ST: We met in London. I used to work in a place called Baker & Spice. Yotam came there to apply for a job, and we started working together in separate sections.

YO: Sami gave me my job, more or less. I came in because I liked the look of the place. It had a very unique look and everything was very artisanal and delicious, obviously because Sami cooked it.

I walked in and his work counter was at the back of the shop, so he was the first person that I'd seen. I asked if I could apply for a job. He said, "The manager is not here, give me your CV."

I gave him my CV. Then we just started talking. Through this conversation we got to know each other. We realized actually we have so much in common -- we grew up in the same city, we were born in the same year.

JN: You were speaking Hebrew together?

YO: We spoke Hebrew together.

ST: Yes. We started in English and then we switched to Hebrew.

YO: Now we speak mostly in Hebrew and sometimes English. It depends on what we start the day with.

JN: As I was leafing through Ottolenghi -- which I have to tell you, I love this book -- the first recipe I went to was m'sakhan. I noticed you changed it from the way your mother made it. M'sakhan is my favorite chicken dish in the entire world. Do you want to explain what it is and how you changed it from your mom's recipe?

ST: It's a roast chicken with spices, pine nuts, onion and lots of sumac and za'atar. They serve it on a bed of pitas. The pita basically soaks up all the flavor of the chicken.

YO: It's the best of everything. It's the meat, it's the rice, and then the bread that soaks it up, it's just heavenly. 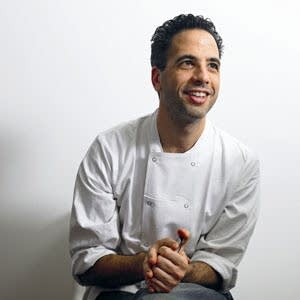