Become a fearless pie baker with this shortcut, press-in crust 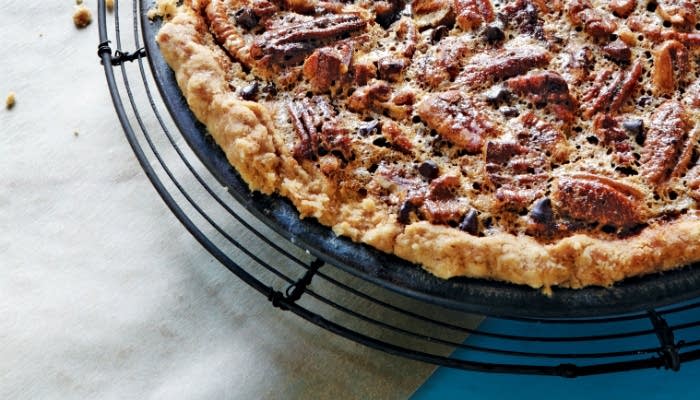 Thanksgiving without pie borders on the unthinkable. If you are afraid of making pie crust or just short on time, Cheryl Day of Back in the Day Bakery in Savannah, Ga., has a solution: a shortcut, press-in crust, no rolling or chilling required.

Lynne Rossetto Kasper: I want to know what's on your Thanksgiving table when it comes to dessert?

Cheryl Day: When it comes to dessert, it's all about the pie in our house. Pecan pie and sweet potato pie are my two favorites.

I do a bourbon pecan pie. My special ingredient is sorghum, which is very popular. I grew up eating it. It's a cross between a caramelized molasses and honey -- that's how I would describe it -- and it is delicious. Use a little bit of sorghum as you would use a little bit of molasses in a recipe. It just works out really great. I actually do that in both of those pies.

LRK: Sorghum goes into the sweet potato pie too?

LRK: How do you do your sweet potato pie? Do you add cream to the potatoes? What's the filling like?

CD: Actually I do -- I add cream and all kinds of spices. To me it's all about the spices and the eggs. You have the basic stuff, cream and eggs, but I love playing with flavors. I think a lot of times people are afraid to play with flavors, but I just really love to do that. Add everything from cardamom and ginger to allspice and cloves -- all the good stuff that reminds you of Thanksgiving.

LRK: That would be wonderful with sweet potato. The sweet potatoes are pureed, then you essentially are making it the way you make a pumpkin pie -- you make a custard?

CD: Exactly like a pumpkin pie. The only thing is that a lot of people don't process their pumpkins. You do have to bake the potato first -- that's the only thing that you have to do --  but you can prepare in advance to do that so it works out great.

LRK: Now we get to the thing that spooks so many people at this time of year. Tell me about your pie crust. What do you do and what are the secrets?

CD: I do have a lot of secrets, but here's the thing: I do a couple of different crusts. There's one that I do that is an old-fashioned, flaky crust that you do need a rolling pin, all that good stuff and a little bit of skill I would say.

But then I decided that I wanted to make fearless pie bakers, so I came up with a crust that is a press-in pie crust. But no one will ever know because you can crimp the edges or pinch them with a fork. It's flaky just like a regular, old-fashioned crust that you have to roll. That's something that I'd like to recommend to people especially if there's that fear of making a pie crust.

LRK: Can you walk us through this press-in pie crust?

CD: I actually call it a shortcut pie crust. Basically all you do is throw all of your dry ingredients into the bowl: the flour, the sugar and the salt. Then you have melted butter and with a fork, kind of like how you would do a graham cracker crust, you'll just mix it together until it looks moist and crumbly.

Then all you're going to do -- it's so funny to even say it really is a shortcut -- is you just dump that into your pie pan. Then you'll press it out just going up the sides. The great cheat is that you can actually crimp the edges or make them really decorative and rustic. There you have it.

LRK: You can throw spices in there too, right?

CD: You could do whatever you want.

LRK: That is so brilliant.

CD: I just know from my experience that it has made a world of a difference with people -- at least them not being afraid. God forbid they get a store-bought crust. They don't have to now.