Avoid bitter basil and garlic with a mortar and pestle

by Lynne Rossetto Kasper
Listen: Avoid bitter basil and garlic with a mortar and pestle
05:03 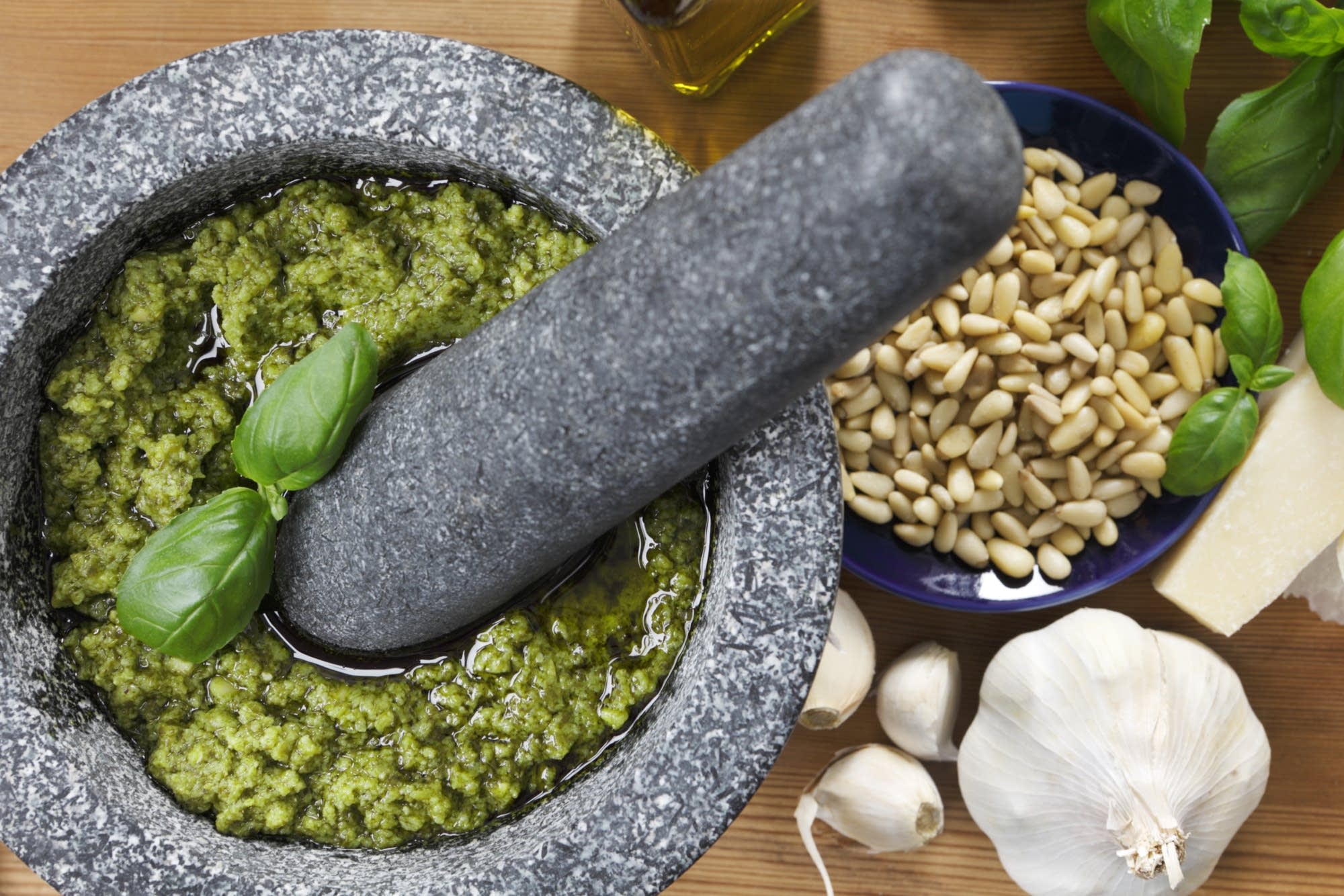 Award-winning cookbook author Dorie Greenspan cannot resist trying out kitchen equipment. She's always test driving something new and analyzing its pros and cons. She explains why she prefers using a mortar and pestle to a food processor.

Lynne Rossetto Kasper: I've rediscovered my mortar and pestle. Do you use one?

Dorie Greenspan: I have a confession to make: I only really started using a mortar and pestle a few months ago. I've had one ever since I've had a kitchen, which is for more than 30 years, and I never used it. I think I didn't use it because I didn't have the right one.

LRK: Did you have one of those little ones?

DG: That's exactly right. I had one of those little ones: very pretty, green marble. But small doesn't work with a mortar and pestle. I got myself a really big -- it holds more than 3 cups -- Thai granite mortar and pestle. That makes all the difference because things don't fly out of it. It means you really can make a big bowl of pesto. It means you really can put a lot of mint leaves in and just work them.

It's weighty so it doesn't jump over the counter in any way. You don't really have to hold it down. I often put a dish towel under it because mine is a very rough granite, just to protect the counter. But that roughness is important too because it helps grind the ingredients.

I use my food processor a whole lot less because I have this mortar and pestle. I'm never giving up my food processor -- it's really efficient, but that's it. It's efficient. It's a machine. When you put lime zest, lime juice, salt, coriander, onions, jalapeño peppers and garlic into a mortar and pestle and you start grinding, the smell is so fabulous. It's such a pleasure to use it. It's fast.

When I'm making guacamole, I'm putting all of those things into the mortar and pestle and just grinding and going around and around, getting that fabulous flavor. The onion and the jalapeno peppers I don't really want them as a paste, but I'm just getting all of their volatile oils, all of their flavors out. Then I'm putting in the avocado and then I stop. I use the edge of a wooden spoon and I just pound it so I get something chunky.

The experience of using a mortar and pestle, of making a hummus, of grinding nuts or seeds or spices, it's such a pleasure. The quality of what you get, that kind of chunkiness, the freshness, I'm really loving it.

LRK: Do you think foods taste different when you grind them in that mortar and pestle?

DG: Call me a romantic, but I do. I am a romantic. You're not chopping, you're pulverizing, crushing, bruising. With ingredients like garlic and basil, you don't get the bitterness that you might get. The color stays better I think as well.

Our son grabs the mortar and pestle and uses it to muddle herbs and things when he's making cocktails. I think it's really funny because he looked at it and he said, "It's a muddler." I said, "No, it's not a muddler, it's a mortar and pestle." But muddling has become so very chic now with all of the designer cocktails.

I think things do taste fresher. It's the texture as well -- it's not as uniform and that's really, really nice.

LRK: What kind do you like best? There's stone, there's marble, there's ceramic and the scariest for me is glass. There's no way I'm pounding glass on glass. What do you prefer?

DG: The little one I had was marble and it was fine. I had a wood one, don't ask me why. I really don't recommend that because they're really hard to clean. Anything you put in wood, the wood retains the oils. I have a stone one now and this is the one that I have such a crush on. It's heavy and the pestle is heavy, so it's very efficient, you don't have to work so hard. It just feels good in your hand.