Remembering the Soviet Moscow of her youth

by Lynne Rossetto Kasper
Listen: Remembering the Soviet Moscow of her youth
06:37 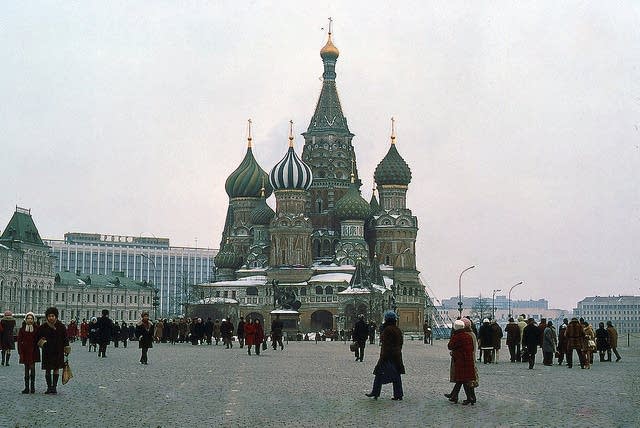 You could call Anya von Bremzen the food and travel writer. She covers the world's poshest, most cutting-edge restaurants for glossy magazines. But this wasn't what she was born into.

Von Bremzen grew up in Soviet Moscow where she was a little girl who dreamed of food in a time and in a place that was a lot like navigating a hall of funhouse mirrors -- nothing was what it seemed. She tells her story and rolls out an epic history of Soviet Russia through its food in Mastering the Art of Soviet Cooking: A Memoir of Food and Longing.

Lynne Rossetto Kasper: You grew up in Moscow. Your mother lived through the years of Stalin, when getting food was an incredibly difficult situation. What was the food like when you were growing up?

Anya von Bremzen: A lot of what I remember now is just this kind of kitschy, retro, institutional food that's popular. But we loved it. For instance, we had pirozhki, the fried pastries, on the street sold by these horrible, scowling women in white coats. We had these big, clunky candies, chocolates with names like Cosmos and Glory October or Mishka the Clumsy Bear. During holiday times they would cut crystal bowls of salat Olivier, the iconic Soviet salad of potatoes, pickles and chicken all decorated with mayonnaise ribbons.

Now it comes across as very endearing. Of course when that's all you ate, I was just wildly fantasizing about foreign foods that I had never tried. For instance, Proust's madeleine -- I remember my mom read me the passages and I was like, "What is this madeleine?" We had no idea.

LRK: In 1974 the two of you came to the U.S. You came with basically nothing. You went to your first supermarket. You talk in the book about a dark truth that you found there.

AVB: It was actually the biggest culture shock because all our lives, we dreamt of abundance. Specifically, we dreamt of America. We imagined bananas growing on trees, we imagined a road paved with Juicy Fruit gum, which in Moscow I black-marketeered -- all these desired, fantasized-about, Western, foreign goods.

I went out into this huge Pathmark in northeast Philadelphia, which was a super suburban area. It was as huge as Red Square. I saw so much food that I felt like I was buried underneath it -- that was like the crash of my American dream. Everyone was buying it without any fuss. You could get anything you wanted: 20 kinds of salami, peanut butter.

My mother was mesmerized by this abundance. She would get Pop-Tarts or something horrible like vinegar-pickled pigs feet and she would experiment with all the stuff. I realized then that American food must be just absolutely horrifying.

LRK: Did it ever redeem itself for you? You are a food writer and you're still here.

AVB: Slowly, gradually. I think I actually lost my sense of taste in the first few months of exile. We left with two tiny suitcases without the right of return. This was our new home whether we liked it or not. Food actually represented to me the pain of immigrant dislocation.

I remember a Christmas with black Oreo cookies with something synthetic inside. Nothing tasted like I expected it to taste. It took me years to really energize myself about food. Also the American food revolution was happening, so the actual food got much better.

LRK: What is the food like today in Russia?

AVB: The Moscow supermarkets, the glitzier ones, really remind me of the depachikas in Tokyo. You have such an incredible array of foodstuffs because they can fly anything in from Europe -- you have ibérico hams from Spain, 12 kinds, you have every farmhouse French cheese. All these women in fancy furs talk about the latest burrata. The whole food vocabulary, there are almost no Russian words. They don't say the Russian word "sparzha" for asparagus, they say "asparagus." It's just so ostentatiously consumerist.

There's another wrinkle: Soviet nostalgia. At GUM department store, the glitzy department store on Red Square, they have a huge Soviet-style supermarket with all those iconic products that we missed when we immigrated. They have conical juice fountains, Soviet-style ice cream, stewed sauerkraut -- all the tastes of our childhood, all the iconic Soviet foods we fled from.

LRK: Is this food available to everybody, or is there still that great schism that existed in the Soviet Union between the rich and the poor?

AVB: At least there was something equalizing in Soviet times where if you were rich, you were secretly rich. We were a classless society, on paper at least. Now it's much more in your face, But at the same time, anyone can go to the supermarket and afford at least a foreign chocolate. It's just like any other second-world economy.

LRK: If you could go back and live there, would you?

AVB: No, at least not in Moscow. The last chapter of the book deals with a deep alienation -- I'm wandering around Moscow a stranger in my own homeland. It was very ironic because my mom and I were invited to do a TV cooking show in Moscow. I recorded the cooking show with an ex-Kremlin chef on Stalin's old china, which was very, very unsettling. But I don't think I could live there.