Okonomiyaki: The Japanese pancake you will want at 4 a.m.

by Sally Swift
Listen: Okonomiyaki: The Japanese pancake you will want at 4 a.m.
05:20 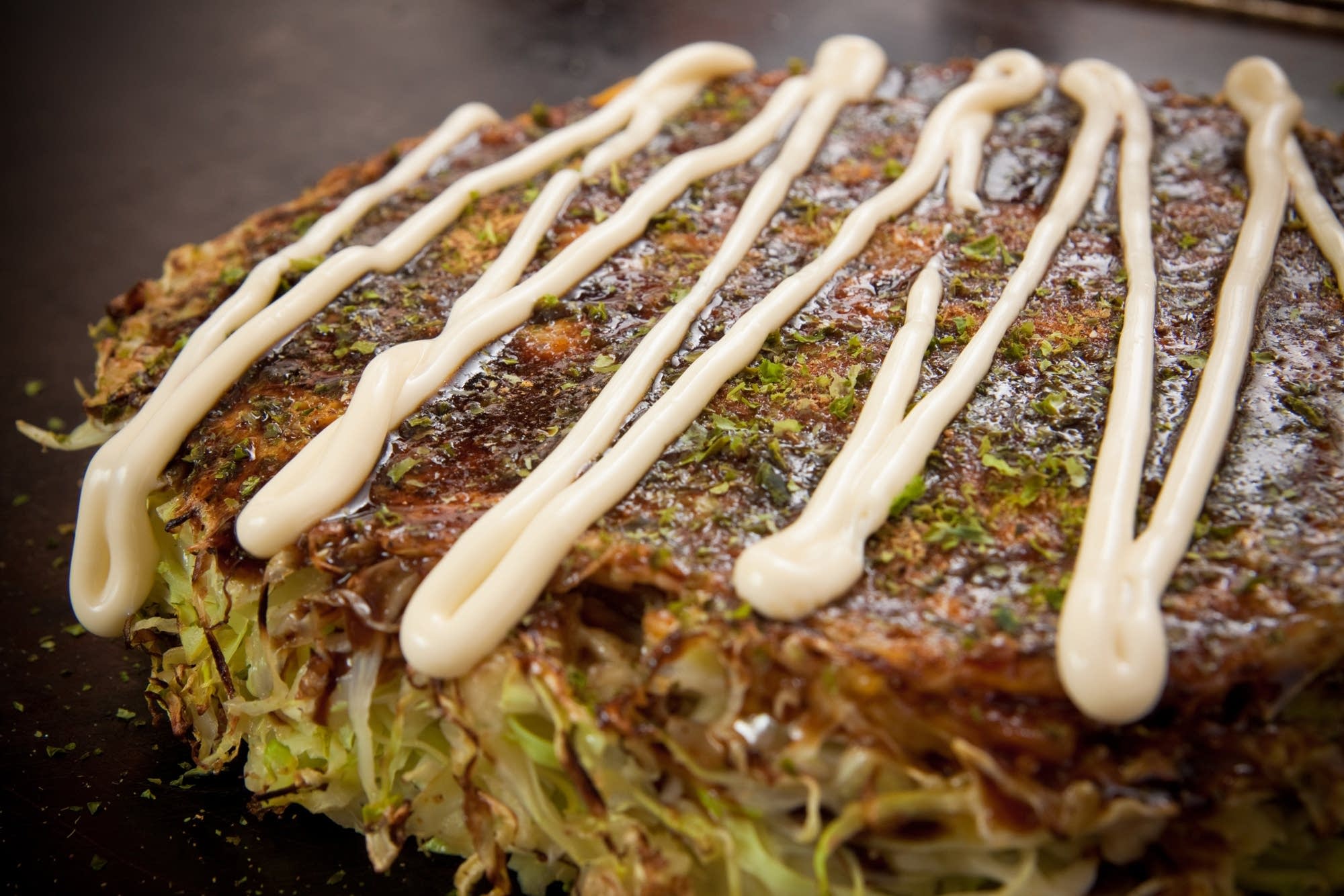 Mention okonomiyaki to anyone who has spent time in Japan and watch their eyes light up. The word literally means “as you like it.” It’s a Japanese street food that some people refer to as a pizza, but truthfully it’s more like a cabbage pancake laced with whatever you would like. Washington Post food columnist David Hagedorn wrote about this pancake in an article called “Hooked on okonomiyaki.”

Sally Swift: You wrote this piece on this strange Japanese pancake.

David Hagedorn: I was visiting a friend of mine, chef Alison Swope at Teaism in Alexandria, Va. She was my mentor many years ago at New Heights -- I was her sous chef. She offered me this pancake. She kept talking about it like I knew what it was. I did the nod like I did know what it was. Finally she stopped, we were staring at each other and she said, “You don’t know what it is, do you?” I said, “No.” So she made one and it was just the most bizarre-looking thing. She told me it was a cabbage pancake; then out came this thing that had bonito flakes on it.

DH: Yes, shaved, fermented, dried, smoked -- they’re shaved so thin that when you put them on top of anything, they dance, so the thing looked alive. It had this mess drizzled all over it, these sauces.

SS: Was it the size of a plate?

DH: Yes, it would fit in the well of a dinner plate. I kept eating it. They more I ate, the more I wanted to eat. It was so delicious that it just stuck in my mind that I would do a story on it. Then I started to see it popping up in different places.

SS: This is the new trend, this Japanese pancake.

DH: It should be. It is one of those street food things and that is what is so popular now anyway. Plus it is inexpensive, so in this economy that’s always plus.

SS: So how does one go about making okonomiyaki?

DH: The name means “as you like it, grilled or griddled” because they are usually made on a flat top or a plancha. It is basically cabbage and lots of scallions, and it’s held together with a flour-based batter that’s made with dashi, which is the Japanese kelp, and bonito broth. Then they put tempura bits in it because the Japanese don’t like to waste anything.

SS: The remains of tempura batter?

SS: Are there eggs?

DH: Egg binds the whole lot. From serving tempura in restaurants, they would take the bits that float to the top and keep them -- you throw those in. They are actually an interesting counterpoint because the cabbage is steamed and softened, then you get that crunch of the tempura.

DH: It is delicious. They put these two sauces on it: the okonomiyaki sauce is basically a Worcestershire-soy sauce-ketchup blend -- it is very sweet, then this Kewpie mayonnaise, which is their Japanese Miracle Whip. It’s made with seasoned rice vinegar, so it has that tang and sweetness too. They really go to town drizzling this stuff. Alison did it in hatch marks then finished it with bonito flakes and scallions.

SS: Is this a regional dish in Japan? Does it exist all over the country? Does it have different regional tastes?

DH: It does exist all over the country. It is kind of like pizza -- some people call it the Japanese pizza, though it is more like a crepe. There are different styles all over Japan and if you speak to Japanese people, they will be very vociferous about this. But one of the two major styles is the Osaka style, which is the kind of pancake that Alison served and Kaz Okochi from Kaz Sushi Bistro here in Washington, D.C., whom I also consulted, served. The Hiroshima style is more like layers of crepes -- they even throw in some noodles sometimes, so it is the whole kitchen table.

DH: Absolutely. When I was experimenting with them, I made a lot of them. They heat up -- it’s not the same as making them fresh -- but you can zap them for a few seconds and they are OK, especially at 4 in the morning.